From the Crikey grapevine, the latest tips and rumours …’

Labor MPs show their acting chops. While Ms Tips chose not to partake in Strewth’s Killing Season Drinking Game last night (some of us like our livers and plan on having them until we die), we did greatly enjoy the second instalment of Sarah Ferguson’s documentary on the implosion of the Labor Party. The doco rides on the veiled insults of Kevin Rudd against everyone else in the ALP, but our favourite bit has to be the reenactments by current Labor MPs as they re-live their involvement in the coup that brought down Rudd. While Tony Burke just walked around Parliament House and Wayne Swan looked serious on the phone, Sam Dastyari made the effort to find a park bench in Lonsdale Street in Melbourne to show just how it was when he got the polling numbers that moved the spill along. Only problem is, he was using an iPhone 6 and they weren’t available in 2010. Even with a little historical inconsistency, we hear Hollywood calling. That look of concern will go far.

Brandis kicks back. A tipster tells us that while Arts Minister George Brandis has time to read poetry during estimates, there are other parts of the sector that are waiting on his signature:

“The replacement for the CEO of the Australian Film Television and Radio School Sandra Levy has yet to be announced. Levy’s term is up on 26 June. This has not however shaken or stirred George Brandis into action. As well, his spin doctors are still peddling nonsense about him ‘approving the appointment’. He has before him a recommendation from the School Council to appoint someone and the AFTRS Act gives him little room for movement as to what his role in the process is. Whomever it is won’t have a lot of transition time.”

Sandra Levy has been at the school for a number of years and announced her retirement this year. We asked Brandis’ office why there had been a delay in confirming the appointment but didn’t hear back by deadline.

Like father, like sons. It’s a happy time for the Murdoch family, with Rupert promoting his eldest son, Lachlan, to the role of executive co-chairman and James to CEO. In a joint statement the two junior Murdochs said: “We are both humbled by the opportunity to lead, with our father and the talented team of executives at 21st Century Fox, this extraordinary company.” It was probably not the best choice of words, since the humble Rupert Murdoch said it was the “humblest day of my life” when he fronted a UK government committee on phone hacking.

People watching in Melbourne. We hear from a tipster:

“John Howard was escorted through Victorian Parliament’s Queens Hall during ALP life members gathering today (16 June 2015) paying tribute to Joan Kirner. No doubt up to no good in Liberal Party back rooms. John Cain, who was MC, hardly raised an eyebrow.”

And people watching in transit from Melbourne to Canberra. Another tipster writes:

“Deeply pissed off to see Andrew Robb and an adviser (still using her ABC Radio luggage tag) in business class on the short-haul MEL-CBR flight on Monday. Perhaps they needed to conduct business, you say? (Something public servants are able — and expected — to do in economy.) The whole cabin did hear a perfectly audible ten minutes worth of discussion of matters better conducted in the office. I saw one lady take out her headphones and lean forward to follow along. Though I missed whether the Hunter Valley thing got fast-tracked after all. After ten minutes, silence, so again, no need to have travelled business class for that. As someone who pays for my own travel, and flies economy for work, I am angered by the waste of my taxes and the rudeness and indiscretion of the Minister.”

It’s not really a big deal for our pollies to be seen in business class to and from Canberra — many are upgraded by the airlines (which are declared in their register of interests), and all are members of frequent flier clubs — someone like Trade Minister Andrew Robb probably has enough points to get to the moon and back. But pollies probably should remember that there isn’t a soundproof wall between them and the plebs in cattle class and Ms Tips has eyes and ears everywhere.

The Espy’s cultural heritage. The iconic music venue in Melbourne the Esplanade Hotel was closed last month for renovations, shocking many in the music community — some bands had their gigs cancelled. We heard from a tipster that the venue wouldn’t be coming back as a music venue at all, but would be a huge Asian restaurant with only the Gershwin Room (home of SBS music quiz show Rockwiz) surviving. We’ve been investigating and are told that it’s not true that the Espy will be without music when it reopens. According to our source, it will be back with multiple band rooms, but there will be a much bigger focus on food than before. Like many of Melbourne’s live music venues, it seems the Espy has found it needs to make hipsters pay for fancy burgers or fried chicken to stay afloat. There’s no news on whether the sticky floors or smell of beer will survive the renos — we think they should be heritage listed.

Not like a regular MP, a cool MP. It’s game two of State of Origin tonight, and this morning pollies from Queensland and NSW battled out their own match in the rain, with Queensland coming out on top (a symbol for tonight, perhaps?), but we like this tweet from Terri Butler. 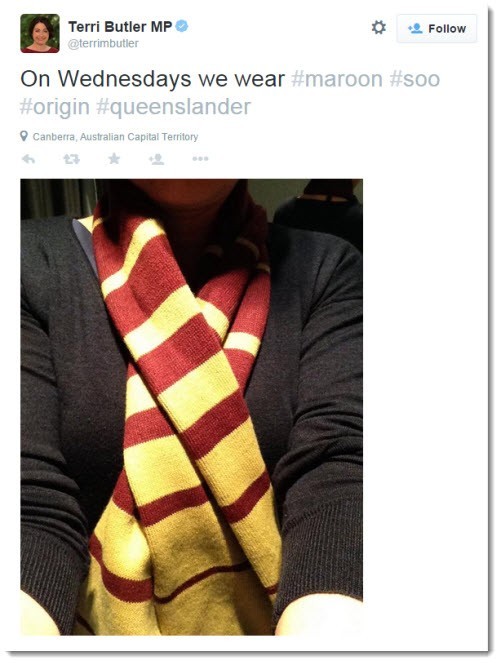 Dastyari makes me cringe. So little substance to the show pony.

Mini Mr Bean but unfortunately, unlike the original, he apparently evolved on this planet so there is clearly something wrong with the gene pool.

I guess it won’t matter to sang-froid and AR but Dastyari has been the major Parliamentary influence in protecting and defending ordinary citizens who have been the victims of deficient or corrupt financial ädvice”.