Run for cover, Donald Trump is really running for president 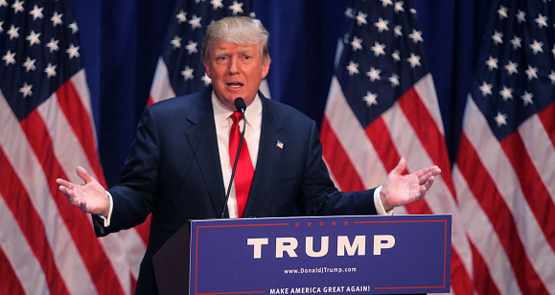 With the news overnight that Donald Trump will run for the Republican nomination for United States president, life on planet Earth just got a little stranger.

Pity starchy, serious Jeb Bush — whose own presidential announcement on Monday has been well and truly stomped on. Unlike Jeb!, Trump needs no exclamation mark after his name, and in hindsight, the garish real estate mogul’s threats to run should have been taken more seriously this time. He’d formed a presidential exploratory committee. He’d hired staff in Iowa, New Hampshire and South Carolina. He even shelved the next series of The Apprentice.

Still, Trump should long ago have been locked behind bars as a serial presidential tease. He blabbed about running in 1988, 2000, 2004, 2008 and 2012. Four years ago, he built up a serious head of steam with the GOP base by harping on Barack Obama’s birth certificate. The taunts dried up when Obama unexpectedly released it — and Trump slunk away, credibility in ruins, seemingly never to seek the bully pulpit again.

Now he’s back, flanked by wife Melania and daughter Ivanka, brandishing $8 billion of net worth and proclaiming he’ll obliterate Islamic State, be the “greatest jobs president God ever created” and “make America great again”. And he’s already headed to Iowa. Predictions are foolhardy, but one can safely be made. Ignore Trump’s high unfavorable ratings and the 59% of Republicans in a recent poll who say they’d never vote for him. That remaining 41% can do a lot of damage. Expect Trump — with his coming blitzkrieg — to ascend from the 5% he is currently polling to near the top of the splintered Republican heap. And to remain right through the first GOP primary debate in Cleveland on August 20 — allowing him to make his case before a national audience before his inevitable immolation down the track.

For Republican powerbrokers, the prospect of that first debate now looms as a reality TV nightmare: Trump’s likely appearance the equivalent of a madman with a bazooka crashing the stage and making everyone else look sane by comparison.

Such a task is harder than it looks, with at least half the GOP field really running to secure a book deal or a regular segment on The Sean Hannity Show — with no hope of actually winning the nomination, whatever their transient appeal in the race.

This season’s cast includes African-American neurosurgeon Ben Carson, who has described Obamacare as “the worst thing since slavery” and became a folk hero among conservatives after he mouthed off at President Barack Obama at a National Prayer Breakfast. With zero elective experience and a contentious tenure as Hewlett Packard CEO, Carly Fiorina’s sole role seems to be troll Hillary Clinton and allow the GOP to shove a female face on stage. The notion of Lindsey Graham as commander in chief is ludicrous. Rick Perry’s new glasses fool no one. If they weren’t running for president, Rick Santorum and George Pataki would probably be muttering somewhere in a public park. Governors Bobby Jindal (Louisiana) and John Kasich (Ohio) have credible cases — but they’re late to the rodeo, and in a GOP that tends to nominate familiar, tested names, both lack the star power to burst through such a crowded field.

That leaves seven plausible nominees, each looking to break out of the pack by winning one of the early nominating contests next year like Iowa or New Hampshire and gaining momentum for the grueling primaries that follow.

The best prospects for Iowa include Scott Walker, governor of neighbouring Wisconsin, whose grasp of foreign policy looks shaky but who has impressed conservatives by the unpretentious way he has taken on labour unions and won three successive elections. With its deeply evangelical electorate, Iowa is also pivotal for firebrand Texas Senator Ted Cruz and 2008 caucus winner Mike Huckabee — anything less than a top-two finish in the caucuses would dash expectations and be near-fatal to their chances.

The second category of candidates include Bush, rambunctious New Jersey Governor Chris Christie and libertarian Kentucky Senator Rand Paul — all with little hope of winning Iowa, and for whom the more moderate, flinty state of New Hampshire is a better target. Then there is Florida Senator Marco Rubio — a gifted communicator with a stirring biography as the son of Cuban exiles. At 44, he offers the best chance of a generational contrast with Hillary Clinton, the potential to steal Hispanic support and the must-win state of Florida in the general election. Yet at this early stage Rubio lacks an obvious reservoir of support within the GOP base. As the race unfolds, he must define himself better to the electorate and find primary states he can win.

Of course, what effect Donald Trump’s dramatic entry to the race has on these calculations is anyone’s guess. Will he train his fire on Hillary or reserve his juiciest spitballs for his Republican rivals? And should they — terrified of his tongue –play nice and laugh along, or try to take him out themselves? One thing’s for sure. The GOP race was already shaping as a wild rollercoaster ride. Trump’s entry blows the hinges right off.

Or is he just chasing his hair piece?

He has no shame, will say or promise anything and self immolate in the first interview not conducted by a lickspittle – assuming any such there be.

Hmmm, any serious contender needs a running mate. How about Kim Kardashian?

Hmmm, any serious contender needs a running mate. How about Kim Kardashian?

Nope, think of the combination Trump and Sarah Palin. Guaranteed to energise the crazy Republican base.