Off Brand: let’s hope this revolution doesn’t catch on

Making Russell Brand the face of your work has its ups and downs. Mostly downs. 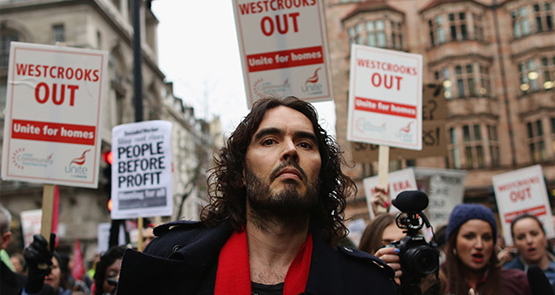 The Emperor’s New Clothes is an odd fit in the CV of English writer/director and art house darling Michael Winterbottom, best known for comedies and provocative dramas. It is a Michael Moore-style polemic that takes aim at British bankers and decision-makers — particularly in the context of corporate and billionaire tax evasion — and casts the famously yappy actor-comedian-fashionista Russell Brand as presenter and narrator.

Before we look at Winterbottom’s new film, which feels frighteningly like the thin end of the wedge for a new wave of celebrity-driven non-fiction filmmaking, let us recap with a potted summary of how Moore — master of leftist mass-consumed documentaries — came to the craft.

Moore was raised in a working-class neighbourhood in Flint, Michigan, the son of an automobile assembly-line worker and nephew of one of the founders of American labour union United Automobile Workers. He was a precocious and pugnacious teenager — at 18, the youngest person ever elected to his high school’s board — and in his early 20s found an outlet for expressing his political views (which over the years have generally focused on oppression in one form or another) by creating a weekly magazine.

Moore’s first documentary, 1989′s Roger & Me, explores the economic impact of General Motors closing Michigan auto plants and putting tens of thousands of employees out of work. It encapsulated the kind of work the rabble-rousing journalist had spent his entire young adult life building towards. He was deeply (and personally) knowledgeable in the subject, well researched and highly practised in engineering persuasive arguments from a moral high ground.

Perhaps it reflects something of the times that Winterbottom cast Russell Brand as the presenter of a film about wide-scale economic injustice in the UK — and perhaps the word “cast” is key to why The Emperor’s New Clothes struggles as a work of socio-political commentary.

Brand rose to fame as the host of Big Brother spin-off (appropriately named “Big Mouth“), starred in films such as Get Him to the Greek and 2011’s remake of Arthur, and periodically finds himself at the centre of mischief, often of an extremely childish kind: this is a man who taunted actor Andrew Sachs (most famous for playing Manuel in Fawlty Towers) with crude answering machine messages boasting about having slept with his granddaughter.

He is also someone who periodically uploads videos of himself blabbering into a webcam in a dressing gown, inevitably receiving squillions of hits on YouTube. Which is to say, celebrity of a very contemporary online-era ilk — undoubtedly talented at something, though nobody, least of all himself, seems to know what.

In The Emperor’s New Clothes, Brand stands in front of a bleached white screen looking like a photoshopped, hipstery Jesus, barking commentary while text inserts flash key words and bursts of extreme colour add some sensory bling. Note that Winterbottom is credited as writer — evidence Brand has been cast in this role, as a presenter infusing somebody else’s words with a trademark style. In this case, Brand’s distinctive high-pitched machine-gun whinge.

Brand’s, well, brand, is something Winterbottom can only wholly embrace, understanding that the keys to the kingdom have been handed over to a celeb potentially minutes away from a fresh scandal or an announcement that he has been cast as the voice of a manic side character in a new movie featuring talking animals.

In other words, The Emperor’s New Clothes has a big credibility problem before audiences so much as contemplate whether they want to listen to what Brand (or Winterbottom) has to say. There’s a good reason ABC TV recruited George Megalogenis to develop and present Making Australia Great: Inside Our Longest Boom rather than, you know, Wil Anderson.

Political commentary is not just an uneasy fit for the loud-mouthed, long-haired celeb, but an area with which he has demonstrated himself to be ignorant, at best. This is despite writing a book on the subject, Revolution, described by The Guardian book critic Nick Cohen as “long-winded, confused and smug; filled with references to books Brand has half read and thinks he has half understood.”

Brand’s much splashed-about idea to instigate a “revolution” by not voting is dumb for several reasons, the most obvious being that under the current system fewer votes from one side of the political divide means more (disproportionate) power and influence to those who vote from the other. Also, he reneged on it and urged supporters to vote Labour at the last UK election.

But that conversation has been barfed up enough already; the point is that dressing a serious film with a colourful presenter who has little to no credentials in the subject they are talking about undermines the messages at the heart of it. That is hardly a revelatory observation, but in the current environment — with on-the-dial television facing more pressure than ever to generate big ratings and the cycle of celebrity arguably more fickle than ever — it is something audiences should keep in mind. Also, something they can rally against by changing the channel or purchasing a ticket to something else.

The Emperor’s New Clothes has serious points to make about greed, inequality and Britain’s pepped-up plutocrats but Brand’s show pony presence and pointless antics (lecturing a bunch of primary school students? Really?) diminishes the integrity of the production.

While the decision to brand the documentary with, well, Brand may have made it more appealing to a younger-skewing demographic, arguably spreading the message wider than the people who already understand its implications, that is a very slippery slope indeed. Let us hope this particular “revolution” — to misuse the word in a manner perhaps befitting of its star — does not catch on.