The importance of journalistic fact-checking. And other media tidbits of the day.

Lachlan given the keys to the kingdom. The reshuffling of the Murdochs at 21st Century Fox starts July 1. It’s official, after the company’s board met and rubber-stamped the changes overnight in the US. However, there are some subtle changes to the arrangements that indicate that of the two sons, Lachlan and James, the former is the preferred, as James will have to share control of key parts of Fox with his brother.

James Murdoch becomes CEO on July 1 and Lachlan moves up to be co-executive chair with dad Rupert. Additionally, Chase Carey, the chief operating officer (and senior to James) is being promoted to executive vice-chairman for the period to June 30, 2016, and will be “actively engaged in supporting Lachlan and James as they step in to their new roles,” Rupert Murdoch said in the statement from Fox early Wednesday morning, Sydney time.

But in a major difference to what was leaked late last week, Lachlan will have more power than originally thought. Fox’s Corporate functions, global TV and film operations will report jointly to him and James. That sharing of a key role means Lachlan will be more influential than James.

And Lachlan will also have a say in Fox’s mainstay, the hugely profitable cable operations — its earnings powerhouse. Just who oversees these was not mentioned in this morning’s statement, leading to the initial suggestion that was to keep Roger Ailes, the head of Fox News, away from Lachlan after their falling out a decade ago. Ailes told Variety late last week he would still report to Rupert Murdoch. But Hollywood Reporter said this morning that Ailes would report to both Lachlan and James Murdoch, and continue to deal with Rupert Murdoch.

Ailes (who is 75) only has a contract at Fox News until the northern summer of 2016. It’s widely reported that the Fox News boss and the Murdoch sons do not hit it off. — Glenn Dyer

Journo maths not good enough. Journalists are notorious for inadvertently and unintentionally stuffing up their use of statistics, but it appears such errors can now get the Press Council on their case.

The Australian Financial Review has lost a Press Council adjudication after a September 2014 analysis piece by journalist Fiona Smith defined the 18.2% gender pay gap as being the average difference between what male and female workers make for the same roles and hours.

“It defies reason, but the gender pay gap (the difference between what men and women are paid for the same jobs, same hours) is growing,” the article states. That’s not what the 18.2% figure refers to, the council noted. The figure comes from the federal government’s Workplace Gender and Equality Agency, which defines the “national gender pay gap” as “the difference between women’s and men’s average weekly full-time equivalent earnings, expressed as a percentage of men’s earnings”. So, it’s not men and women being paid differently for the same work, but rather men and women being, on average, paid differently across the economy as a whole.

In the adjudication, the Fin conceded the opinion piece had got it wrong, but said it would have been happy to publish a letter to the editor to that effect. The council didn’t think this was good enough, stating in its adjudication:

“As this method was made clear in the agency report itself, and the difference is of considerable significance, the Council has concluded there was a failure to take reasonable steps to ensure factual material is accurate and not misleading. Accordingly, there was a breach of the Council’s Standards in this respect.

“The Council’s Standards require a publication to provide a correction or other adequate remedial action if a significant inaccuracy occurs. In this instance, the publication failed to do so even after the inaccuracy had been brought to its attention by the Council.

“Where an inaccuracy is significant and not reasonably disputable, as in this case, it is usually necessary for the publication to make the correction in its own name rather than to treat it as if just a dispute between two opinions that can be remedied adequately by publishing a letter to the editor. Accordingly, the Council has concluded that there was a breach of the Standards of Practice in this respect.”

Would you follow them off a cliff? Yesterday, Mumbrella reported that the AFL was in negotiations with Google about broadcast rights. The scoop was quickly picked up by rival outlets, including the Herald Sun and the Age, but Mumbrella had gotten confused. A later clarification noted Google was in negotiations with the NRL, not the AFL, which is a rather important detail in the grand scheme of things. But it was a useful error for showing how large media outlets these days operate — they’ll repeat an important report in a rival outlet without first checking if it’s true themselves. One of the many pitfalls of digital-first publication. Although, it’s worth noting, the Herald Sun’s report did at least quickly include a “refuse to comment” quote from the AFL. 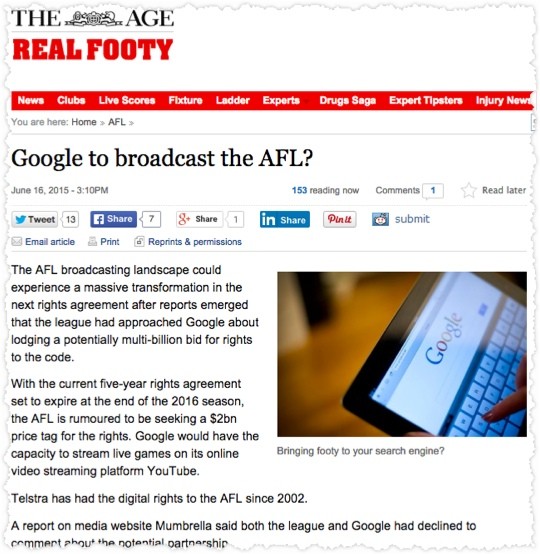 The Age’s original report, and below, the Herald Sun’s. 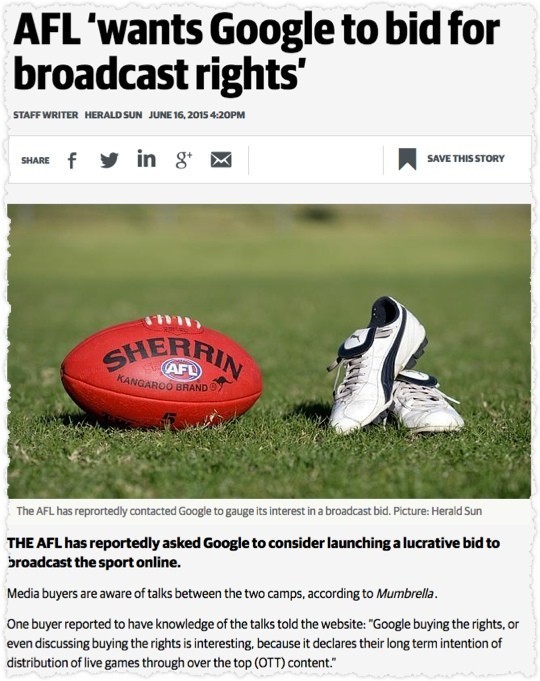 This morning’s papers did have comprehensive, independently-researched stories on the development. — Myriam Robin

Should’ve hired a room. Speaking of digital-first publication, Fox News has had rival media organisations report the guts of its exclusive interview with Jeb Bush, after conducting it in front of other journalists earlier in the day. In the interview, Bush mocked Hilary Clinton, distanced himself from his brother’s sanctioning of torture (“advanced interrogation techniques”), and said he hoped the Supreme Court voted down gay marriage.

“The Fox interview will be broadcast on Tuesday night, but it could be overheard by reporters standing nearby,” the New York Times‘ report states.

At events, journalists from rival organisations will typically work in close proximity with each other in specially designated media areas. It’s seen as rather poor form to use this to scoop your opposition, so the NYT came in for some criticism about the piece, but the Daily Mail US’s political editor came to its defence, noting that the interview was conducted on stage and many other journalists had also heard and used information from the interview. “It was taped on stage. In front of a live audience. And about 100 journalists,” David Martosko tweeted. The Daily Mail was one of several outlets including the Times to report the comments before they aired. Which just goes to show Fox should have hired a room. — Myriam Robin

Front page of the day. The money shot … 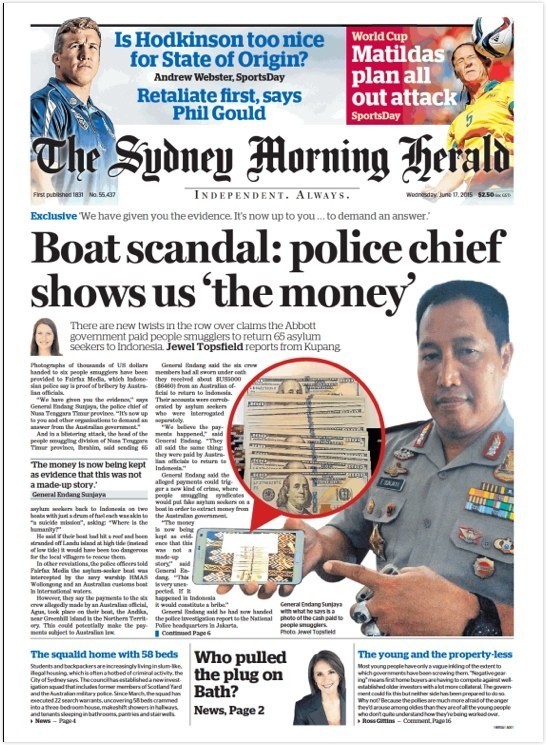 As an analyst who used to provide the statistics that went into the gender-pay gap report, and who knew what they were really saying, I’d be surprised if there were many people in Australia who understood them.

It is my belief that the WGEA markets the statistics in a way that would easily lead to the layperson, and innumerate journalists in particular (most of them), not quite understanding what it is that those statistics are reporting.

It’s a gender pay gap, and as reported here, is a comparison of all earnings, not a job by job analysis. Many women have misunderstood them and assumed they mean that women are being paid 18.2% less than men.

That is not what the statistics are showing. One day I might write an article for Crikey clarifying exactly what they do say, and having defined the problem properly, offer some solutions.