It was all about Delly and Abbott in this week's media coverage.

The Prime Minister’s media coverage more than doubled this week as coverage on counter-terrorism was joined by the controversy over whether Australian agents paid people smugglers to turn their boat around and return to Indonesia. The government has refused to discuss any details around the issue, and the already heavily strained relationship with the Indonesian government took another hit in the wake of the claims. Meanwhile Opposition Leader Bill Shorten was forced to fend off allegations of union fraud while he was an AWU official.

The Labor Party seems to have handed new Greens leader Richard Di Natale exactly the kind of “moderate moment” he was looking for by opposing the tightening of the assets test on pensions, allowing the Greens to do a deal with Social Services Minister Scott Morrison that will see an increase in the base rate along with reduction or removal of the pension for 300,000 or so at the higher end of the assets range.

The continuing debate over housing affordability and the opposition commitment to have a look at negative gearing arrangements by possibly restricting it to new home purchases, and discussion of a bank levy, pushed Finance Minister Mathias Cormann up the list, while Education Minister Christopher Pyne moved into the top ten mainly because of his comments around getting tough on ISIS, without specifically backing the idea of removing citizenship. 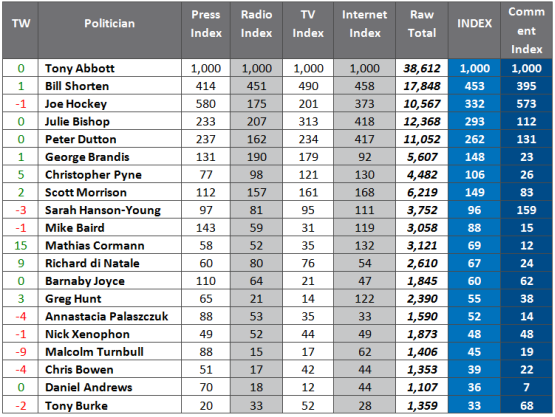 A big jump ahead for the PM on social media as well, mainly around asylum seeker and citizenship issues, although the Treasurer, Joe Hockey maintained a healthy level thanks to ongoing discussion of his comments on home ownership.

The union allegations against Bill Shorten got plenty of play on talkback, but he was still far behind the P.M, with same sex marriage joining counter terrorism among the main issues.

It was the classic sporting story of the little Aussie battler stickin’ it to the big men, as Matthew Dellavedova harried, hustled and elbowed his way to a key role in the Cleveland Cavaliers first win in the NBA finals series, needing an IV after the game.