What really went on at Brandis’ terror talkfest

The bluster of stuffy ministers was all the cameras showed. What you may have missed was the diligent, entrepreneurial work of savvy hackers. 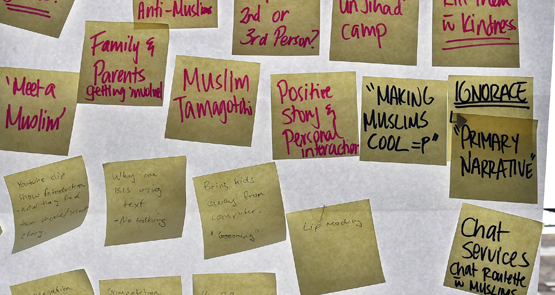 Ideas on the drawing board as part of the CVE “hackathon”

Nestled in a quiet corner of Walsh Bay in the shadow of the Sydney Harbour Bridge is a row of old grey-brown buildings that look like something out of the Great Depression. One of these has two doors that occasionally open to allow well-dressed persons to enter or leave. Once the doors shut, the building is camouflaged among its neighbours. This is the Pier One Hotel. You could drive past it a few hundred times and hardly notice it was there.

But if you approached it during the second half of last week, you’d find the place overrun with people in NSW and Federal Police uniforms and those scary 007-style earpiece thingies. Take a walk inside (if you could get past the strict security), and you’d find plenty of blokes (and the odd female) in serious suits gathered for an important symposium.

And indeed they were. For this was Australia’s Regional Summit to Counter Violent Extremism. Or CVE, as it’s now referred to. Not quite an acronym, but less confusing than ISIS or ISIL or IS or Daesh.

Also present were lots of camera crews, journalists, backbenchers, a few ministers and the Prime Minister. And zero Indonesian politicians. If you stood outside and relied on the daily papers, you’d think the entire summit was about building massive walls around civilisation to keep the IS hordes out.. But if you managed to attend any of the workshops or spoke to the delegates or were even just a fly on the wall, the message would have been a bit garbled.

The real point of the conference was diverting vulnerable young people from IS. As we all know, millions of Australian Muslim kiddies are slipping out of their Lakemba homes to join Caliph Ibrahim without first seeking written permission from the Attorney-General.

In case you hadn’t noticed, it was all about young people. People of the same age bracket as, say, my nephews or Tony Abbott’s daughters. Young people who didn’t address any workshops or seminars, whose opinions weren’t sought on why they might be tempted to join “the Death Cult” (and no, I’m not talking about the heavy metal band from Zurich). Young people who were almost completely absent from the conference. Almost.

Huddled in a quiet room was a small group engaged in the HackAbout project. Yes, it was partnered with the Attorney-General’s Department and the US State Department. Yes, two of the organisers were former US State Department staffers. But this wasn’t about governments. Rather it was about young people harnessing their energy, expertise and passion to find innovative ways to counter the narratives of violent extremists. All violent extremists.

(Among the older participants was a former white supremacist who was, in fact, part of the winning team. Another of them was yours truly, who has had some experience with what some may call “Islamofascism”).

The theory behind the “hackathon” was to create a product that would combat violent extremism and bigotry. Why both? Because they are, effectively, two sides of the same coin. Because they feed off each other.

The participant hackers (or hacks, if you like) included uni students with gaming, graphic design and IT experience. The elder statesmen and stateswomen included Anne Aly of Curtin University and two entrepreneurial types from the US, one of whom founded the world’s largest online directory of halal restaurants. Eat your heart out, Cory Bernardi.

The result of three days of effort was four products, including an app and a game. At this stage, two products will be incubated for further development.

The four groups made a business case for their product to summit delegates. The presentations were also streamed to a global audience who also voted for the winning product. My group’s idea came third, and I take full responsibility for none of it. The winning group, led by Yassmin Abdel-Magied, who works as a FIFO mechanical engineer on oil rigs, came up with a product called Pentor. You might think it’s a new anti-depressant, but actually it’s an app that operates like Tinder, except you’re searching for a mentor and not someone to engage in horizontal folk dancing.

And what did I learn from my HackAbout experience? Well for starters, never engage in such activity when on your second round of antibiotics. But more importantly, I am an old man getting older. I have a lot to learn from those younger than I, and so do out politicians. Because while the delegates were giving speeches, the young folk were developing strategies and products that were tailored for young people to help them shape their lives, without reaching out to violent extremists. No homes were raided. No passports cancelled. No control orders were necessary.

Rundle: the dogs of war are off the leash

How the West can defeat Islamic State

I hope something positive comes out of all that then because I have no idea what the talkfest produced.

“…one of whom founded the world’s largest online directory of halal restaurants. Eat your heart out, Cory Bernardi…”

But could it be that his heart has been declared halal? By secret fatwa. To encourage the faithful to eat it. Or to induce him, should he eat it, to contribute to IS.

CVE is typical old fart B/S but I doubt that there is any viable countervailing strategy.
No-one who goes DAESH sprang from the green turf fully lobotomised – they would have been nurtured in the Petrie dish of religious ratbaggery in the first place.
All religious indoctrination of children should be regarded as child abuse.
The costs to society in general can be seen in Parliament – never mind opening with a xtian prayer, it has a cross party Prayer Group, FFS!

Yep and meanwhile we piss billions of dollars up against the wall to feed the childish delusion of “my make believe friend in the sky has bigger bits than yours and we are going to blast you into the stone age to prove it”.