Triple threat: Hezbollah versus Israel and the Islamic State

Hezbollah is an organisation divided as it fights two "existential threats". Is this all just rhetoric? Freelance journalist Tim Robertson reports. 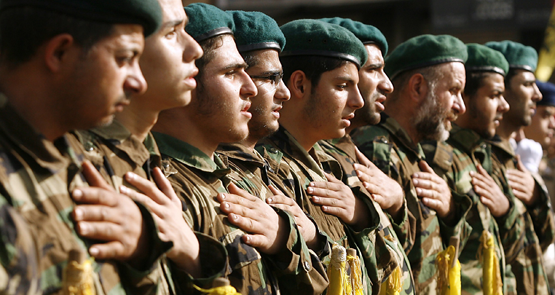 There’s an old joke by the humourist Stephen Potter about how one should deal with those who claim to be experts on a particular country when one knows very little about the subject. Listen intently as the expert authoritatively walks you through the minutiae of the country’s history, politics and culture. Then, once he’s finished, respond, “But surely things are different in the south?” They always are. He will thus be forced to readdress all his broad generalisations and assumptions.

And so it is in Lebanon. Travelling south from Beirut into the Shia heartland, there’s a very discernable change in atmosphere. The billboards advertising Beirut’s newest beer are replaced with posters of martyrs superimposed in front of the Al-Aqsa Mosque. This is what the Western media often dubs “Hezbollah territory”. Walls are adorned with portraits of Hezbollah leader Hassan Nasrallah, Iranian Supreme Leader Ali Khamenei and former Iranian supreme leader Ruhollah Khomeini. Hezbollah’s yellow flags flutter from light poles, the women are increasingly veiled, and the world of the Mediterranean — tans, wine, leisure and bikinis — seems as far away as Majorca.

Western governments have long painted Hezbollah as an Iranian-backed terrorist organisation. This fits well with the pro-Israeli narrative, but it obscures the reality. The organisation has undoubtedly committed “terrorist acts”, but it is also a political and social organisation with wide popular support. And its militia (or army, as some prefer) has always been primarily a resistance force against an expansionist and much better-equipped Israel.

In 2000, Hezbollah drove Israel out of southern Lebanon, a land Israel had been occupying since 1982. To mark the 10th anniversary of that victory, Hezbollah opened a museum — the Tourist Landmark of the Resistance — in the old front-line town of Mleeta.

The trenches Hezbollah militants dug, and the caves they hollowed out of the mountains have been preserved for tourists. The site is filled with old military hardware — tanks, guns, rocket launches, grenades, Jeeps, helmets, the works — a wonderful lookout point over the reclaimed Lebanese territory and an introductory video presentation.

It’s as if Saving Private Ryan had been made on a $1000 budget. The soundtrack, put together, one imagines, with the simple brief “to inspire”, is like a death metal band’s interpretation on the Rocky theme. But it’s not all rocket launchers and aerial bombardments — the action scenes are periodically interrupted by Hezbollah Secretary-General Hassan Nasrallah sermonising about resistance, martyrdom, occupation, Zionism and religion.

Hezbollah’s victory over Israel and the IDF’s subsequent retreat marked a high point for the organisation in the eyes of both the Lebanese and the international left, who understood that, unless halted, Israel — supported by the United States — would continue to act in the region how it wished.

But since then, Hezbollah’s star has waned. It, along with Syria’s President Bashar al-Assad, has arguably been the most significant public relations failure to emerge from the 2011 Arab Spring/Awakening (Assad for far more obvious reasons). Rather than side with the masses calling for more just, fair and representative Arab governments, Hezbollah chose sectarianism — the very thing those in the streets were so tired of — and expressed unwavering support for the Shia-led regimes in Syria and Iran.

The brutality with which the Assad responded to the protests and his continued ruthlessness in the ongoing civil war has shocked the world. Hezbollah has, therefore, found itself increasingly alienated. Its resistance to Israeli expansionism has not been forgotten, but its unquestioning support for tyranny is, increasingly, in the forefront of people’s minds.

But now, in the fight against the Islamic State — a Sunni organisation, and the only group in the region deemed more brutal than the Assad regime — Hezbollah again has the chance to position itself as a force of resistance. And Nasrallah knows it — he is becoming increasingly more prominent, making speeches and appearing on camera calling on his supporters to rise up and fight against this “new evil” (it should be noted that Hezbollah is also fighting the other rebel groups; in fact, that’s where most of its resources are currently deployed.)

If the Shia militias are defeated, the already waning conception of Hezbollah as a resistance force and not an increasing sectarian and fanatical organisation may well be shattered.

Walking through those old trenches in southern Lebanon one is also reminded that there’s another “existential threat” facing Hezbollah on the other side of the distant hills. The current Israeli-Lebanese border, my ex-fighter-turned-guide tells me, is just 60 kilometres away.

And while there is an uneasy calm on the border at the moment, the two countries are still very much enemies. (If you’re interested in testing this, I recommend travelling to Israel with a Lebanese stamp in your passport. You’ll find yourself interrogated and, if you’re lucky, released seven hours later.) There are many on both sides of the border who believe that it’s not a matter of if there will be another conflict, but when.

In an article published in The New York Times on May 12, an unnamed “senior Israeli military official” warns that Hezbollah is building up its military firepower and fighters are increasingly using civilian infrastructure as cover — or, in the kind of sinister hasbara rhetoric of the last Gaza war, as “human shields” — just north of the border. The official ominously warns, “We will hit Hezbollah hard while making every effort to limit civilian casualties as much as we can … We do not intend to stand by helplessly in the face of rocket attacks.”

Strategically, now seems like a good time to make good on that threat. Hezbollah is, presumably, spread thinner than it has been in years, with an estimated 6000-8000 troops currently engaged in Syria. Their casualty figures are a closely guarded secret but, according to Yedioth Media, estimates range from 700 to 2000 fighters. If Hezbollah were forced to defend the home front too, one would imagine the fight for the organisation’s very existence would become all the more exacting.

In a televised broadcast on June 5, Nasrallah responded to the comments by the Israeli official in the New York Times article that a war would inevitably result in Lebanese civilians being killed and displaced. He thundered, “If they threaten to displace 1.5 million Lebanese, then the Islamic resistance in Lebanon [Hezbollah] threatens to displace millions of Israelis.”

He also sought to dismiss the idea that Hezbollah wouldn’t be able to fight on two fronts: “If you assume that we are busy in Syria, then you are wrong — because this changes nothing in how we deal with our enemy.”

It’s difficult to know what to make of all this mudslinging or, indeed, if there’s any substance to Israel’s threats. In Counterpunch, Conn Hallinan suggests it should be viewed as part of the broader sectarian war in the region and Israel — having formed a de facto alliance with Saudi Arabia to try to block the Iran nuclear deal — is lending a hand in weakening a significant Shia fighting force.

Militarily, Israel is the greatest threat to Hezbollah, but they also have a kind of symbiotic relationship: the threat of Israeli aggression, in a sense, gives Hezbollah its greatest validation. Its greatest achievements are enshrined in the museum on the old front lines, but if it proves unable to defend southern Lebanon and is reduced to scrapping it out in a sectarian war in Syria, then Hezbollah could well cease to exist in any meaningful way.

No matter what Assad and his regime did the NATO were coming after them. When he succeeded in holding out the armed “activists” the Pentagon created ISIS, Yes, deliberately created ISIS, as admitted in DIA planning documents. Syria is going the ay of Afghanistan, Libya and Iraq, other outstanding examples of NATO nation-building.

Be careful Limited, if you aren’t wearing your tinfoil hat, they can control you.

One notes that Hezbollah (that has overwhelming Shia support in Lebanon, successfully defended Lebanon against the serial war criminal, genocidal Israelis and is fighting against ISIS to defend the secular Assad Government in Syria ), Hamas (that won overwhelming support of Palestinians in the 2006 elections held under Apartheid Israeli guns) and the Kurdistan Worker’s Party (the PKK, that is spearheading Kurdish resistance to ISIS) are also variously proscribed by simple Government fiat as “terrorists” by the Australian Government (see “listed terrorist organizations”; http://www.nationalsecurity.gov.au/Listedterroristorganisations/Pages/default.aspx ).

Yet the Australian Government turns a blind eye to genocidal Israeli state terrorism (even when it was bombing 25,000 Australian citizens in Lebanon in 2006) and indeed de-listed the Zionist Irgun terrorist organization that engaged in genocide and killed Allied servicemen before, during and after WW2. Australia is now engaged in its Seventh Iraq War in 100 years that has seen 9 million Iraqis die from Western-imposed violence or deprivation since 1914 (see Gideon Polya, “Australia’s Seventh Iraq War”, MWC News, 28 February 2015: http://mwcnews.net/focus/analysis/50028-australias-seventh-iraq-war.html ) , and according to the UN is killing civilians in its bombing of Iraqi Sunnis in support of the US-installed Shia Iraqi Government in the Iraq Civil War.

Successive American governments (with knee-jerk US lackey Australian support) claim to be leading a global fight of Western civilization against Muslim extremists but the Awful Truth is that American governments lie and that a pro-One Percenter, religious fundamentalist-dominated, Neocon American and Zionist Imperialist (NAZI)-perverted America has an appalling record of supporting and exciting religious fundamentalist rebels (jihadis) against modern, secular regimes in Muslim countries (Afghanistan, 1978; Iraq, 2003; Libya, 2011; Syria, 2012) with the collateral trashing of democracy, women’s rights, and children’s rights. Indeed jihadis have been important assets for US imperialism (see Gideon Polya, “Fundamentalist America Has Trashed Secular Governance, Modernity, Democracy, Women’s Rights And Children’s Rights In The Muslim World”, Countercurrents, 21 May, 2015: http://www.countercurrents.org/polya210515.htm ).