Shorten watching through fingers -- GoT or Killing Season? ... Bishop ups ante at Midwinter Ball ... and the grannies fight back ...

Anxious viewing for Labor opposition. Tonight will make anxious viewing for the federal opposition, with the ABC’s Killing Season set to spend an entire episode on the circumstances of Rudd’s removal as prime minister. The media release promises that “Gillard’s backers [will] detail how the leadership change was organised” with “disarming candour”. But one Gillard backer, Opposition Leader Bill Shorten, declined to be interviewed for the documentary.

Last episode, the ABC distributed an embargoed video more than a week before it aired. As of this morning it had yet to do so this time — all that’s come out are a few clips of Rudd v Gillard, with no mention of Shorten. Needless to say, the last thing he needs is a reminder of his role as a factional powerbroker in the affair.

Going once, going twice. It’s just one more sleep until the Midwinter Ball, and the charity auctions have been heating up (well, some of them at least), but Foreign Minister Julie Bishop has taken it to the next level. She announced yesterday that her auction experience would no longer just include flights to New York and dinner with Hugh Jackman, Deborra-Lee Furness and Bishop herself. As if it’s not enough to already have the most popular auction item, Bishop has announced that actor Robert De Niro has donated the dinner at his restaurant Nobu. With 48 bids already, the dinner is already up to $25,000 — well and truly ahead of any of the other items. It’s always interesting to see what items get bid on and for how much — both Bishop and Malcolm Turnbull are currently attracting higher bids than dinner with Prime Minister Tony Abbott. But at least Abbott has some bids; so far no one has bid on dinner with Opposition Leader Bill Shorten or Greens Leader Richard di Natale. But there’s still a little over 24 hours to go — heaps of time for punters to dig deep for charities including the Luke Batty Foundation, the Mo, Evie and Otis Maslin Foundation and Rare Cancers Australia.

The Midwinter Ball is famously a time for both politicians and journos to let their hair down in an informal setting, with the speeches from the PM and leader of the opposition off the record. Press gallery president David Speers even reminded journos of this in an email this week — “no cameras, no tweeting, no reporting”. In the past, the Midwinter Ball has sparked some important stories (like when Turnbull threatened Labor staffer Andrew Charlton over the Godwin Grech affair) — maybe the gallery is more restless than usual.

Exclusive watch. It’s been a while since we counted exclusives, but this one from the front page of yesterday’s Daily Tele was pointed out to us because of how non-exclusive it actually was:

The story comes from quotes and figures from the Property Council of Australia — which was also quoted in the Oz and the Fairfax papers. Oops. 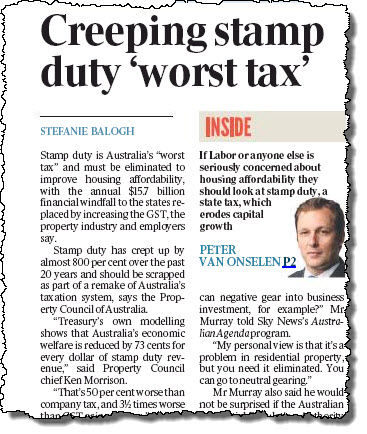 Revolting grannies. Sydneysiders walking past the Uniting Church on Pitt Street today and Thursday at lunchtime will see a group of grandmothers demonstrating against the mandatory detention of children in immigration detention. The women are part of Grandmothers Against Detention of Refugee Children, which has chapters in Melbourne and Sydney. Founder of the Sydney branch Gaby Judd told Crikey this morning “we don’t just sit at home and do the knitting, we want to change things”. The group, which features almost 100 women aged from their 40s to their 80s, believes that their wisdom and experience gives them a particular insight into why children shouldn’t be kept in detention. The grandmothers say they are revolting against the practice, and they are asking government ministers to talk to their own grandmothers about what they would do if their grandchildren were in such situations. While we doubt many ministers still have their grandmothers around to ask, all we can say is viva la purple-rinse revolution.

From the mouths of babes. Another project running for Refugee Week is Kids Talk Refugees, a website that asks both refugee and Australian born children how they feel about asylum seekers and boat people. They have some interesting ideas about where asylum seekers come from: 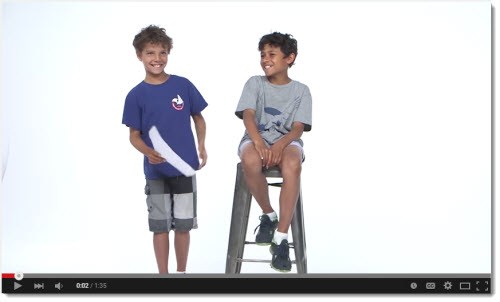 The electorate is lumbered with the most venal and squalid Prime Minister in Australia’s history. But, lots of people think Tony Abbott has done the right thing by paying the ‘people smugglers.’

A government is only as bad as an Opposition allows it to be. With Bill Shorten as leader of the Labor Party we are cursed by an ineffectual and dull little man of zero charisma and limited imagination. Bill Shorten is the best friend of the Liberal party; with him as leader Tony Abbott can look forward to a long career.

VA – a people get the government they deserve – unfortunately you, I and many others cop it as well.
The total inadequacy of Boil Shlornt as Labor ‘leader’ condemns the nation to a 2nd term for what is widely regarded as the worst possible government in the worst of all possible worlds.