We're getting another member of the Crikey bunker. Plus other media stories of the day.

Crikey! A wild journo appears. We’re adding another journalist to the Crikey bunker. Josh Taylor, currently senior journalist for ZDNet, will be joining us in Melbourne come mid-July. He’s been making waves for a few years now with his must-read coverage of technology policy. He’ll be reporting on politics and doing investigations for us — we can’t wait to add him to the team.

What’s business news? Naturally this morning papers business pages concentrated on the creeping takeover of Ten by Lachlan Murdoch’s family company, but there were a couple of other interesting deals yesterday that had a greater dollar value than the piddling $154 million Ten’s fund raising might raise, eventually, if it’s approved. For example, Metcash reported a thumping great loss, as expected, but what was unexpected was the sale of its auto parts business for $275 million to a rival (which has been a suggested method of disposal, but Metcash had been looking to float it on the ASX). And then Arrium, our largest mid-tier iron ore miner and exporter, revealed another round of write-downs of more than $320 million — on top of some $1.5 billion announced in January. Its underlying earnings have plunged to just over a third of last financial’s year’s record $800 million plus, and Arrium is heading for total losses this financial year approaching $1.7 billion or more. And the $1.2 billion Vocus-Amcom merger got up in a first when shareholders voted for it, overturning the supposed blocking stake of 19.9% in Amcom held by rival TPG Telecom. They were bigger, more important stories, and yet the Murdoch shuffling at Ten got most of the attention because there’s nothing the media loves writing about than rival media. Including Crikey (but we regard our reporting of Murdoch’s plays as a corrective to what you might read elsewhere). — Glenn Dyer

Bath out. The continuing erosion of Seven’s TV news audiences, especially in Seven, has claimed a major scalp, with newsreader Chris Bath announcing this morning that she is leaving the network in July. There was no news in this morning’s statement of what she will do.

Bath has been hosting the Sydney 6pm news for Seven on Friday and Saturday nights and hosting Sunday Night. She had been the main 6pm reader from Sunday’s to Thursdays, but was moved sideways at the start of 2014 to allow Mark Ferguson to take the chair. But he has had little impact on Seven’s poor ratings (beaten by Nine last night in Sydney by 100,000 viewers, a real thumping).There was no reason given in this morning’s statement for Bath’s decision.  — Glenn Dyer

More on the Ten deal. As Crikey reported yesterday, Foxtel has announced a $154 million deal for a big chunk of the Ten network.

How that the $154 million to be raised will be used by Ten is also of interest, and was not reported this morning in newspapers. Yesterday’s documents state:

“The proceeds of the capital raisings will be used initially to repay the drawn amount under the existing Commonwealth Bank of Australia (“CBA”) revolving cash advance facility, with any excess funds initially retained as cash. The $200 million CBA facility will continue to be available to fund TEN’s ongoing operations, which will be utilised for working capital, payment of transaction-related expenses, selected investment in content and general corporate purposes. The shareholder guarantees associated with the CBA facility will continue to remain on foot.”

At the end of February (Ten’s end of half year), $105 million had been drawn down from the CBA revolving credit, with $7.3 million in interest and commitment fees capitalised. That will now be repaid. Ten wants to leave the $200 million untouched (that way it only incurs minor fees and not interest) and leave it untouched until it has to be repaid in two and a half year’s time (where it finds the $200 million has been put off till late next year). But more than $15 million in so-called “shareholder guarantor fees’ will continue to be paid to the companies of Lachlan Murdoch, James Packer and Bruce Gordon. Those guarantees were given when Ten negotiated the revolving credit with the CBA back in late 2013 and early 2014. They call for the three companies of the billionaires to repay the loan in exchange for shares in Ten, which would give them control. That is no longer the plan, so as long as the funds are not touched, the guarantees won’t be needed — but Ten will have to over $60 million in fees to the trio. — Glenn Dyer

Video of the day. Julia Gillard offers some advice to Hillary Clinton … 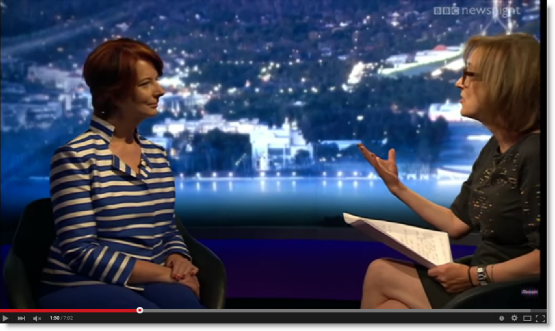