Labor joins the bribery racket — but will the media front up?

With Labor now in the frame for bribing people smugglers, the media has the chance to break the "operational matters" silence exploited by governments of both sides. 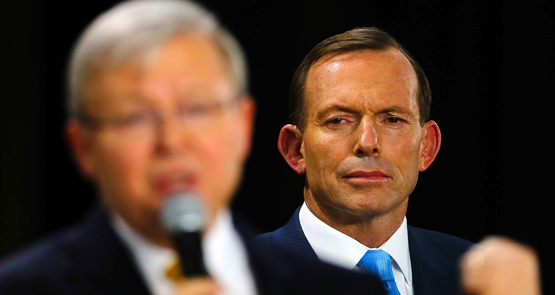 “People smugglers are the vilest form of human life. They trade on the tragedy of others and that’s why they should rot in jail and in my own view, rot in hell.” Prime Minister Kevin Rudd , April 2009

Former prime minister Kevin Rudd had strong views on people smugglers. But apparently they weren’t quite so vile that his government wouldn’t sling them some money for information, or to not run a boat between Indonesia and Australia, according to media reports today.

It was Rudd who first spoke about disrupting the “business model” of people smugglers. But under both Rudd and Julia Gillard, it appears, “disrupting” it included giving them money, which is a peculiar way to disrupt any business model and, as it turned out, fairly unsuccessful.

Labor now has its own questions to answer about bribing people smugglers: how much, when, by whom and for what purpose. It may emerge that there’s a distinction between what Labor did — bribe Indonesian people smugglers for information, or to not put to sea — and what has happened under Operation Sovereign Borders, where people smugglers have been bribed to smuggle asylum seekers back to Indonesia. But, at the moment, there’s nothing to substantiate such a difference. Labor stands condemned like the Coalition, until it explains its actions.

Legally, there’s a significant difference between bribing someone for information or to abandon a people smuggling operation, and bribing people smugglers to smuggle people back to Indonesia — 10 years’ jail, for starters. But in terms of outcomes, there’s not a whole lot of difference. It just extends the process of outsourcing the handling of asylum seekers to other parties in ways that reduce scrutiny and accountability.

The Royal Australian Navy can’t take a boatload of asylum seekers back to Indonesia itself — it has already repeatedly infringed Indonesian sovereignty. If it dumps them in a boat itself, takes them to the edge of Indonesian territorial waters itself and gives them just enough fuel to reach land, it risks the boat foundering and lives being lost. But if you get the people smugglers themselves to do it, if anything goes wrong and it comes to light, you can blame the “vilest form of human life”.

One of the fascinating aspects of the revelation that Labor bribed people smugglers, however, is that it complicates the media’s role on the issue. The mainstream media is, by and large, content to be fobbed off by politicians insisting something is a matter of national security/border protection/terrorism/”operational matters” and therefore they won’t answer any questions about it in Parliament or from journalists. This is why (contrary to the US) there’s been minimal debate about Australia’s involvement with US-led mass surveillance as revealed by Edward Snowden, why ASIS’ illegal spying on East Timor and the government’s efforts to cover it up have been ignored for a year, why the revelations about Australian politicians in the material released through WikiLeaks by Chelsea Manning were never properly discussed.

For an institution like the media that likes to pretend it is a watchdog, checking those in power, it has amounted to complicity with the executive in hiding its actions. Only on Operation Sovereign Borders have a few journalists done all they could to get behind the unjustified secrecy attaching to this “war” on people smugglers (a war in which we bribe the enemy).

Both Immigration Minister Peter Dutton and Foreign Affairs Minister Julie Bishop first insisted there was no bribery of people smugglers, but when Tony Abbott refused to answer, he forced his ministers to alter their responses accordingly, leaving Dutton and Bishop to endure the embarrassment of not being able to repeat their previous answers yesterday in Question Time. Abbott’s refusal to answer appeared to be starting to elicit visible frustration from the press gallery and the wider media. Now, with Labor involved, media hostile to the opposition will be tempted to go after them on the issue. But you can’t pursue Labor on who it bribed and when, and not pursue the Coalition as well.

So, will journalists end their complicity with governments and reject the “operational matters” line? Or will it be another case of “yes, minister”?

I’m starting to feel that this government is on a war footing against the people of Australia.

SANG-FROID: I looked at the Herald Sun today and saw-in the comments section-a large group of people who applaud Tony Abbott’s ‘People Smuggling’ actions. Sure, the Hun carefully tailors comments so they support Rupert Murdoch’s whims. But, I’d love to know what the same people will say now that they know the Labor Party did the same thing? Not that the Murdocracy allows their readers to think.

Australia should treat Indonesia with the same respect that Indonesia gave Australia in the lead-up to the executions of Andrew Chan and Myuran Sukumaran – i.e. ignore them. We could however ask Indonesia for their learned advice on how best to deal with people smugglers given Indonesia’s expertise in harbouring and fostering the people smuggling trade.

I’m starting to feel that this government is on a war footing against the people of Australia.

It’s more than a feeling. With data retention we are all suspects in whatever “war on [pick a slogan]” they choose to wage.

Here’s a question that needs to be answered, who is leaking all this, is their target ASIS? Or do they figure no one will question ASIS?