Voters agree that housing is unaffordable for people in their area, with NSW rated as the worst for housing affordability.

There is agreement across all voting groups that housing where they live is unaffordable and growing increasingly so, today’s Essential Report finds. But the intensity of the view varies across age groups and regions.

Of all voters, 60% believe housing in their area is unaffordable for someone on an average income, while 33% believe it is affordable. Labor and Greens voters feel the same — 68% say unaffordable and 26%/27% affordable. Liberal voters are more divided, 52%-43%. That’s because older voters, who make up much of the Liberal Party base, don’t see any problem with housing affordability, given most of them already own their own homes and benefit from rising house prices. More voters over 55 believe housing in their area is affordable (48%) than unaffordable, whereas those most likely to be trying enter the housing market, under-35s, split 69%-24%, and 35- to 54-year-olds nearly the same, 64%-30%.

Essential also asked its regular question about trust in institutions. The High Court, the ABC and the Reserve Bank remain our most trusted institutions, with all recording increases in trust since January. But all three are less trusted than two newcomers, the Australian Federal Police (despite the AFP’s role in sending  Andrew Chan and Myuran Sukumaran to their deaths) and state police forces, on 68% and 66% respectively. 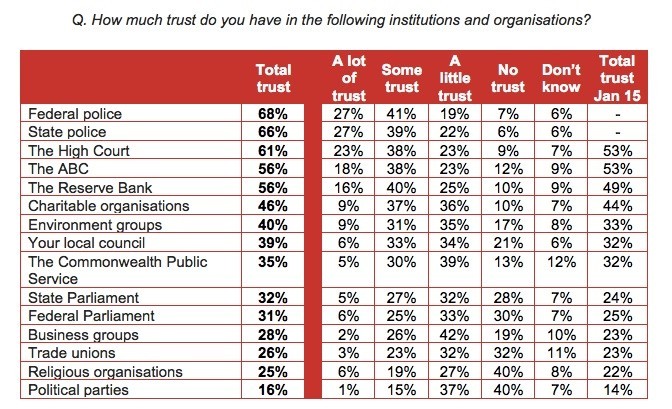 Indeed, this iteration of the question finds voters in a more trusting mood compared to January, with all institutions gaining at least a little more trust, even relatively poorly regarded institutions like business groups, unions and political parties. Labor voters were more likely to trust the ABC (67%), while Coalition voters were more likely to trust state and federal police forces (74% each).

For the first time, Essential also asked about most trusted professions. Doctors scored highest, with 81% of voters having a lot or some trust in doctors; engineers were next, on 68%. Accountants, on 49%, rounded out the trusted professions. Lawyers scored 34%, with 21% saying they had “no trust” in them and 37% saying they had only “a little trust” in them. Bankers scored 29% trust, 25% “no trust” and 41% “little trust”. Journalists scored 27% a lot or some trust, 26% no trust at all and 41% little trust. Real estate agents managed 12% trust and 44% no trust. And at the very bottom, scoring 1% a lot of trust, 10% some trust, 33% little trust and 49% no trust at all, politicians.

Essential must poll the bogans!!!!
Following the debacle over the executions of Andrew and Myuran, how could ANYBODY with half a brain have ANY trust in the Australian Federal Police.
The mind boggles!!!!

CML – it is an opinion poll, with which + $4 one might possibly be able to get a cup of coffee in a major conurbation.