ABC looks on as Snowden smear collapses in on itself

A UK media attempt to claim Edward Snowden has blood on his hands has backfired. But the ABC appears happy to run it anyway. 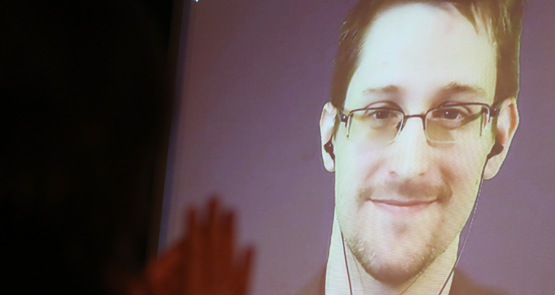 That Sunday Times attack on Edward Snowden we discussed yesterday has continued to implode overnight.

First, after journalist Glenn Greenwald pointed out the numerous discrepancies, internal contradictions and howlers in the story at the Intercept site, the Times — after editing its story to remove one of the howlers spotted by Greenwald, without telling readers — sent a legal letter accusing the Intercept of copyright infringement because it ran a picture of the Times’ front-page headline. Greenwald bluntly told the Times the Intercept wouldn’t be removing the image.

And if that weren’t enough to get a Streisand effect going, one of the authors of the smear, Tom Harper, went on CNN to be interviewed about the story. In the ensuing car wreck interview, Harper, under questioning that could barely be described as rigorous, let alone aggressive, repeatedly admitted he didn’t know key elements of the story beyond what he’d been told by the UK government. The debacle culminated in this immortal exchange:

Interviewer: So essentially you’re reporting what the government is saying, but as far as the evidence, you know, to substantiate it, you’re not really able to comment or to explain that.

Meanwhile, the ABC has its own version of the story on its website, despite PM running a mildly sceptical report on the story yesterday that featured a quote from Greenwald. The ABC version — which has no byline – closely follows the Sunday Times article and even offers its own version of one of the long-standing Snowden myths. Instead of saying Snowden took 1.7 million documents — a number that has no basis in reality given the NSA has said it has no idea how many documents, or which documents, he took — the ABC said Snowden had leaked 1.7 million documents, and even more palpably absurd claim.

An ABC spokesperson told Crikey “while it seems there are factual errors in the original Sunday Times report, we did not repeat them in our story. We do not independently verify every fact contained in the reporting from trusted news agencies.” However, the spokesperson said, the ABC was now updating the story “with information that has since come to light, including reporting on the Sunday Times amending its original story. The existing story will also link to this updated report. We are checking the reference to the ‘leaked 1.7 million documents’, and if it needs to be corrected it will be changed in the original copy and an editor’s note will be added.”

Note: as foreshadowed by its spokesperson, this afternoon, the ABC’s amended and corrected version of the story was posted.

It’s actually worse not to know how many or which documents Snowden took than to know he took 1.7m documents.

Every single document in the west’s intelligence database that Snowden had clearance to see has been compromised.

As I understand it the USA’s contempt for Snowden was due to his revelation they were carrying out massive furtive surveillance & data retention. Not because he had x million unleaked documents.

What would be more interesting is how many of those docs reveal law breaking by ‘law enforcement’.

Nevertheless, the messenger is always the first to be shot…

So news agencies remain “trusted” for as long as you don’t check their facts/regurgitant, which becomes yours?
Courageous.

OneHand – ‘it’s actually worse…‘ – I didn’t realise that you were on a retainer from Langley VA as well as mudorc.
Surely the whole point of Snowden/Assange/Manning et al (not forgetting our Customs report of Sydney airport)is that they demonstrate that the authorities are (a) incompetent at best, (b)corrupt or, tin-foil on standby, (c)they are actually beholden to other than their citizens?
Perish the thought!