The senator who used to be a cleaner ... AWU members desert union ... and Bush logo is surprisingly bad ...

Hockey taken to the cleaners. As pollies, staffers and journos arrived at Parliament House early this morning, they could be forgiven at taking a second look at the site of Senator Glenn Lazarus holding aloft a giant gold toilet brush on the lawn out the front. 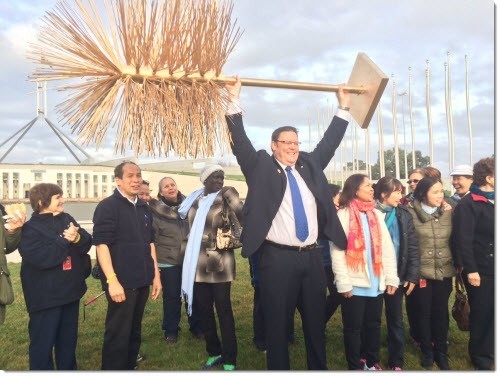 It’s quite the image, and it formed part of the protest by Parliament House cleaners, who are taking part in a 24-hour strike today as part of a push to raise their wages, which cleaners’ union United Voice says have been cut by an average of $6837 a year. The giant Golden Toilet Brush is an award bestowed by the union, described as the “uncoveted and ignoble gong of shame … bestowed by cleaners on the person, company or organisation that has done least to promote the well-being of cleaners in the previous year”. Lazarus wasn’t the recipient of the award; that honour went to Treasurer Joe Hockey, who wasn’t on hand to receive the gong. United Voice National President Jo-anne Schofield said: “United Voice hopes that this Golden Toilet Brush will help Mr Hockey and flush some of his recent problems away.”

We hear Lazarus was one of the stars of the breakfast demonstration, which also marked the 25th International Cleaners’ Day, leading a “we want Joe” chant and sharing stories of his own experience as a cleaner. Lazarus worked as a cleaner for four or five years in his early career with the Canberra Raiders, getting up early before training to work for the local council. His father was also a cleaner. A number of MPs from the ALP, the Greens and the crossbench attended the breakfast, but no Coalition MPs turned up. Parliamentarians are unlikely to notice too much disruption during the strike, with an email last week warning that “the normal second emptying of bins may not occur in all areas on Monday”.

The Golden Toilet Brush still hasn’t been claimed, and is sitting looking lonely on the Parliament House lawns. 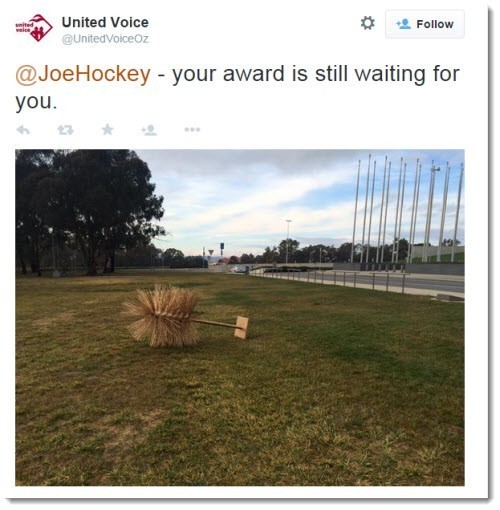 AWU scandals taking their toll. Opposition Leader Bill Shorten said over the weekend he would not speak about the allegations made against him at the Royal Commission into Trade Union Governance and Corruption until he sat in the witness box himself. He won’t face the commission until late August or early September, but we hear from a tipster that the Australian Workers’ Union and Shorten are already sweating on the fallout from the allegations that a Melbourne construction company paid $38,000 for union memberships for its employees:

“The Victorian AWU union membership is in crisis with the AWU losing 8000 members in just two years in the midst of the engulfing scandal surrounding former state secretaries Bill Shorten and Cesar Melhem. According to the AWU financial reports, union membership in Victoria was at 28,852 members in 2012 and is down to just 20,051, representing a loss of nearly a third of its members. This is before allegations of inflated memberships and inaccurate membership lists were presented to the Royal Commission into Trade Unions and threatens to further reduce the AWU’s power in Victoria. This sparks serious concerns for Shorten who relies significantly on the AWU base within the Victorian division of the Labor Party. With closures of Alcoa affecting the AWU memberships even further in the last year — one can only imagine what their true union membership will be once the 2015 Financial Report is released.”

Air force flying the coop? We hear from a tipster that there’s a big shake up on the cards for RAAF staff based in Victoria:

“The Air Force is about to announce a $148 million dollar upgrade of RAAF Point Cook and move its Laverton workforce there. Massive win for Wyndham, jobs for constructions, jobs at Laverton saved (they would have gone to Canberra or the CBD if Laverton closed under the latest review), less traffic on point cook road as the 1000+ staff at Laverton almost all work in Point Cook. Potential to move CBD jobs out there is well taking even more pressure off the Werribee line since many CBD staff for Defence live in Point Cook and the locality. There is a risk though as some of the senior leadership wants to work in Canberra to be nearer their chances for promotion.”

We understand the move has been announced to staff via email. We asked Defence media about the move, but didn’t hear back by deadline.

Bush v Clinton. While it seems that US presidential candidates are playing catch up with Democratic hopeful Hillary Clinton, Republican candidate Jeb Bush has managed to overtake Clinton in at least one area — coming up with a terrible logo. Bush tweeted the logo yesterday, which paints his name as an exclamation. We imagine that “Jeb!” could be the swearword of the future, something to yell after knocking ones shin on a coffee table.

Dad jokes ahoy. This video was posted on Channel Ten’s Facebook page this morning to promote tonight’s episode of “Have You Been Paying Attention?”. While the contestants joke about Caitlyn Jenner’s recent gender transition, host Tom Gleisner says “get them out of your system”. Perhaps that should have happened before they ended up on air, because it felt like an awkward family gathering with creepy dad jokes (and attitudes) from the ’80s. 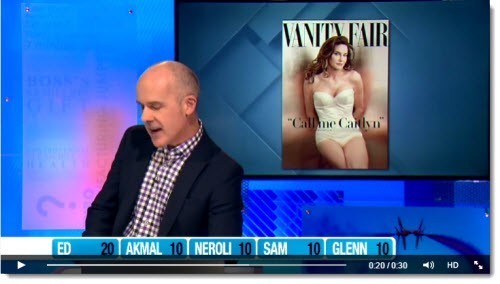