Buzzfeed Australia rehashes the ABC's defamation. And other media tidbits of the day.

How’d that get here? For four hours on Friday BuzzFeed Australia had a community post feature the photoshopped image of Chris Kenny with a dog that got the Chaser into so much trouble a few years back. The post, titled “27 times Australian Journalism Was The Realest”, originally featured the offending image, for which Kenny successfully sued for defamation, at number 12, but after an SMH journalist pointed out that was risky on Twitter, it was changed to a photo of The Chaser boys.

The post wasn’t made by a BuzzFeed staffer but was part of BuzzFeed’s “Community Post” initiative, which allows those who set up an account to create articles that feature on BuzzFeed. Crikey understands community posts on BuzzFeed aren’t approved before publication, but they tend to be edited, particularly for copyright concerns, if they become “featured” on the website.

BuzzFeed Australia editor Simon Crerar explained how this works. “Everything we promote on BuzzFeed, whether on social media or our website, is vetted and edited by our team.

“We do have a vibrant, exciting community who create posts that go live before we publish. But if we want to promote one of those, it has to be vetted by our community posts team in New York.”

The post with the Chris Kenny photo wasn’t a post actively promoted by BuzzFeed, but it was hosted on the BuzzFeed website. Users who create community posts asked to abide by a comprehensive user agreement that holds the creator individually responsible for any content they post. It states:

It’s unlikely this would hold up in Australian court. People tend to sue publications, rather than individual journalists, after all — whoever has the deepest pockets. — Myriam Robin

Medical fraternity’s revenge. In the period after the ABC’s Catalyst program aired a two-part program on the use of statin medications to combat heart disease, 61,000 people reduced or halted their intake of the anti-cholesterol drugs, a study published in the peer-reviewed Medical Journal of Australia today found.

The study looked at a sample of 10% of those on the Pharmaceutical Benefits Scheme and found statistically significant increases in the number of patients discontinuing or lowering their statin use.  “Up until 30 June 2014, there were 504,180 fewer dispensings of statins, and we estimate this to have affected 60,897 people,” the study concluded.  The study noted that trends in statin use were largely stable until the airing of the program, although, the authors conceded, “we cannot rule out other factors affecting dispensing behaviour during this study period”.

It’s not the first medical study to look at the impact of media reports on prescription trends. When Kylie Minogue spoke publicly about her breast cancer diagnosis in 2005, the number of women aged 40 to 69 booking in for their first mammogram doubled, for example.

The Catalyst program in question was highly contentious — it went against the mainstream medical advice patients are given to combat high cholesterol. It was criticised by the ABC’s Media Watch, and later, an ABC investigation found the second episode gave undue emphasis to critics of statin usage. — Myriam Robin

Ilic sacked. Australian funnyman Dan Ilic has lost his job as Al Jazeera’s “senior satire producer” after using the Al Jazeera studios and his studio editors to record an audition for The Daily Show, which was looking for a new correspondent. He spoke to Pedestrian, saying he didn’t think using the studio was such a big deal:

“Thousands of hours of editing time gets billed to the company while presenters work on their showreels.

“If I’ve learnt anything during my time at Al Jazeera it’s that journalism is not a crime, unless you’re a BBC journalist exposing the deaths of migrant workers during the construction of football stadiums in Doha…or you use the studio and make up for 40 minutes”

Fair Work to decide. Fairfax’s plans to cut photography staff at the Illawarra Mercury continue to drag on, with a Fair Work hearing scheduled for this Wednesday.

As part of the NewsNow model being rolled out at Fairfax regional publications nationally, journalists are largely expected to take their own photos. But the Illawarra Mercury, along with the Newcastle Herald, operates under the metropolitan EBA, a clause of which states that if a role is made redundant, its functions cannot then be given to another role to execute. Journalists can’t replace photographers, in other words.

“Union members believe Fairfax is in breach of that EBA clause,” the national lead organiser for media at the MEAA told Crikey this morning. “No one is under any illusions about how difficult the publishing environment is. However, the Mercury has for 160 years served as the paper of record for the Illawarra community. What these cuts that the company is proposing will do is severely curtail the Mercury’s ability to do that. ”

Fairfax is today scheduled to have a phone hook-up with regional staff to answer further questions on the NewsNow rollout. — Myriam Robin

News Corp’s split, two years on. We are two weeks shy of the second anniversary (June 28) of the great split in the Murdoch empire, and we can report that the news isn’t good. News Corp’s share price is heading for a loss since June 28, 2013, and while 21st Century Fox’s shares have added value as intended, that gain is an illusion because Fox has spent 2015 being overtaken by its peers and newcomers and is very quickly becoming a smaller media force globally.

The relative sharemarket performances for the two companies since the big split at the end of June 2013 tells the story. That split was made to free the content- and video-rich Fox from the dead weight of the newspaper-dominated News Corp (which actually depends on the performance of REA Group for much of its market value, not its newspapers in Australia, the UK and US).

But compared to Fox, News Corp shares have faded in the two years since the split are actually are lower over the two years. News shares ended at US$14.18 on Friday night in the US, and touched their low for the past year of US$14.07. That is down 90 cents from the US$15.08 on July 1, 2013, the first day the two companies traded separately on Wall Street. — Glenn Dyer

Front page of the day. The New York Times Magazine examines Scott Walker’s campaign against Wisconsin’s unions, and whether it can be rolled out nationally. 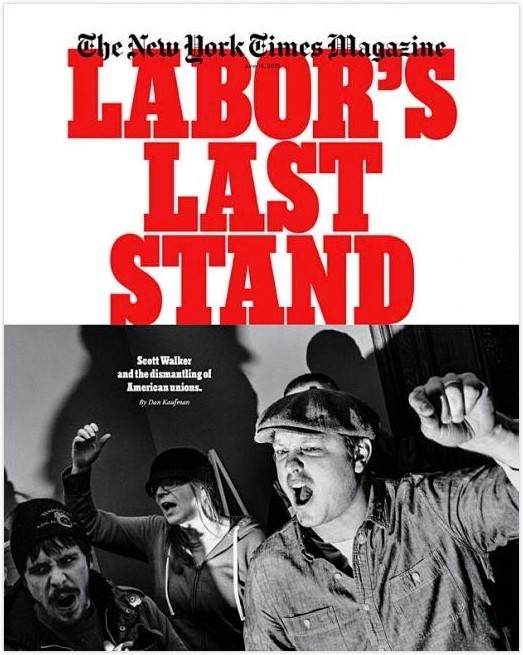 When Dan Ilic was busy lecturing us about copyright law a year or so ago he didn’t seem to have a problem with people who appropriate other people’s copyright material without paying, so why wouldn’t he think it was fair to use his employer’s resources to audition for another network? After all, it’s all “fair use” in his world, isn’t it?

“trends in statin use were largely stable until the airing of the program, ”

I had blood in the urine a couple of days after starting a well-known statin.

When I reported that to my doctor it turned out that he had no idea that kidney failure was a known side effect.