The truth of that new MH370 ‘revelation’

Yesterday's news purporting to explain the reason why MH370 didn't leave any debris when it crashed into the Indian Ocean was based on ignorant assumptions.

Somehow, a group of mathematicians has managed to come up with a claim that MH370 dived head first into the south Indian Ocean and remained intact.

Their ignorance of the structural strengths and weaknesses of airliners and the evidence available from similar impacts is as shocking as the lack of editorial depth in papers that publish such rubbish.

When the mass of a jet airliner makes a high-velocity impact with a body of water, the structural integrity of the windscreen visors and the thin cylinder of the pressure vessel that is the cabin structure is ruptured and totally destroyed.

This is true both internally and externally. Water is rammed up through the cabin toward the tail, and the walls have already been compressed and broken. Any passengers still alive are killed within a split second.

The hideous damage inflicted during crashes into water mimic very closely those of impacts with the ground or buildings. Examples include the December 2014 AirAsia crash in the Java Sea, the belly-flop damage sustained by Air France flight AF447 in 2009, and the Silkair mass murder and suicide flight into the Musi River estuary near Palembang in Indonesia in 1997.

The deceleration measured by the flight data recorder in the Air France crash into the mid-Atlantic peaked at more than 32 g of force. Some bodies found floating on the surface had been cut in two by their seat belts.

Silkair was definitely a vertical dive. As the photo shown below indicates, the jet was torn to pieces. 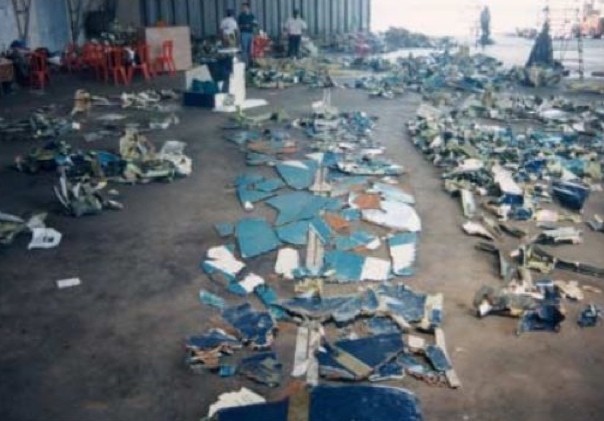 That 737 required the pilot to have been in active control of the jet until impact, as jets do not “naturally” enter into or follow a sustained dive when fuel runs out. Rather, they execute a series of abruptly variable arcing descents, or a spiral, until impact, which is what the official inquiries into MH370 believe is shown to have occurred during the last aircraft-initiated “ping” to an Inmarsat satellite, when was incomplete when it suddenly stopped, apparently on contact with the water.

(There was a subsequent attempt by the satellite to reconnect with the aircraft, to which there was no response.)

The learned mathematicians story seeks to answer why no floating debris was found. Therein may be a real story. About a week after MH370 vanished on March 8, 2014, on its way from Kuala Lumpur to Beijing with 239 people on board, satellite image scrutiny began to find what looked like a floating debris field south-west of Perth.

The haste with which the Australian-managed aerial search shifted its geographic focus remains either a matter of a complete bungle, or something more sinister; keeping in mind it took, and continues to take, direction from the Malaysian authorities, who were later found to have lied unashamedly about what they knew about MH370 from the moment the public became aware the flight was missing.

The unwillingness of Australia to query the direction and integrity and information it received from Kuala Lumpur in relation to MH370 is a very big festering issue, as often reported in Crikey aviation blog Plane Talking, yet ignored by the same media that report the sort of clap trap found in this piece of editorial garbage.

There are hard stories to do about MH370, and easy ones, like the one being peddled as click bait in today’s papers.