The next generation of Murdochs takes the reins, and other media tidbits of the day.

Junket watch. Here at Crikey we’ve been keeping an eye on media junkets, particularly as used in news reporting, so thanks to Andrew Bolt for drawing another one to our attention.

As he notes, the French government paid to have “warmist” SMH environment editor Peter Hannam (Bolt’s words, not ours) attend the Paris 2015 conference.

“Peter Hannam is in France as a guest of the French government,” Hannam’s articles, several of which have conveyed criticism of Australia’s climate change stance, from the conference note at the bottom.

“The Sydney Morning Herald is outraged when a think-tank pays a sceptic yet happily accepts cash for a warmist,” Bolt wrote yesterday. But Hannam isn’t the only one to attend the conference courtesy of the French government. The Australian’s national affairs editor Sid Maher is also in Paris, also courtesy of the French government. His article today makes that clear. — Myriam Robin

The Murdoch clan plays musical chairs. In these days of streaming video, Netflix, Facebook, other mobile media services and Apple, it certainly no longer pays to have an 84-year-old newspaper addict running the modern media company — especially in the US and especially when it’s 21st Century Fox. So, in one big way, the news overnight from Camp Murdoch of a changing of the guard at the top of 21st Century Fox represents an admission that its management is out of date and needs refreshing.

In fact, 21st Century Fox definitely needs new, “younger blood”, and it is getting it in the form of son Lachlan being pushed up to co-executive chair, from being a non-executive co-chair, as brother James rises from sharing the chief operating officer role with Chase Carey to taking the gig of CEO and flying solo.

And such a change is needed judging by Fox’s sharemarket performance this year.

While Wall Street is up a tiny amount for the year so far (more for the Nasdaq index and its collection of techy stocks), Fox shares have lagged and at the close this morning in New York, are down 14.3% since January. Fox has lost value because of weaker earnings, especially in its Fox free-to-air TV business, where revenue is disappearing and costs rising because of a combination of problems. Concerns are being raised about whether management was up to the challenges coming from Netflix and the plethora of rival streaming services, and the looming battle between Facebook and Apple, which will crush even smaller (relatively speaking) players like Fox. Fox management and board — from Rupert down to James and Lachie, Chase Carey and even at stablemate News Corp — have been blindsided by the rise in streaming video, Facebook (and not Google, the traditional new media rival).

The decision of Chase Carey to step aside and become an “adviser” to the company, rather than continue sharing the chief operational role with James, is an indictment. Carey has a clause in his contract that, if triggered by the end of June, will allow him to depart at the end of 2015. Now the Murdoch family will have to run Fox (the board doesn’t matter). The company will sink or swim on the ability of the sons and the fading old man. You can imagine the glee at Facebook, Apple and even Google. — Glenn Dyer

Farewell mX. After the sudden announcement two weeks ago, today is goodbye. If you happen to catch a train in Sydney, Melbourne or Brisbane this afternoon, you might want to pick up the last ever issue of mX, which should be out after 2pm or so today. 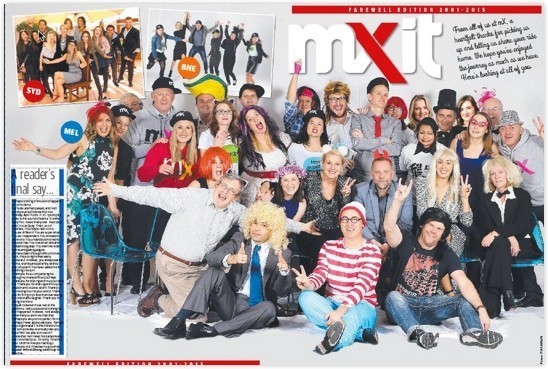 The full issue won’t be out until after Crikey publishes (though a preview of the cover has been tweeted — above). We’ll have to instead mark the occasion with the best we could find in yesterday’s issue. Luckily the letters page delivers. A reader yesterday asked: “After all these years, never have I ever questioned what mX stood for. Is it an acronym, or is it simply just mX?”

The editors note in response: “After so many vents on this, mX has always stood for people who are old, disabled or pregnant on public transport.”

So there you have it. Or not.

The free commuter newspaper owes its existence to the runaway success of Metro in Denmark in the late 1990s. Back then, commuter papers were all the rage, so Fairfax considered launching one in the lead-up to the Sydney Olympics, partly to keep Metro out of Australia, and partly to compete with News Corp, which at that point had afternoon editions of its Sydney and Melbourne tabloids. Fairfax registered the Sydney Express and Melbourne Express names, but decided not to proceed, as News Corp threatened an all-out newspaper war if it went ahead. So the plan was shelved for a year, until Fairfax began plans to launch a Melbourne edition, helmed by now Age editor-in-chief Andrew Holden. So News Corp did the same. Newspaper mX, helmed by Phil Gardner (who would go on to head the Herald & Weekly Times until he took a redundancy in 2013), launched on the same day as the Melbourne Express in early 2011. The Express was a morning paper, mX came out in the afternoons. But mX creamed the competition from the start. Better designed, in colour, with a noticeably younger target demographic and a greater focus on entertainment news, it took only six months to defeat the Melbourne Express, which shut down on September 1, 2001, with just a day’s notice. The News Corp paper also benefited from an exclusive agreement with the Victorian government to distribute papers inside train stations — the Express was distributed outside the boom gates.

Fairfax had registered the Melbourne Express name in 2000, which led many to assume mX was trying to confuse readers by calling itself an acronym of that. But News Corp never came out and directly addressed the claim.

After the Melbourne Express’ demise, News Corp expanded mX to Sydney and Brisbane. It lasted nearly 15 years longer than its rival. — Myriam Robin

Reclaiming Mx. Over at Fully (Sic) (Crikey’s language blog), Allie Severin ponders one good thing to come out of the closure — maybe Australia will now finally embrace the gender-neutral Mx pronoun on official forms, which has been tricky here because of the paper by the name.

No lost photos here. Fairfax’s photographic history is in safe hands, the publisher has asserted, after a series of reports charted the bankruptcy of the American firm Fairfax had commissioned to digitise its images.

Earlier this week, ABC News’ American Correspondent Lisa Miller wrote a detailed piece on Rogers Photo Archive, the company Fairfax had sent photos to, which has had its assets seized and premises raided after allegations of sports memorabilia fraud. “Fairfax’s photo archive has been left in limbo — part of a court battle involving at least a dozen different people and organisations,” the ABC reported.

But Fairfax has hit back at suggestions its photos are in danger, with Chris Berry, the director of information services at Fairfax, writing in a piece on the SMH website that the company sent either negatives or photos to America, meaning it has at least one copy of the photos still in its possession in almost all cases.

“Fairfax Media has taken steps to assert its ownership of this material and has been examining the prospects of completing the digitisation work,” Berry wrote. “Through negotiations with the receiver, the digitisation work on these collections has been found to be well advanced. Fairfax Media has already received about  600,000 scanned photos of the Sydney collection.”

As to whether the photos in America are in danger, Berry wrote that Fairfax has inspected the storage facility where they are being stored: “They were found to be well housed in secure and climate-controlled storage.” — Myriam Robin

WSJ consolidates editions. Buried under the news of the changes at the top of 21st Century Fox was a major costing move at the Wall Street Journal overnight. It will launch in September a full-colour broadsheet in financial capitals in Europe and Asia to replace the current compact, or tabloid editions.

What News Corp management is effectively doing is ending the two distinct regional editions in Asia and Europe and matching the rival Financial Times in look and content. The FT is a compact broadsheet, and The Wall Street Journal will have a similar size and be produced in New York.

“The new, full-color, broadsheet editions will be available Monday through Friday and will replace the current compact newspapers in Europe and Asia. The editions will launch in mid-September, targeting key financial capital cities, such as London, Frankfurt, Hong Kong, Paris and Shanghai,” the statement from the Dow Jones Co warbled.

The Journal ran a retrenchment campaign through contract buyouts of older reporters and editors last month. This change is a major cost-cutting effort whose impact will only become known around September when reports of job cuts will emerge from the European and Asian editions. — Glenn Dyer

Front page of the day. Bloomberg Businessweek’s code issue. You can read the cover piece here, but don’t try to skim. We tried — the piece is self-aware. 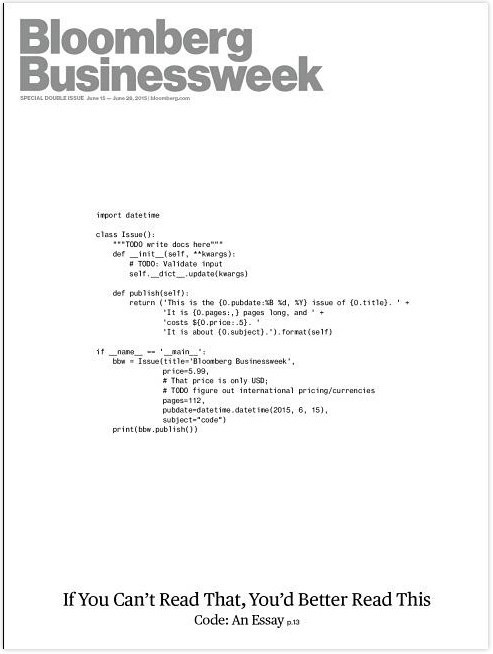