Why hasn't Julie Bishop joined Malcolm Turnbull and mounted a leadership challenge against Tony Abbott? She would nail it. 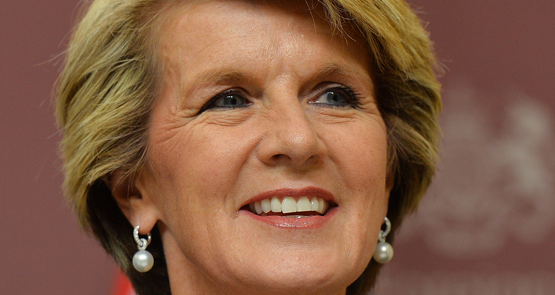 In a week where the level of political discourse seemed to have sunk to even more frightening lows, it was a relief to find a senior politician who looked and sounded like a grown-up.

As her colleagues descend into a gang of bullying schoolboys, Julie Bishop presents as an alternative prime minister. Delivering her address to the Lowy Institute in Sydney yesterday, the Foreign Minister looked like the sort of stateswoman we could happily send off to the G20 without getting anyone offside or causing embarrassing international incidents.

Like most good politicians, male and female, she combines calm competence with personal charm. After her address, already late for her next appointment, she took the time to have a 10-minute private conversation with Peter Greste, the Australian journalist previously jailed in Egypt, for whose freedom she had campaigned long and hard. She said in her speech, and to Greste personally, that the mooted government policy of depriving dual nationals of their citizenship if they are engaged in terrorism would not apply to him. Greste, who has dual citizenship, spent 400 days in jail after being convicted on flawed terrorism charges.

According to a leak from the cabinet room, Bishop was one of the members who opposed extending that power to revoking the citizenship of sole nationals, effectively rendering them stateless. Yesterday, she told Lowy Institute audience that she already had the power to revoke the passport of a person who is deemed to be a risk to national security. That power is exercised only on the specific advice of intelligence agencies, she says.

Asked about the Paris Climate Conference at the end of this year, the Foreign Minister said she and the Environment Minister Greg Hunt would be announcing new targets by the middle of this year. In addition, Australia would play an appropriate role in ensuring an “international buy-in” on the issue of reducing greenhouse gas emissions, she said. On a day when the Prime Minister, in an interview with broadcaster Alan Jones, had displayed the same venom towards wind farms that he normally reserves for the Islamic State, these words were reassuring. Polls have repeatedly shown that, on the topic of climate change, the Australian public wants sensible leadership, not rabid pandering to shock jocks.

And at least we now know where controversial Danish climate sceptic Bjorn Lomborg has got to. Spurned by Australian universities, which cruelly rejected a $4 million incentive to house his climate institute, he has now popped up in a new vehicle within the Department of Foreign Affairs and Trade, called the “innovationXchange”. This lower-case group “has been charged with finding and delivering innovative solutions to some of our region’s aid and more intractable development challenges,” Bishop said.

Its work is guided by an “International Reference Group”, which includes former New York mayor Michael Bloomberg, a UN climate change envoy, and Lomborg, among others — those meetings should be very interesting. Australian members include Sam Mostyn, the president of the Australian Council for International Development, Seven Group Holdings chairman Ryan Stokes and start-up investor Annie Parker.

But it’s not all hard and soft power inside the hallowed halls of DFAT. Recently, Bishop said, in what must be a much tinier version of China’s panda diplomacy, we loaned four koalas to the Singapore Zoo to celebrate the 50th anniversary of Singapore’s independence. Qantas flew the koalas up to their new home in first class (free of charge) and has agreed to take up eucalyptus branches every week until they return. As they are already effectively locked up, at least we don’t have to worry about them being jailed.

It’s to Bishop’s credit that she can make a story even as small as this one sound entertaining. Clever, diligent, effective — why hasn’t she joined  Malcolm Turnbull and mounted a challenge? Is there an emoji for that?

When, oh when, will the media puhleaze stop distracting us with all this fluff and FOCUS on the absolutely disgraceful governance we are experiencing???

Bishop is a part of Team Australia….she shares a collective blame for the circus we are seeing.

Both her and Malcolm Turnbull cannot be allowed to wash their hands of the behaviour of their cabinet.

I guess there’s no real need to mount a challenge because they’ll win the next election with TA.
Reason being, there’s no effective Opposition party.
The Opposition have to wake up and start making an effort. Come on Labor, start giving them a run for their money, or we’ll have another 3 yeas of TA and Co.

Since her visit to Tehran, Julie has been warming to her Iranian colleagues with decided vehemence against all things Sunni and surprisingly re-upped the discredited acronym WMD. After her UN exploits – ironically on the back of abusing Rudd for getting the gig – she seems energised by her global visibility, which is understandable considering the miserable provincial smearing and jeering in Canberra. Any détente with Iran would certainly peeve friends of Israel but, for mine, it makes good sense to spread the diplomatic love, as the nature of alliances in that region are beyond fluid. Witness the toxic relationship between ISIS and Al Qaeda – the enemy of your enemy might just be worth talking to.

“Maggie Thatcher II”.
Turnbull and Bishop are parties to this malaise.