Tony Abbott has taken a stand against tall towers that cause all kinds of health problems. But the towers in question are mobile phone towers, and it's 1995. Ketan Joshi explains.

Yesterday, Prime Minister Tony Abbott declared that wind farms were “visually awful” and that he was concerned about their health impacts. He followed up these assertions with a surprisingly frank admission to shock jock Alan Jones: “What we did recently in the Senate was reduce, Alan, reduce, capital R E D U C E, we reduce the number of these things that we are going to get in the future. Now, I would frankly have liked to reduce the number a lot more.”

Abbott has always been a bit afraid of the made-up health impacts of tall towers. This footage of Abbott in 1995 is telling; he is speaking to a community fearing the health impacts of a mobile phone tower in Harbord (now Freshwater, in Sydney). 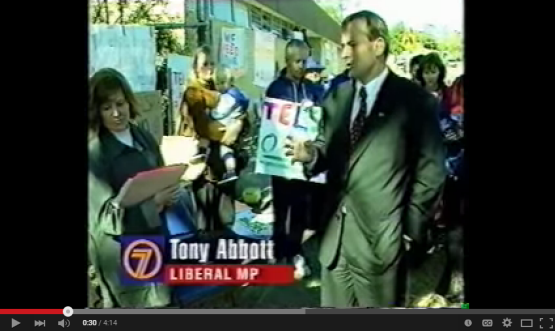 He even uses the phrase “these things” to describe the mobile phone tower, a phrase he’s consistently used to describe wind turbines when sitting opposite Jones. Characterising inert machines as unspeakable monstrosities is a key component in raising unfounded health fears.

There’s no evidence to suggest wind farms harm human health (and as the 1995 news bulletin makes clear, there is also no evidence to suggest phone towers make you sick, either). In fact, the theory itself is riddled with  contradictions and inconsistencies. No fewer than 25 separate reviews, some published and others conducted by government agencies (such as the National Health and Medical Research Council), all failed to find any scientific evidence that wind farms are harmful.

A $2.1 million study in Canada examined a range of turbines at differing distances from several thousand different participating households. The study found no evidence of health impacts from the wind turbines (it did find that those benefiting from the wind farm were significantly less annoyed by audible noise).

Media warnings about the adverse health impacts of technology can also directly result in reports of ill health. A fascinating study by Witthoeft and Rubin used a shambolic BBC Panorama “investigation” into the “dangers of wi-fi” to prime participants and, along with a control group primed with actual science, exposed them to real and fake wi-fi signals. Regardless of exposure, the group primed with misinformation reported significantly more symptoms than the group primed with scientific information.

Precisely the same effect occurs with wind farm misinformation and infrasound. Fiona Crichton from the University of Auckland found that telling healthy subjects that wind farm infrasound would make them sick resulted in a statistically significant increase in symptom reporting. Abbott’s wind farm comments led to a range of headlines warning people who live near wind farms that they should feel fear and anxiety.

There are some heartbreaking instances of the power of belief. A woman living near a proposed NBN tower in Dereel wraps a flimsy piece of tinfoil around her head to protect from electromagnetic radiation in this video. The misinformed continue to suffer, but the misinformers escape without consequence.

The open admission of efforts to R E D U C E the size of an Australian industry competing with coal-fired power is jarring, and it’s clear that these efforts are behind the declaration that people living near wind turbines ought to feel fear, consternation and anxiety, despite there being no evidence for this. Whether this helps in efforts to kill off coal’s competition is an open question, but we know that people are likely to suffer as a result.

Tony Abbott, when he was health minister, opposed scientific research on embryonic stem cells on the grounds that we can’t predict the results or whether they’d be useful.

Exactly the reasons why science is done.

Another example of the PM agreeing with whoever he’s talking to.

He stands for nothing.

I think that wind towers I are elegant.

Or is he to be given yet another free pass for being dishonest. It would seem that he has reached such a level of dishonesty that it is accepted as normal and no longer merits comment and approbation. This is why politics in Australia are so toxic

Then again, Pav, Tony also told us before the election that he could not be taken at his word. He was very emphatic about this. Why is everyone so surprised with what has followed?