Soon to be divorced Jensen off ACL site ... Ms Tips living on the street ... and the best way to react to a legal threat ...

Cleansing one’s site, if not one’s soul. It takes a special kind of embarrassment to make the Australian Christian Lobby want to distance itself from you on same-sex marriage. In a rare score for the Canberra City News yesterday, Nick Jensen, a Christian living in our godless, people’s republic — and an employee of the ACL — made national headlines when he wrote a piece saying he and his wife, Sarah, would divorce if same-sex marriage were allowed. Why? Good question (you can read Jensen’s rambling and borderline nuts argument here, if the overwhelmed City News servers deliver the article, or it’s been picked up elsewhere), but it was something about Welsh broomsticks and governments not having sovereignty over words. Within a few hours, the ACL had removed Jensen from the list of staff on its website  — a change spotted by Brisbane artist Paul Webster. Alas for the ACL, Google cache, every bit as much as God, sees everything that you do online. All we can say to ACL boss Lyle Shelton is: Lyle, hate the sin, love the sinner, and restore Nick to your website. 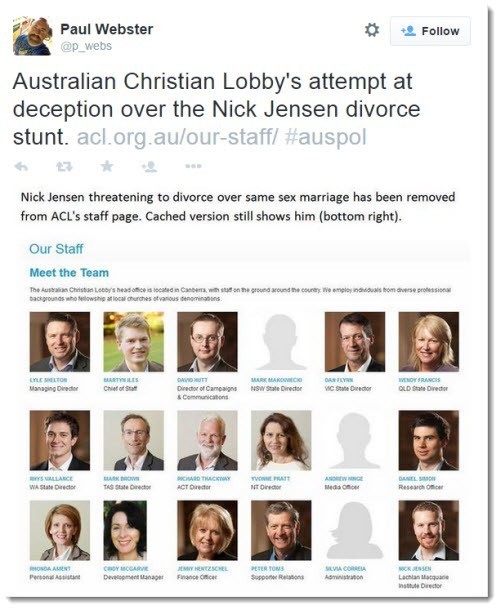 Whose polling? A tipster tells us there is telephone polling going on in marginal seats in Queensland and NSW asking punters how they feel about the tax deduction status of environmental groups. A parliamentary inquiry into whether environmental groups are using money donated to them to run campaigns that go beyond protecting the environment will hold hearings on the issue next week, and our tipster thought the polls might have been commissioned by the Queensland Resources Council, which had already made a submission to the inquiry. Queensland Resources Council chief executive Michael Roche told us today that it wasn’t the QRC: “QRC has not commissioned any such polling, nor does it have any plans to do so.” So who is running polling? If you know, you can fill us in here.

Ms Tips buys a house (not quite). Yesterday we searched Seek for “good job good money” to take Treasurer Joe Hockey’s recommended first step to being able to afford a house. Looking at the money available from said “good job”, we did some number crunching to see if that really would get a foot in the door to buy a house in Sydney. Assuming the “good job” pays $70,000 a year — a figure near the top end of Seek’s good money-earning scale, after tax, Ms Tips would be left with $55,703 a year, or $1071.21 per week to live off. If we pay the average $520 a week for house rental in Sydney, plus $50 for utility bills, $15 for internet, $8 for phone and $100 for food, that leaves $378.71 per week for saving and general spending. If we save half of that amount ($189.35) for a 10% deposit on an average $914,506 Sydney home, it would take 482 weeks. Even if Ms Tips saved all of her weekly $378.71 budget, it would take her over four and a half years to save for the deposit and she STILL wouldn’t be able to afford the mortgage. If Ms Tips were able to get a mortgage with an interest rate of 4.99%% over a 30-year loan, she would have to pay $1,018 per week — far more than her good job budget can allow.

Even with a good job that pays good money, it looks like Ms Tips is still on the outside of a house looking in.

Key’s no fool. New Zealand Prime Minister John Key has said he throws out his mobile phone every three months and never takes one into national security meetings. “If I was having a conversation with my national security advisers … I would never have a mobile phone in the room I’m in, because you can use it as a listening device.” We know that Malcolm Turnbull uses Wickr to message his friends securely — we wonder if any Aussie pollies are using security measures like Key.

Lactose intolerant. We read today that the A2 Milk company has issued a court writ claiming the ABC’s consumer TV program The Checkout engaged in “deceptive and misleading conduct” in a segment that described the company’s scientific claims as  “bogus”. To which the The Checkout’s executive producer, Julian Morrow, responded: “Even just hearing about the legal action gives me a feeling of discomfort in my tummy, and I can’t say if drinking A2 Milk would help with that at all.”

We act for Mr Arkell who is Retail Credit Manager of Granada TV Rental Ltd. His attention has been drawn to an article appearing in the issue of Private Eye dated 9th April 1971 on page 4. The statements made about Mr Arkell are entirely untrue and clearly highly defamatory. We are therefore instructed to require from you immediately your proposals for dealing with the matter.

Mr Arkell’s first concern is that there should be a full retraction at the earliest possible date in Private Eye and he will also want his costs paid. His attitude to damages will be governed by the nature of your reply.

We acknowledge your letter of 29th April referring to Mr. J. Arkell.

Pantsuit power play. The biggest-name US Presidential hopeful is taking her campaign for America’s top job to all corners of the internet, moving now to Instagram, where she posted her first photo yesterday. With this level of coverage and hype already, imagine what it will be like in November next year. Of course her first photo is of some of her favourite pantsuits — in red, white and blue, naturally. 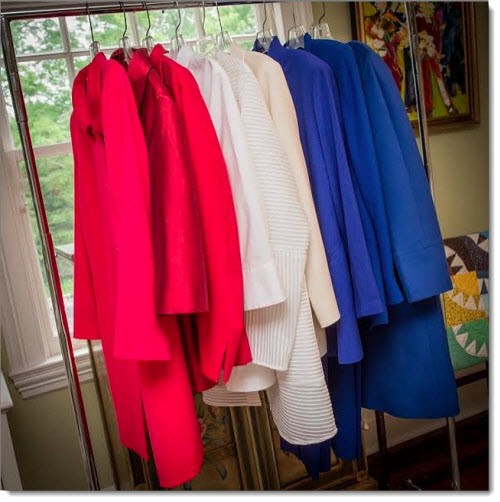 Ms Tips clearly needs advice from someone of average intelligence about how to break into the housing market in Sydney.

3. Give up on your dream of a 3 bedroom terrace with garden in Erskineville or Carlton as your first home.

While I might agree that Nick Jensen’s opinion piece is rambling, it doesn’t seem to me to be borderline nuts. He is identifying the difference between a civil marriage and a sacramental marriage, a difference which is implicitly recognized by everyone who chooses to be married by a marriage celebrant rather than a minister of religion.

He then follows this through to the conclusion that if he and his wife don’t like the state’s definition of marriage, they will reject the definition by divorcing.

While not everyone would find his premises to be sound, the conclusion he draws is logically valid.

Presumably Ms Tips is labouring under the foolish assumption that someone on an average income should be able to afford an average home.

Give up on your dream of a 3 bedroom terrace with garden in Erskineville or Carlton as your first home.

Doctor,
Sometimes I think the sight of a comment from me creates a compulsive need in you to post what often turns out to be a quite inane contribution and your effort here is a great example.

Tens of thousands of people on average incomes can afford and indeed own average homes in Sydney. It’s not a foolish assumption at all. It’s completely true.

Tens of thousands of people on average incomes can afford and indeed own average homes in Sydney. It’s not a foolish assumption at all. It’s completely true.

They can’t even afford a below-typical $500k home.

Not even if the bank is irresponsible enough to lend them that much.