If Q&A is, as its tagline suggests, “democracy in action”, then democracy has become little more than the opportunity to enjoy strong feelings. 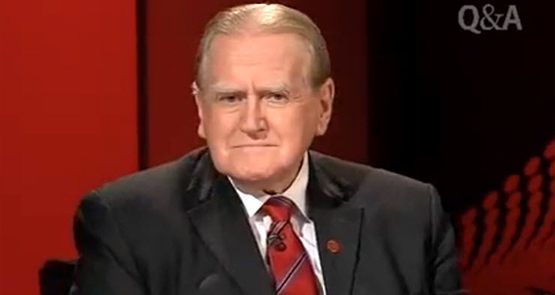 If there were ever a moment gloriously disposed to frank discussion of LGBTIQ life and the problems it encounters and provokes, we can be pretty sure traditional media will wrap it in a feather boa and strangle it to death. Whether it’s the more common “tolerant” approach, most visible these past few weeks in reports on Caitlyn Jenner, or its conservative antagonist that says “surely, there are more important things to talk about than Caitlyn Jenner” before resuming talk about such life-changing matters as the “PC” language used to describe Caitlyn Jenner, all queer issues are quickly reduced to media issues.

From the terabytes of tolerance read in pieces on the correct form of address for transgender women, to the angry, empty exasperation of those who make a living recovering false memories of a perfectly heterosexual history, it’s all bollocks. Or, to be mildly less crass, it’s a branding exercise. To talk about LGBTIQ is rarely, if ever, to talk to the LGBTIQ community. Politicians, commentators and media organisations rarely take a “stand” that is informative, or even curious, on these matters. Rather, they employ a strategy to declare that they are either (a) culturally liberal and compassionate or (b) just damn sick of this self-indulgent world. Queer people serve chiefly as positioning statements in either case.

We’ll almost certainly see this conversation, and these identities, asphyxiated to a marketed nothing next Thursday when ABC’s Q&A gives special time to LGBTIQ. An optimist could see this hour as a timely opportunity to talk about an era that finally sees gender and sexuality as unstable constructs. A realist might see it as another glass half full of diluted fizz. The broadcast might be well intended, but its execution already seems sloppy for several reasons. First, it is programmed as an appendix to a documentary on the 20-year-old film Priscilla: Queen of the Desert; the disappearing tradition of drag performance is hardly a current or a representative basis for discussion. Second, its irregular time slot implies a kind of glitter ghetto too outrageous and/or insubstantial for standard programming. Third, producers have invited NSW politician Fred Nile to speak/thunder about murky passages from Leviticus.

“What we will have instead is the brutal simplicity of ‘homosexuality is wrong’ met with ‘no, it’s not’.”

Broadcasters must, of course, draw on a range of typical or provocative views in discussion of an “issue”, but Nile’s are about as typical as a telegram and as provocative as a Reverend’s robe. Arguing with the 1950s makes no real sense, and if one wishes to find a more representative homophobe, one need not look further than the offices of News Corp. It is as easy as it is irritating to argue with Nile, whose views are derived even less from the Old Testament than from a quaint absence of thought, and that this elderly caricature should be held as the real opponent for difference is nonsense. Like all truly effective forms of prejudice, true homophobia is hard to see. It should be the job of the national broadcaster to draw it out and not simply provide a crude finger-painting of it.

But primitive idiocy feeds Q&A every week, and we should hardly be surprised that this is just another hour that claims to be “democracy in action” but is actually just stale deadlock that serves make-believe nourishment to an era of intellectual famine. Thanks to Nile’s presence, even the formidable scholarship of Professor Dennis Altman will be reduced. This is a great shame. Altman, a local academic who can lay literal claim to writing the book on Gay Lib, is one of the few reasonable thinkers who has posited clear objections to the need for same-sex marriage. But the stench of Nile’s brimstone raging will be sure to choke the possibility of any of the fascinating debate that occurs within the LGBTIQ community. What we will have instead is the brutal simplicity of “homosexuality is wrong” met with “no, it’s not”.

Crude disagreement is easy to produce, and it’s also a strong ratings guarantee. There is no doubt that this performance will appease both the conspicuously tolerant and the profoundly embittered. What it will not do, however, is really engage thought.

What Q&A reliably offers is the chance for agreement or revulsion for plainly stated, plain views. And so, in this special hour of post-“frocks and cocks” broadcast, all it will do is what it always does, which is to stifle genuine policy discussion in favour of letting us all take a pointless stand on Good and Evil. That it will do so with even less subtlety than is usual reveals to us not only the shortcomings of the program — always a cheap representation of “democracy” and never the source of effective thought — but the way in which LGBTIQ “issues” more generally function. That is to say, they give audiences the opportunity to feel.

The opportunity to change is secondary to the opportunity to feel. One feels either a sense of one’s own humanity in being concerned or a sense of one’s own morality in being disgusted.  We can be led in these terms only to policy discussion of amendment to the Marriage Act and no further. Topics like health services, housing and poverty, which are of immediate concern to sectors of the LGBTIQ community, are not even secondary to a conversation that is, at worst, about the fact of that community to exist and, at best, an opportunity for a display of tolerance.

Tolerance or its stouter cousin “celebration” are, of course, nice qualities. But, unlike successful ‘90s drag performance, it don’t pay the rent. Personally, I would prefer no discussion of LGBTIQ issues at all to the sort that exists chiefly to affirm a false sense of “democracy”.

If Q&A is, as its tagline suggests, “democracy in action”, then democracy has become little more than the opportunity to enjoy strong feelings. And the LGBTIQ community has become a means to provoke these feelings with action on their remediation — through, for example, programs on shelter from violence or access to medical and mental health services — just as inert as the program that will next week imitate another hour of “action”.

The sky’s the limit for Arsehats of the Year

Again thank you Helen for so clearly articulating how some of us feel. I’m going the “full Garbo”

I’m not sure if you mean Garbo as in “I want to be alone” or as a sanitation worker, Carlene. Either way, though. Let’s just take out the trash.

I did mean tHe I just want to be left alone but Either works!

Helen, a far more significant issue is how the ABC’s Q & A Programme may pretend to some form of objectivity, it’s usually a carefully choreographed presentation of whatever P.C. Fads happen to be flavour of the day.
That would be something for some at Crikey to get their Razer Sharp teeth into.

Agreed, a doco on ‘Priscilla’ as the lead in programme is way too predictable. Ditto to the presence of Rev Fred Nile.

As I recall, Q&A broadcast a special programme with Bill Gates – this was scheduled on 28 May 2013, a Tuesday evening. Gates is hardly “too outrageous and/or insubstantial for standard programming”. Hence criticism of the ‘Q & Gay’ timeslot being questionable on any night other than a Monday is unwarranted.

It would not be smart scheduling for the ABC to meddle with their stellar Monday night lineup by ditching Four Corners & Media Watch to slot in a Priscilla doco prior to Q&A.