A group of three cross-party MPs has been taking the slated Trans-Pacific Partnership free-trade agreement to task, writes Matthew Rimmer, Associate Professor at the ANU College of Law. 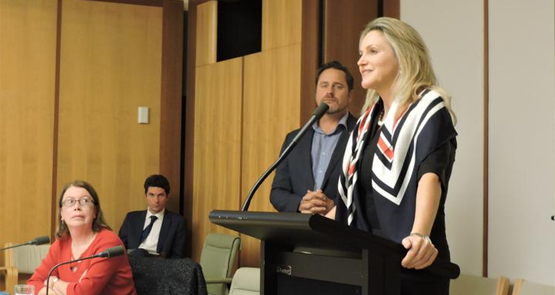 The debate over the mega-trade deal the Trans-Pacific Partnership has reached a fever pitch in the United States and Australia.

In Australia, the Coalition has heavily promoted the TPP, arguing that it would be a boost for jobs and economic growth. But serious concerns have been raised about the process and the substance surrounding the deal.

On the May 25, 2015, a cross-party working group on the TPP was established in Parliament. The founders include Labor MP for Fremantle Melissa Parke, Senator Peter Whish-Wilson of the Greens, and independent South Australian Senator Nick Xenophon. The group has been dubbed “the Avengers” — after the Marvel superheroes. The group has raised a number of issues about the process and the substance of negotiating the TPP and other international trade agreements.

In her speech, “Who’s Afraid of the TPP?“, Parke MP compared the TPP to a tsunami that would swamp Australia before the public or politicians realised what was taking place. She warned:

“The TPP is being sold as a trade agreement that will reduce tariffs and gain access for farmers to markets but in truth, the TPP is primarily about control of the regulatory framework of countries for the benefit of multinational corporations, who by the way have been party to the negotiations on the TPP.”

Parke was particularly concerned about the inclusion of intellectual property and investor-state dispute settlement (ISDS) in the TPP. She feared that “a TPP with an ISDS clause would manacle the hands of elected governments at every level as well as the courts in perpetuity, giving multinational corporations the exclusive keys to the country”. Parke declared: “In our view, the TPP is a Trojan horse for ‘Taking Power from the People’.” She highlighted the impact of the trade deal upon human rights, public health, and the environment.

Xenophon was critical of Australian governments and consumers being subject to further review by international investment tribunals. He noted: “Forty years ago Gough Whitlam abolished appeals to the [British] privy council in what was a watershed moment for Australian sovereignty.” Xenophon lamented: “We now seem to be going back to the colonial era where court cases, not just appeals, will be determined overseas.”

Trade and Investment Minister Andrew Robb offered MPs private briefings and viewings of the TPP (subject to four-year long confidentiality orders). A few politicians took up the offer. As the Greens’ spokesperson on trade, Whish-Wilson objected: “I will not be taking-up the supposed offer to view the text as that would be feeding into the unnecessary secrecy that surrounds the deal …The government should be releasing information to the public, not just a select few.”

Civil society has also been suspicious of the secrecy surrounding the deal. CHOICE Australia has raised concerns about the impact of the trade deal upon consumer rights. The Australian Fair Trade and Investment Network, an association of community organisations concerned with fair-trade policy, is alarmed about how the deal will undermine fair trade. The Australian Council of Trade Unions passed a resolution calling for the negotiations on the TPP to be halted.

But while the Department of Foreign Affairs and Trade has sought to keep the public in the dark about trade deals, WikiLeaks has provided a steady stream of leaks. Thanks to Wikileaks, we now have the draft texts of key chapters of the TPP — including the intellectual property chapter, the investment chapter and the environment chapter, and today, the health annex.

The health annex to the Trans-Pacific Partnership poses significant threats to public health, particularly in Australia and New Zealand. Dr Deborah Gleeson from LaTrobe University has provided an extended commentary of the text of the latest leak. She says the annex is “clearly intended to cater to the interests of the pharmaceutical industry”. Gleeson observes that the “inclusion of the Healthcare Transparency Annex in the TPP serves no useful public interest purpose”. In her view, the regime “sets a terrible precedent for using regional trade deals to tamper with other countries’ health systems”. My concern is that pharmaceutical drug companies will use the provisions on procedural fairness and consultation to bully governments into promoting private health measures.

WikiLeaks has established a new campaign to crowdsource a $100,000 reward for the leaking for the rest of the agreement. Writing for The New York Times, Kelly McBride has commented that “the bounty may be the best shot we have at transforming the TPP process from a back-room deal to an open debate”.

Meanwhile, a freedom of information request by Intellectual Property Watch has highlighted how industry insiders have been dictating the text of the TPP to officials from the United States Trade Representative office.

Such revelations highlight the need to release the full text of the TPP to the wider public. There should be an open and transparent debate about the agreement, across the Pacific Rim.

Instead of recycling this material, surely it would be a good idea for Crikey to present a concise summary of what it believes the effects — positive and negative — of proposals, and go on to suggest whatever its consulted experts feel the Parliament should or shouldn’t do?
If this were to be done there might even be a response other than mine on this thread.

‘Fever pitch’? I get the impression the TPP is barely on the radar for most people. The ‘debate’ might reach ‘fever pitch’ once the treaty is ratified, at which point the Australian people will wake up to the fact that their elected representatives have walked them blindfolded into the biggest and most transformative trade deal in a generation.

Maybe you can answer a question I have, Matthew: treaty making power being an executive power under the Constitution, does the TPP need enabling legislation to take effect? My reading is that the International Arbitration Act 1974 already provides the legislative basis for ISDS clauses to be enforced in Australia, but I could be wrong.

The debate over the mega-trade deal the Trans-Pacific Partnership has reached a fever pitch in the United States and Australia.

Reached a fever pitch ? Between the media near-blackout on the topic and distraction by politicians whenever it is raised, I would have gone with “loud whisper”.

The TPP is just the next step in privatising and financialising the world, including – especially – Governments.

Instead of recycling this material, surely it would be a good idea for Crikey to present a concise summary of what it believes the effects — - positive and negative — - of proposals,

How could they ? People who have seen what’s in the TPP aren’t allowed to talk about it in any detail.