The Daily Telegraph's Janet Fife-Yeomans has asked Sydney City Council why on earth it would give money to NGO 1 Million Women. But awkwardly, Fife-Yeomans is the NGO's ambassador.

Fresh from a fortnight of relentless critical asides about Sydney’s lord mayor, the Daily Telegraph is at it again. Today on page 5, below a photoshopped picture of Clover Moore on a pushbike stuffed with goodies, the paper takes a shot at the “cycling-obsessed mayor’s latest follies”. In a $13 million grants budget, Sydney City Council has spent $9000 teaching people how to cycle, $10,000 for Mandarin lessons, and, would you believe it, a scheme that gives 10 women money to reduce their power bills. Reportedly. 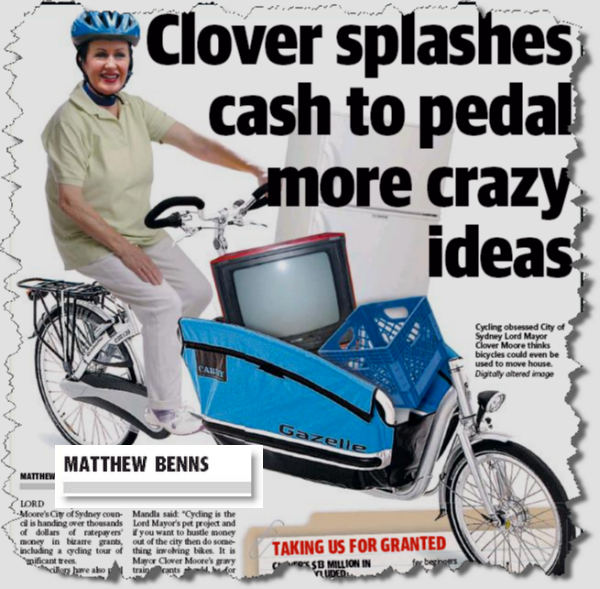 A little more on that last one. It was a grant, given in 2013, to “10 women to help them reduce their power bills by 20%” (as the Tele puts it). Daily Tele chief reporter Janet Fife-Yeomans, one of the paper’s biggest names, emailed the council yesterday to ask about several of the grants, including the energy one, and to put to the council a series of questions, including whether the council had nothing better on which to spend its money.

She got a response from a council spokesperson, which Crikey has seen, saying the grant went to NGO 1 Million Women to fund a three-month trial looking at ways to encourage better home energy usage that, if successful, could go towards helping the organisation’s 82,000 members reduce their home energy use. The spokesperson also noted that the organisation had a number of high-profile ambassadors, including Fife-Yeomans herself. By the by, Fife-Yeomans describes herself as a “huge admirer” of 1 Million Women founder and CEO Natalie Isaacs on the organisation’s website. “She made it sound possible that we can really do something to cool down climate change,” Fife-Yeomans is quoted saying.

So, the question is: would Fife-Yeomans’ byline appear on a piece bagging the council for giving money to an organisation for which she is an ambassador?

The answer is: no. Matthew Benns is listed as the sole author, even though it was Fife-Yeomans who was chasing up comment yesterday. She didn’t even get a research credit. Why could this be? Crikey asked, noting the awkward situation with Fife-Yeomans being an ambassador for the organisation and all that. She gave us this response: “I did not write the story. That is why my byline is not on it.”

I know the Tele upsets many in Crikey-land, but (and I am an occasional buyer), we can all think for ourselves…

And the Tele’s more typical buyers (yes they come from the western suburbs) are capable of forming their own opinions. Many will be amused (as I often am) by the Tele’s photoshop artists’ work. That stuff takes skill and effort, it’s incredibly time-consuming. And as a media worker do think its abmirable that at least one outlet allows its staff so much creative latitude, and pays them to do so…

But not if their efforts are directed at one of our “heroes”, oh no!

But relax. Clover Moore is big enough and powerful enough to withstand this. Even if the Tele’s readers were influenced, hardly any of them live in the now incredibly wealthy inner city enclaves she represents. That, as we all know, is Crikey-land.

It’s rampant bullying beyond belief. The Tele has taken its sick Clover Moore hate obsession to a new level and then some. What bugs me is that they could, in tabloid style, go after those in NSW politics who are truly deserving of criticism. You know, all of those dodgy and corrupt pollies. All of those wheeling and dealing mayors, particularly those from councils which actually preside over the majority of the Tele’s readers. But no, they leave that to Fairfax Media because Paul Whittaker is obviously bereft of ideas, money and understanding of what truly would be good ‘for Sydney’. Instead he focused relentlessly on an incorruptible female leader who is actually running an extremely effective and efficient council, just because she leans to the left and won’t do what they say.

@[email protected] ,I don’t like the Tele,prefer to read Crikey but don’t live anywhere the inner city, I’m a way out west . People who choose to read the Tele prefer not to think for themselves, if they did they simply wouldn’t give that rag a second glance. You claim you’re an occasional Tele buyer and to know where the typical Tele reader and Crikey reader lives but you don’t mention where you live, so I guess that must be La-la land.