Rundle: a tense Turkey holds its breath for election fallout

The Kurdish HDP has won a historic victory in Turkey. But the ruling establishment is not going down without a fight. 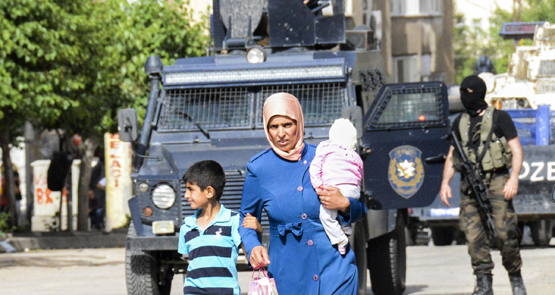 When we came into Diyarbakir, they were getting ready for day two of celebrations, after the surging victory of the Kurdish/left HDP party, bumping into Parliament with 80 seats and 12% of the vote. In Gaziantep, it had been fireworks and handguns in the air. Here, in the capital of Turkish Kurdistan, a place once more or less under occupation, the party had been going from 48 hours.

At a field on the edge of the place, ringed by the vast, vaguely stylish 10-storey apartment blocks that surround every Turkish city, the cars were piling in as dusk hit, four or five people hanging out the windows waving the green, red and yellow Kurdish flag, and, yes, fireworks, and yes, handguns, and AK-47s. Jesus. They were letting them off over empty ground, to be sure, but still it was full on, a celebration of a people who had taken to arms decades ago and were now leading the peace process. Firing over empty ground counts, I guess, as health and safety here. True, the place was ringed by robocops, water-cannon trucks, and a couple of APC’s, but they were hanging back, however much some of them might have wanted to do otherwise.

But less than 24 hours later, the firing had started for real, with four people shot dead at the offices of Huda Par, a small ultra-Islamist political/religious outfit based here. The first to be shot was Aytac Baran, the leader of the group’s charity, Yeni Ihya Der, as he stepped outside the office in a crowded shopping area of the city. The PKK youth wing was immediately accused of the killing, and two members of it were killed in a payback attack in the area. Your correspondent was miles away drinking tea and eating honey-pistachio cakes — rather fortunately, as journalists and police who turned up to the Huda Par offices soon after the shooting were attacked by members of the group wielding machetes.

Rumours ran wild through the city throughout the afternoon about who might be responsible, with most presuming that some elements of the state had been involved. The shooting came on the day police arrested an allegedly Islamic State-affiliated man for the bombing last Friday, two days before the election, in which three people were killed and a dozen critically injured.

“That bomb was meant to kill a lot more people,” said Mervon, proprietor of one of the dozens of little courtyard cafes springing up in the city’s bluestone 1500-year-old Old Town, in lieu of industry. “As to this attack, who knows? I’ve heard every story it was the state, it was the deep state, it was ISIS, it was the CIA it was Mossad.”

In the afternoon, HDP leader Selahattin Demirtas appeared to tell HDP supporters to avoid street clashes and to stay off the street and “the street”, explicitly referring to the somewhat nebulous idea of a field of public action and judgement.

Should the incident be something other than a bit of score-settling, then it represents a dangerous stage in the post-election process. With the HDP’s vote having normalised the idea of full Kurdish participation in the political sphere — without having to accept a prescriptive notion of universal “Turkishness” — this is something that a certain faction of the religious and nationalist right will not accept.

The pro-AKP papers range from the resigned from the hysterical, with columnists cursing the voters for undermining Erdogan, the “world’s most powerful Muslim”, who was raising Muslim unity and leadership to ever greater heights. The HDP victory is blamed on “internal and external interests” by the more mainstream of the 30 or so dailies on sale each morning — and the “crusader-Zionist alliance” by those less so.

Disorder, or the rumour of it, is vital for one purpose: the frustration of any coalition, and the calling of fresh elections after the 45-day period for trying to form a government has elapsed. One element within the AKP hopes that prior voters — conservative, religiously observant Kurds, and many shopkeepers who took a chance on the HDP — would get buyers’ remorse and shift back, taking the HDP below the 10% threshold, and tumbling the votes back to the AKP for a majority.

But that strategy is already falling apart as the government nervously watches market reactions. The sharemarket fell 8% and the Turkish lira 5% against the dollar. “Erdogan doesn’t want to go because if he goes, he’s gone,” said someone in another cafe. At least some of the shift from Erdogan was public disgust at recent extravagances such as a new presidential residence, hell, palace, initially said to contain more than 1100 rooms, and now estimated at closer to 2000. Erdogan may be keen to keep the AKP in government so he can make it as president to 2023, the 100th anniversary of the republic, and year zero of the second Ottoman empire.

“Are things going to get tense?” I asked a souvenir-shop owner partway through the free watermelon, tea, water and scented hand-oil he had given me. “They’re already tense,” he said. I bought nothing, had no pockets. He did not seem to mind in the slightest. What a lovely, lovely people, what a lovely, lovely place, I thought as I turned out of a back alley in the gathering dusk, to the main street, near the police station. There’d been one water-cannon van. Now there were four, and cage-wagons, and plain-clothes cops with neat small machine guns, and the sound of Velcro ripping and being resealed.

Any chance of some war correspondence from across the border on the kurdish frontline in syria.

Bloody hell, Gail – you don’t ask for much do you? Kurdish Turkey is much more relevant and in need of being Grundled, right now.

An interesting piece perhaps — as one of the forms of Travelogue.

Nice ambiance from the sensitive Grundle.
How does one get 2,000 rooms in any building? Even Versailles only had around 700/

I just hope Erdogan’s palace/home/residence has more style than the home the Turkish people gave to Kemal Ataturk. It is revolting. Yet people wondered why he only stayed there once!?!?