The Killing Season cashes in on free publicity. Plus other media tidbits of the day.

How to promote a TV series. The ABC’s The Killing Season had just under a million metro viewers last night, making it the most-watched non-news show after MasterChef.

It’s understood the biggest bombs are thrown in episodes two and three — the only news story to come out of the first episode was the allegation that Kevin Rudd had tried to physically intimidate Julia Gillard while in opposition (Rudd denies this). Nonetheless, the show was very widely covered by news outlets in the two weeks leading up to the premiere — promotional activity worth thousands of dollars. And more than half the mentions came from the ABC itself on the radio and television.

According to Isentia figures for the past two weeks, The Killing Season received 1040 mentions on radio news and current affairs programs, and just over half (527) of these mentions were on ABC channels. On TV, there were 674 total mentions — 440 were on the ABC. Online it’s a very different story, with the ABC having mentioned the series just 12 times in articles while online media sources (which would include Crikey) mentioning the series 1825 times. However, the online figures are boosted by widespread syndication of a few key stories.

In March this year, Media Watch host Paul Barry criticised his host network for airing clips of Shaun Micallef’s Mad as Hell in news bulletins. “The inclusion of the Micallef satirical clip in the midday news bulletin was not appropriate and was an editorial error,” the ABC conceded. “It is appropriate to cross-promote another ABC program if content from that program has been used in a news program, but the Micallef clip was not appropriate.”

The Killing Season was a genuine news event as opposed to a satire of news coverage, and so it makes sense that the ABC would mention it often in its news coverage. But 979 mentions over two weeks does seem a little much. Of course, the commercial TV networks do this kind of thing all the time. — Myriam Robin

Suckling out. News Corp corporate affairs supremo Adam Suckling has resigned to take up what we assume will be a less stressful role at the Copyright Agency.

Suckling spent 10 years heading up corporate affairs at Foxtel before he was poached to News Corp with his chief Kim Williams. When Williams was purged, a few turbulent months later, Suckling survived. It’s not yet clear why he’s on the way out now — he declined to answer questions on the topic to Mumbrella, and The Australian‘s story didn’t give away much. — Myriam Robin

Training shake-up at Fairfax. Fairfax’s metropolitan papers are shaking up their training functions, and long-standing training editors at The Sydney Morning Herald and The Age could leave the company after decades training the company’s journalists.

Colin McKinnon and Jock Cheetham are currently the training editors at The Age and the SMH respectively. Under a restructure, their roles are being abolished, though Fairfax is creating a new role to teach journalists digital skills across both papers.

“We are in the process of hiring a highly skilled digital editorial capability manager with a specialist focus on driving digital capability transformation across our metro newsrooms,” a Fairfax spokesperson told Crikey. “Whenever there are job changes we understand that there’s disappointment — and in this instance we are looking for new, highly specialised skills. We will continue to have all the necessary resources in place to deliver training and skills development across our business.”

Earlier, Fairfax made regional editorial trainer Mandy Crane redundant as part of the roll-out of NewsNow across Victoria. Many within the papers are now viewing further editorial redundancies at the metros as inevitable. — Myriam Robin

Not me. Taxpayers have paid over half a million dollars for gender-change survey for members of the military in the past two and a half years, the Herald Sun reports. But perhaps the most prominent transgender woman in the military, RAAF Group Captain Cate McGregor, says the taxpayer hasn’t paid for any surgery on her behalf, despite a photo of her and the Prime Minister being used to illustrate the article on Twitter.

She took to Twitter last night to say: “I have not had ANY taxpayer funded gender related surgery. I repeat NONE.” She requested a clarification, but it doesn’t appear any has been forthcoming — the tweet is still up. Comments McGregor gave to ABC Radio are quoted in the piece. — Myriam Robin

Media companies on the run. It wasn’t a pretty sight in the Australian media landscape yesterday, which shrank noticeably courtesy of a surprise earnings downgrade from Nine Entertainment Co and despite of a statement yesterday afternoon from Seven West Media reaffirming its guidance on earnings (which, it has to be said, is a downgrade from the original estimate from last August).

There were swingeing losses everywhere: by the close yesterday, Nine shares led the way lower, losing 16.6% to close a volatile day at $1.66, an all-time record closing low (the stock hit an intra-day low of $1.56). Seven West Media’s shares lost a nasty 11% by the close to end the day at an all-time closing low of $1.06. But shares had fallen to a record low of $1.02 mid-afternoon before the company issued a statement reaffirming its previous profit guidance.

Seven’s statement was a stark contrast to Nine’s surprise profit downgrade last Friday. Nine said it expected earnings before interest, taxes, depreciation, and amortisation to be between $285 million and $290 million, down from $311 million forecast in November. “This reduction in earnings outlook reflects a softer than anticipated free-to-air market in the second half, which is now expected to be in low single-digit decline, driven by particularly soft conditions in May and June,” Nine said in its statement.

Ten shares rose half a cent, or 2% to 24.5 cents as rumours persisted of some sort of deal with Foxtel, and the impact of a rise in ratings for its programming in the first five months of this year. But a rising share price will put more pressure on Foxtel and News Corp (and Telstra) to lift its suggested deal; price from 18 cents a share back to the 23 cents a share first suggested. That would raise more money for Ten. — Glenn Dyer

Who’s afraid of Americanization? The Superlinguo blog posed an interesting question yesterday: “Why is progressive Australia still railing against Americanized spelling and style?” Many Australians (including many eagle-eyed Crikey commenters) think practicing Americanized spelling dishonors our language. Even the staunches republican will see the color red over an additional Z or an omitted U. But Superlingo points out American English might be better aligned with our values:

“US English spelling differences have a deeply political origin which are broadly aligned with progressive political values.

“Most differences we now know between UK and US Englishes came from deliberate efforts to reform spelling in English-speaking North America. These campaigns were largely implemented to increase literacy amongst America’s working poor and to reject the imperial structures which prevented the poor from accessing education and literature.”

So maybe we should embrace the Yankee spelling here, and not just when traveling. We might be more American than we realize. — Cassidy Knowlton

Front page of the day. It was this or Paper Mag’s Miley Cyrus cover. Click through if you dare … 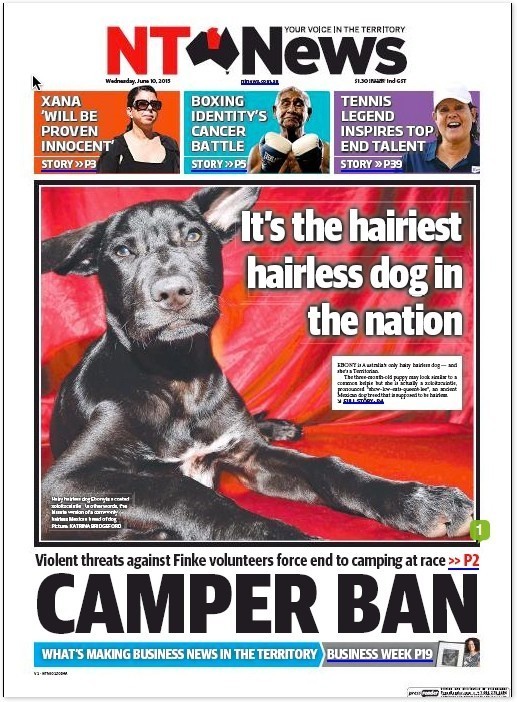 Delightful smile on Bubba Sue. Pigs are people as she proves.