It was a quieter week in political media mentions, despite Joe Hockey's housing comments.

Numbers lower across the board this week as Prime Minister Tony Abbott barely cracked 20,000 items. The most notable exception was Treasurer Joe Hockey, who sailed up the list with a strong tailwind after his comments about how to afford a house in Sydney, which themselves followed on from earlier comments by the PM. In fact he went past the PM on radio, much of it this morning as both AM and FM stations went to the phones to gauge what the punters thought of the comments, with plenty of existing homeowners quite happy to see it Joe’s way.

Meanwhile it was counter-terrorism and the rights of Australian citizens that took up much of the political coverage again this week, with a number of public figures warning the government about any attempt to remove citizenship without due process through the courts, including Human Rights Commissioner Tim Wilson, while the president of the commission Gillian Triggs again raised the ire of Immigration Minister Peter Dutton with her comments about asylum seeker policy. The Minister was also had some words for Greens Senator Sarah Hanson-Young over revelations that she was covertly followed during her visit to Nauru, and the Senator was also in the news for winning a defamation case against Zoo magazine for photoshopping her head onto a lingerie model’s body. Just your average week in politics, really. 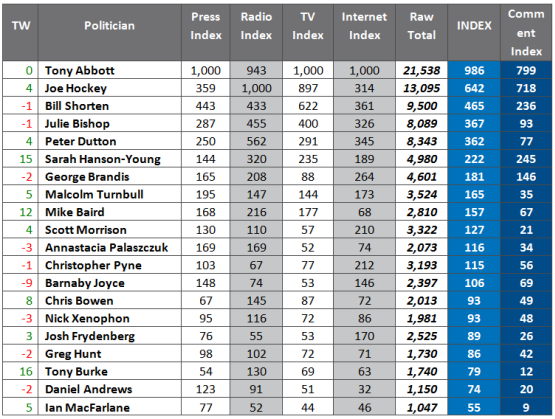 Social media was far less friendly towards the Treasurer’s comments on housing affordability, the response being described by one journalist as “apoplectic”, while Peter Dutton seems to have now completely taken over the mantle from former Immigration Minister, now Social Services Minister Scott Morrison as a focus of online ire.

As mentioned, there were more than a few callers who were happy to support Joe Hockey’s view that getting a better paid job was the best way to home ownership, while there was plenty of discussion of the citizenship issue as well.

These numbers show Alan Bond was still regarded as a newsworthy figure many decades after his prominence – he seemed the quintessence of the ‘80s in so many ways — dream big, work hard, but don’t let caution or ethics get in the way of making a buck. It was an exciting decade, and made more so by Bondy, but of course as many have pointed out, it wasn’t exciting for the people who lost their life savings.

The pitfalls of life as a gofer: lessons from those who’ve served their masters