As an enthusiastic representative of our imperial overlord in Australia, Lowy Institute executive director Michael Fullilove can always be relied on to follow the US State Department line on international issues. And when it comes to leaking, Fullilove has maintained a zero-tolerance policy just like his dear friends in the Washington security establishment, repeatedly savaging Chelsea Manning, Julian Assange and Edward Snowden for revealing US war crimes and illegal mass surveillance by the US government.

Now, you’d think, merely for the sake of something vaguely approaching consistency, Fullilove (here he is with the war criminal Kissinger) would be critical of all leakers. 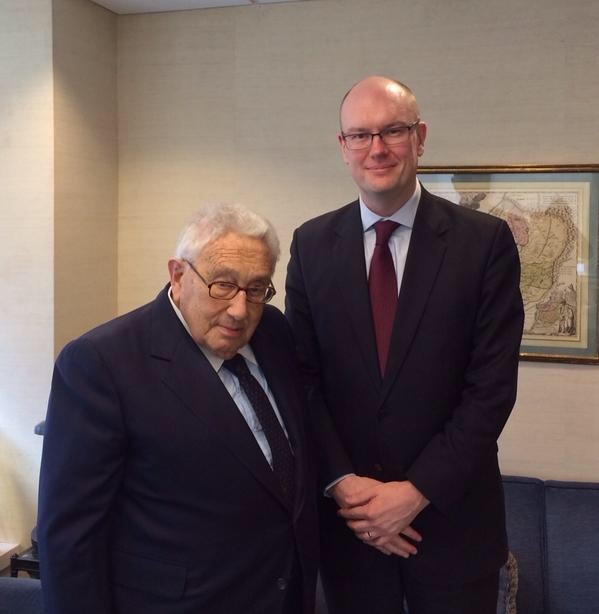 But imagine our surprise when we learnt that Fullilove is proud to host convicted criminal David Petraeus to deliver this year’s Lowy Lecture in September. Petraeus is the former head of the CIA who had a fling with his biographer, during the course of which he passed her top-secret information.

Passed her information, that is, not to expose wrongdoing, not to reveal war crimes, but simply to impress his lover.

Moreover, unlike other leakers, Petraeus lied to FBI agents investigating the handing over the information, which would have caused “exceptionally grave damage” to national security. But rather than go to jail like Chelsea Manning, or John Kiriakou (the CIA officer who revealed the agency’s torture program, and who remains the only person jailed in relation to that program) or other whistleblowers, Petraeus was given a slap on the wrist so slight even the FBI was angered by it.

So we asked the Lowy Institute to explain its volte-face on leakers — and for that matter why Petraeus’ pleading guilty to leaking isn’t mentioned in its PR blurb for the event. Sadly, we received no response from them (perhaps they operate on DC time?). Maybe a Lowy Institute employee will leak us why Fullilove now thinks leakers should be welcomed with open arms.

Oh, and why is the Australian government — bearing in mind the Attorney-General claims Edward Snowden is a “traitor” for his whistleblowing — giving a visa to Petraeus, a convicted criminal who leaked information that would have caused “exceptionally grave damage” to national security?

Tips and rumours: David Petraeus and the oaths that matter

The glamorous exceptions to Obama’s war on whistleblowers

Lest we forget that Lowy himself is a terrorist who is passed off by both sides of politics as some sort of worthy refugee.

Fullilove is just doing his job.. as a professional apologist for war criminals. Thanks for noting the hypocrisy, Mr Keane, keep it up.

Yet another example of Laws being only for little people who discomfort the rulers, not those who grovel for the crumbs from the tables from the Great & Good.
It’s hard to decide which of the figures in the accompanying photo looks the most loathsome… so I’ll go with both.

Not just an enthusiastic acolyte of the State Department. Articles are published by its daily blog The Interpreter, which invites comments. Anything that is contrary to their view of the world is simply censored out. Given its academic pretensions that is nothing short of a disgrace.

Bravo Bernard! Right on the money there. I am resubscribing now!!!