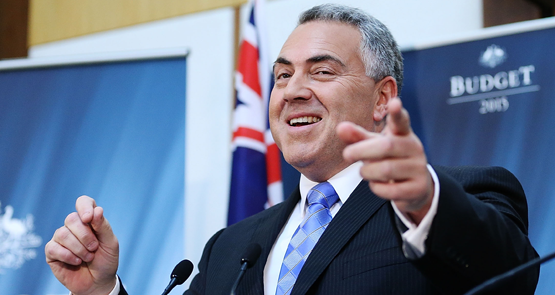 Even after we’ve become inured to the steady stream of gaffes from the Treasurer, yesterday’s comments on housing affordability by Joe Hockey displayed a worrying inconsistency from the man charged with oversight of the economy.

Hockey was asked about housing affordability in Sydney, and said:

“Look, if housing were unaffordable in Sydney, no one would be buying it. People are purchasing housing in Sydney, it’s expensive. As a multiple of average weekly earnings it is expensive, it’s an expensive city to live in …”

Of course, those were the words that unleashed a torrent of criticism about how out of touch it is for a North Shore bloke on $350K a year, and with a wealthy wife, to tell people “get a good job”. And how right is he? Imagine everyone who wants to get into the housing market in Sydney hears Joe’s advice, slaps their forehead and thinks “he’s right, I’m gonna get a new higher-paying one and ask the bank to increase the amount of money they’ll lend me”. What if just a fraction of the Sydney population that wants to enter the housing market got a higher-paying job and approaches their bank for more money? All that extra money chasing the same amount of property will simply accelerate the rising cost of prices.

But good luck getting that “good job”. Under the Coalition, wages growth has slumped to the equal-lowest level since the ABS started compiling a wages index in 1997 (we used private sector numbers, because this morning Joe said that that’s where the better-paying jobs will come from – too bad if you’re a nurse or policeman).

And while that slump has helped boost jobs growth faster than forecast, it’s been nowhere near enough to support a rising level of household consumption. Last week’s national accounts show that Australians actually ran down their savings in the March quarter (so much for the “wealth effect” from rising house prices) to finance house purchases and other consumption.

Now, we may get lucky and experience a wages recovery like we did in the wake of the financial crisis, but don’t count on it when unemployment remains half a point higher than when the Coalition entered office. Wages are barely rising enough to keep pace with our low rate of inflation, let alone the 30% or so that Sydney house prices have risen since 2011, or the double-digit growth cities like Melbourne and Brisbane have experienced (come to Canberra, though — prices have risen slower than CPI here. It helps when Labor and Liberal governments sack thousands of public servants).

So, if you’ve avoided getting one of those jobs that pays more because of penalty rates, or pays more but makes Australia less competitive, then you’re sweet. But then, having offered that advice, Hockey continued. Having said earlier that “the best way to address inflated house prices in Sydney is to build more properties, build more properties”, he said:

“I know, it’s a difficult concept for some to get their heads around, supply and demand, but it’s not that complicated. If you increase supply to meet the demand, then obviously you won’t get the growth in property prices that you may have thought if you have less supply.”

We’ll also leave aside that Hockey thus contradicted the Prime Minister, who wants Sydney housing prices to keep rising (because, he said, he owned one himself, which is a generously broad view of the issue from Tony Abbott). Hockey is in favour of curbing house-price growth by increasing supply — an eminently sensible position and a good riposte to the “housing bubble” claims. What’s he doing to bring that about? The only policy the government has affecting housing supply is its xenophobic campaign against foreign residential investment. Indeed, the press conference Hockey was speaking at was called by him to announce that 195 cases were being investigated for “unlawful purchase of residential real estate”.

One hundred and ninety five. Sounds impressive. But let’s assume that’s not the total, but just one month’s average. Let’s assume, every month, Joe will get 195 new cases of foreigners busted for buying property (Joe boasts he’s dobbed one in himself). In April, there were 347,000 property listings across the country. So Hockey’s policy is aimed at 0.0006% of the housing market. Even if we narrow the numbers down to housing loans, the Australian Bureau of Statistics housing finance data (updated yesterday) shows housing loans are running at an annual rate of more than 600,000, including 500,000 loans a year to buy established homes. Joe’s 195 a month is less than half of one per cent.

In fact, the most likely effect of the government’s Dob In An Asian campaign is that foreign investors are going to look elsewhere — reducing the pool of investment available for new housing stock, because, unlike domestic housing investment, foreign residential investment predominantly flows into new housing stock.

Anyway, instead of everyone discussing the huge success of Joe’s anti-foreigner campaign, what’s everyone talking about? His “let them eat cake” moment. With no let-up in the Treasurer’s prodigious gaffe rate, there are unlikely to be too many defenders left of Hockey within the government. Rarely has there been a senior politician more capable of pushing a government off-message.

“yesterday’s comments on housing affordability by Joe Hockey displayed a worrying inconsistency”.
True, BK and GD, but it is the underlying consistency of attitude that worries me more.

Why is no-one focusing on the bit where he said “and if you have security in relation to that job”? From a Government that is promoting the conditions that work against job security – and not only in the poorly-paid jobs either. Does he think that individual contracts (dead, buried, cremated my a***) promote job security??? The workforce is heading in the other direction, as the labour market scholars will tell you. Mass casualisation is locking people out of access to finance – not just mortgages, but ANY loans. With a casual job, you’re simply too risky to lend money to – even if you’ve been doing that “casual” job for 5-10 years.

Let’s look at an example, not from the poorly-paid retail sector or even the moderately-well-paid-but-still-unable-to-afford-Sydney housing professionals like nurses and teachers. Let’s consider… um… University staff, usually thought to be well-paid. Does Hockey not realise that cuts to university funding promote casualisation of the workforce? That only 3 out of 10 of all jobs created in HE since 2004 have been continuing positions? (Thanks NTEU for that figure)

If it’s like that in a relatively prosperous industry (despite the funding cuts), what must it be like in the others? Maybe the small business owners can use their tax breaks to employ people on a permanent basis instead of using revolving-door casuals.

“Get a hair shirt and get a real job….”
He’s no ordinary Joe is he – living where he does, when he’s not “at the office”, paying the missus – to stay at her other place – out of the public purse?
How many others of us can buy an investment property in Canberra; put in the other half’s name, then pay them (in Living Away From Home Allowance, from the public purse) to let us stay there while we’re working in Canberra?
Catch Saul Eslake today?
[Maybe we could get one of those casual mortgage/loans to match our casual employment?
Who is buying that property? Investors? It’s affordable for them, sure. But what about for those average dear “Westies” this government and their cheer squad are groping up?
What if you can’t afford the sort of education needed to get one of those “myriad” of jobs Joe Dodgy seems to think are out there?
How easy is it to get adopted by one of those rich foreign investors?
If we fail to live up to his expectations do we become Losers? Depressed? Then what?]
No he’s not your Average Joe – he’s the LEANER, meaner Joe?

Oh Woe! Oh Fie! Where is Brave Sir David “One” Hand? Surely he must be sharpening his trusty steed to charge swingingly to the rescue of his beloved Tory Clowns, beset by the horrid laughter and ridicule of the Dreaded Leftists and their insufficiently privileged fellow travellers?….
That’s odd. I could have sworn I saw him defending his heroes from the dreadful contempt of the Totally Biased BK only yesterday. Must have been an echo.

Did you mean ‘too bad if you’re a nurse or policeman police officer or male nurse…?
Leventy’s desperate efforts on ABC local radio this morning to extricate oversized pod from orifice was not edifying. He is a perfect example of someone who should leave it firmly lodged, if only to stop him saying more, even dumber things.