FIFA has become synonymous with corruption and scandal. And why should you care? Because it's your money, writes Crikey 2014 World Cup correspondent Django Merope Synge. 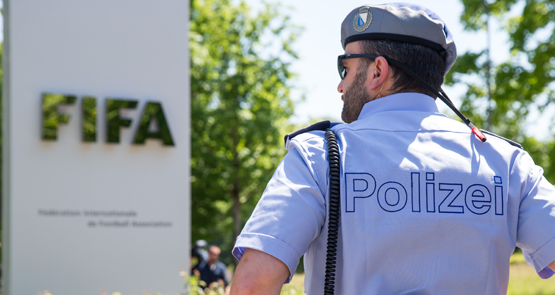 Early in the morning of Wednesday, May 27, plainclothes Swiss police streamed into the five-star hotel hosting FIFA bigwigs in Zurich. Seven men were arrested in the raid and frog-marched out to face extradition to the United States and the prospect of a long prison sentence. After this latest scandal, it is no longer possible to pretend that world soccer governance is anything more than a vast network of organised crime. But what does it matter, if you don’t like soccer?

This raid was sparked from a five-year investigation by US authorities into money laundering and racketeering in American regional soccer groups. The first indictment handed down in New York details “systematic payments of … well over $150 million in bribes and kickbacks” within the Americas alone.

But that’s just one little splash in the pond. Over the past decades the raison d’etre of FIFA has become siphoning off money for personal gain. In 1998, some African delegates to the FIFA World Congress were offered envelopes with $50,000 in exchange for their vote. They formed an orderly queue outside a Paris hotel to receive their reward. In 2011, Caribbean delegates to the World Congress were texted with an offer of envelopes containing $40,000 each.

In the time in between, Brazilian officials accepted $40 million cash from a sports company (widely reported to be Nike) to gain preferential treatment in bidding for a lucrative sponsorship deal. Swiss marketing firm International Sports and Leisure ran a bagman for years, whose job was to fly briefcases of cash around the world, trading them for the contract to resell TV broadcasting right to big games at a 25% profit. And now the amounts involved have become astronomical, with Qatar planning to spend a total of $200 billion on hosting the upcoming 2022 World Cup.

We should care about this because all of the money has to come from somewhere, and for the most part that somewhere is our taxes. FIFA have become masters of turning a personal profit from taxpayer cash. Even Australia, longtime huffers and puffers at the injustice of FIFA corruption, is under investigation for funneling $500,000 to Trinidad soccer official Jack Warner.

We should also care because even when the money is rich Arab oil cash, the games still have real-world consequences. No one knows how many workers have died so far preparing infrastructure for the Qatar World Cup, but the International Labor Organization estimates about 1200 to date. That’s a heavy toll to appease the vanity of rich men.

FIFA’s top brass are spectacular barnacles when it comes to hanging on through a crisis, but this time people seem genuinely scared. The resignation of FIFA president Sepp Blatter was both unexpected and completely unprecedented.

The immediate questions now facing FIFA are who will replace Blatter as president, and whether Russia (2018) and Qatar (2022) will keep the right to host their respective World Cups, laden as they are allegations of widespread corruption.

But to understand why these questions don’t actually matter, we must first understand why corruption at FIFA isn’t just the culture, it’s how the system is designed to operate.

FIFA is structured a bit like the UN General Assembly in that each country gets an equal vote. Like at the UN, votes of the smaller countries have the power to swing any vote. And those crucial little votes are very much for sale.

This whole rotten system began with the election of Brazilian Joao Havelange to the FIFA presidency in 1974. Flush with cash from growing TV audiences and new corporate sponsorship deals, Havelange began to pump money into tiny soccer associations throughout the Third World.

Developing sports infrastructure in poor countries looks fantastic in annual reports, but the reality was ugly from the very beginning. Huge stadiums were built and stayed empty in minuscule nations that didn’t even have a team to play in them. Millions of dollars of grant money were siphoned away to pursue personal projects, and soccer administrators became a generation of small-time pork-barrelling politicians.

When Blatter became president in 1998, the money involved began to get bigger and bigger. Before Blatter, being a soccer administrator in the Cayman Islands or Vanuatu was a volunteer gig without much prestige. Now, the lives of these small-country soccer chiefs became a carousel of first-class airfares, five-star hotels, champagne receptions and luxury summits and briefcases stuffed full of cash.

Reflect for a moment on exactly what it takes to become the soccer boss in the Solomons or Somalia. In the Blatter era, being a soccer administrator has become one of the easiest get-rich-quick schemes around. And no one inside will accept any change that disrupts the money-go-round that now lies at FIFA’s core. In the words of Lee Harmon, boss of Cook Islands soccer, “before Blatter became president, you know how much funding each member association got from FIFA? Zero. Is that enough to convince you why we’re voting for Blatter?”

The same people who voted for Blatter are the ones who vote on his replacement, so the new president of FIFA will inevitably be the person best placed to continue his system. And if the World Cup hosting rights are actually taken away from Russia or Qatar they’ll still end up with the next countries prepared to front the most bribes.

So the real question becomes how long governments will keep pouring in the money that makes the whole system tick. Because at the end of the day, this isn’t about what’s good or what’s bad for the sport. It’s about billions of tax dollars siphoned to the pockets of absolute slugs. About a huge network of organised crime operating for 40 years out in the open. About the 1200 immigrant workers dead in Qatar. It is in the service of a sport, but this is no game.

The 2015 Crikeys: Bronnie the most scandalous of the year

The 2015 Crikeys: the best and worst of business

Qatar is a bad choice for the world cup for a lot of compelling reasons. A summer tournament would almost certainly kill players and spectators so they’ve moved it to November and December, disrupting the 6 biggest leagues in the world.

If EUFA decides not to turn up in 2022, Qatar will lose the tournament within 24 hours.

If you think that the FBI’s sudden concern for corruption in FIFA is about corruption in FIFA then I have a bridge in Brooklyn to sell you. The sums involved are small change compared to the billions corruptly obtained by banks “too big to fail” and bankers “too big to jail”. If the FBI showed a fraction of the concern for those truly great (and admitted) rorters of the system then they might, just might, be faintly plausible. As we know, not a single banker has gone to jail.

In fact, a dollar to a doughnut this is really all about taking away the 2018 World Cup from Russia. Nothing to do with football. It’s all part of the US’s geopolitical warfare.

They should just wind up FIFA and start again. It is rotten to the core. The Cook Is with a population of around 13,500 have received $1m since 2011. You might ask where that money went. No wonder all the small countries are keen to keep the status quo.

If a screenplay was written based on this FIFA saga nobody would option it – the criticism being that it’s too fantastic & no audience would swallow it.

So they’ve avoided killing players and spectators with heat stroke, but how about the workers?