Was there a problem with NSW firies' helmets? ... Leyonhjelm's potty mouth ... is Chris Judd switching sport? ...

Colourful language Leyonhjelm. Liberal Democrat Senator David Leyonhjelm was confronted by protesters from the Flat Earth Institute this morning as he turned up to a hearing for the Senate Inquiry into Wind Turbines. Leyonhjelm told the pair to “fuck off” and they asked if he would “come frack with them”. When the Senator was challenged about the incident on Twitter he said that the protesters were “not citizens, but parasites”. Guessing their free speech is not so important then? 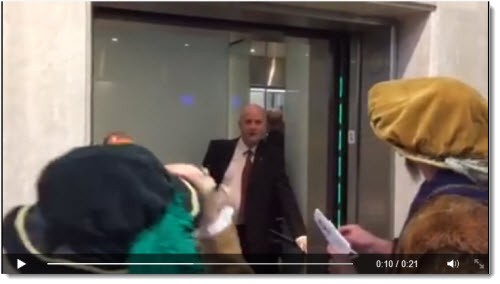 Fiery helmet headache. Waste not, want not is the name of the game at Fire and Rescue NSW according to a tipster with a tale about some fancy new helmets that have been causing some headaches for the department. Our tipster tells us that the purchasing of new lightweight helmets has been a debacle:

“The new light weight helmets can have a protective visor attached to them but it costs around $46 per helmet. While every firefighter is issued with the helmet the management decided, in order to save money, to only purchase 2 visors per fire engine so that firefighters engaged in activities requiring eye protection could use those for their personal helmet even though most fire engines are staffed with a minimum of 4 firefighters. The company supplying the helmets offered to supply all firefighters with a visor for their personal helmet if FRNSW purchased them all at once for $5 each visor, a $41 discount. Management said no and the offer lapsed. Since then FRNSW has changed its mind about supplying a visor for each helmet and must now purchase them at the original $46 price tag. This is the latest in a range of supremely negli gent supply problems and waste.”

We understand that the helmets themselves have actually been quite popular, but the bungle with the visors is a symptom of the bureacratic way the department is being run, says our tipster. “These people introduced a whole range of ‘accountability’ and cost saving measures including things like allocating a certain amount of toilet paper each station was allowed to order each month or introducing fuel purchasing cards that were not valid for the supply of petrol for the petrol driven pumps, generators and tools carried on fire engines because they didn’t know, and didn’t ask the firies, what was needed.”

We asked Fire and Rescue NSW what had happened with the helmets and the visors — and what it had cost — and received this response from a spokesperson:

“Fire & Rescue NSW (FRNSW) purchased the additional visors for rescue fire trucks only (approximately 400 in total). This was on top of the protective eyewear and hearing protection firefighters already have. Although firefighters are individually provided with safety goggles and ear muffs, it was decided that the visors would be provided as a back-up safety measure, should their individual personal protective equipment (PPE) be damaged or compromised.

FRNSW was offered a $5 discount off the price of the visors, which we took up from the supplier.”

The spokesperson said that FRNSW is rolling out two types of helmets this year, a firefighting helmet and multipurpose helmet for other incidents.

New minor party alliance. A host of progressive minor parties have announced that they are forming an alliance in order to try to get at least one of their number elected at the next federal election. The group, led by the Future Party and the Australian Progressives, will work together on campaigns and preferences and in true Australian fashion, Future Party leader James Jansson says the idea was first discussed over a beer. In a statement yesterday Jansson said: “The preference agreements in this group will absolutely change the voting landscape in Australia. The aim is to keep votes tallying up within this group as long as possible to elect parties that are similar in vision. The alliance ensures that those on the progressive side of politics are much more likely to be elected than previously under Glenn Druery’s Minor Party Alliance.” Jansson said today that many progressive parties hadn’t been part of preference whisprerer Glenn Druery’s deals at the last federal election as they didn’t want to preference some right-wing parties. Jansson said this wasn’t the same as the parties combining, as many parties in the alliance had many different interests, but that they were ready to work together. Will be interesting to see if the idea gains traction.

Beautiful one day … There are some beats that journalists love, but some present more challenges than others. Today we feel for Channel Nine reporter Alex Bernhardt, who reports from Caboolture, north of Brisbane. When Bernhardt was reporting from outside the local courthouse yesterday morning, a 23-year-old woman used Bernhardt’s cheek to put out her cigarette. A tipster tells us the incident is “very Caboolture”. Nine is reporting that the woman has been charged over the incident. 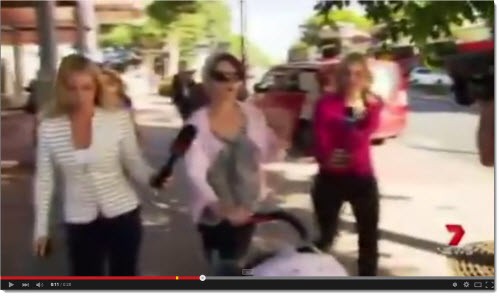 Time to get bidding. The Midwinter Ball is next week, which means that the annual charity auction items have been announced and bidding has (tentatively) begun. The overwhelmingly popular item so far has been “A foreign affair to remember“, the chance to fly business class to New York for dinner with Hugh Jackman, Deborah-Lee Furness and Julie Bishop. Bids are already up to $11,111 from a starting point of $10,000 to see Wolverine in the flesh. The dinner is just one of 11 items on offer, which include meals with the Prime Minister, the Communications Minister or a front-row seat to a sparring match between Christopher Pyne and Anthony Albanese (the date for that one is pencilled in as “next Tuesday”). Ms Tips is particularly keen on the more sporting occasions to be bid on. Greens leader Richard Di Natale is auctioning a VIP footy package and dinner to see Richmond play the Gold Coast Suns, and independent Senator Glenn Lazarus is offering the chance to watch the Canberra Raiders from the comfort of a corporate box, as well as signed legacy jerseys. Bidding has been slow to get started across the board — but you’ve got a week to scrape your spare change together.

Caption Competition. Some of the world’s most powerful leaders gathered in Southern Germany yesterday for the G7 Summit, where items on the agenda included climate change and the crisis in Ukraine, but US President Barack Obama and his counterpart German Chancellor Angela Merkel managed to get some time out to enjoy the view of the Bavarian Alps. A snapper managed to get this gem of the pair, in which it looks like Merkel is auditioning for The Sound of Music. Others have said she could be explaining the ¯\_(ツ)_/¯ emoji, or talking about the haul from her last fishing trip. What do you think Merkel is explaining to Obama? Let us know in the comments. 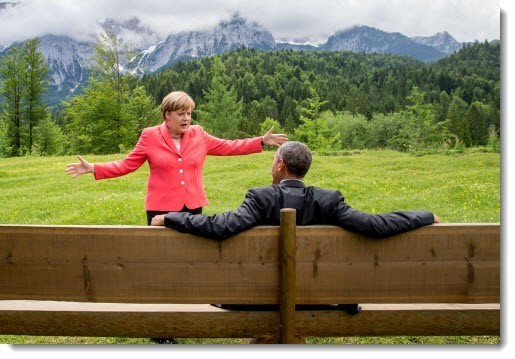 From the mouths of babes. The AFL has long been wary of the way soccer is creeping in to the hearts and minds of Australia’s youth, but now we have proof that the world game is well and truly encroaching on Aussie rules’ territory. In his press conference announcing his retirement this morning, Carlton footballer Chris Judd was asked about his children’s reaction to the news. When told that his dad would no longer be playing footy anymore, Oscar Judd reportedly said “I think you should play soccer”.

Jumbled message. A tipster noticed this awkward placement of an advertisement and a headline on Ninemsn on Friday that looked like it was celebrating the death of Alan Bond … 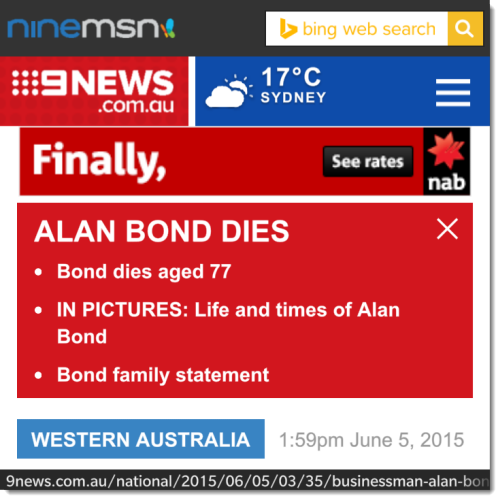 …the Gteek debt is getting sooooo big!

Re caption competition: “It started out as a little lie, but now Ukraine is this big a problem”.

“You got the NSA, where your spooks tap our calls?
If I had a knife right now, I’d remove both your balls.
I am never sittin’ on your Facebook again ….”
(Apologies to Doc Neeson and the Brewsters)

” How can you sit there like that. We are all in the Shizen, including you!!”