‘The end of the Middle East’: with IS closing in, Jordan on the brink

Jordan shares land borders with Syria and Iraq and is struggling to deal with the war. But things might get even worse if the Islamic State decides to try to expand its caliphate, writes freelance journalist Tim Robertson. 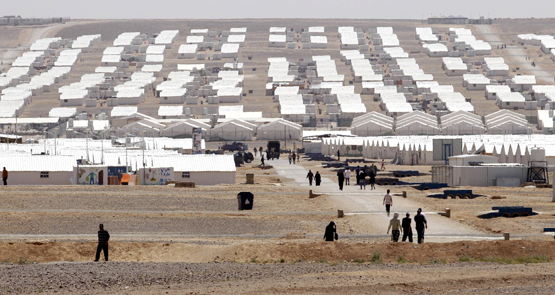 Syrian refugees walk towards a refugee camp in Jordan

Sitting under the shade of a Bedouin camp in the desert, south of the ancient city of Petra, Ahmed is explaining to me what it would mean if the Islamic State (IS) — Daesh in Arabic — were able to gain a foothold in Jordan. “It would mean the end of the Middle East,” he said in perfect English.

This seems a rather arbitrary measure and, I put to him. Isn’t the Middle East — that great Western construct — already shattered? IS has bulldozed the Sykes-Picot border between Iraq and Syria, and fighters are coming from across the world to fight, not for their country, but for a supposed caliphate.

But Jordan, Ahmed explains, is very different from its two war-ravaged neighbours: if IS manages to establish itself in Jordan and operate with even a fraction of the effectiveness it has in Iraq or Syria, it would represent an evolution in the organisation that would make a mockery of all the talk in the West that the threat has been contained.

Jordan — an almost exclusively Sunni country — doesn’t have the problems with sectarianism that IS has been so adroit at exploiting. Ahmed, always careful not to seem sympathetic to the group’s cause, reveals his own prejudices when he places the blame for the problems in the region exclusively with Iran and Russia. “If they stopped supplying the weapons to Assad, then the war would be over.” And, just in case I didn’t grasp the full meaning of this, his brother, who until now has sat silently, chimed in with: “Wherever there’s Shias, there’s problems.”

But the threat facing Jordan is different from that which has crippled Iraq and Syria: the Hashemite Kingdom may see fighting on its Syrian border before long, but, at the moment, its biggest concern is maintaining internal security. The government is dealing with growing sympathy for IS in some parts of the country and the problem of what to do with returning fighters.

Per capita, Jordan has the highest number of foreign fighters in Syria. It’s estimated that over 2000 fighters have already arrived in Syria, of which around 1300 have joined IS and more than 250 have been killed.

Those returning present a challenge for the government: if they are treated too harshly, they will stay away, which means they will remain outside a space not easily monitored. There’s also a risk that they might be viewed with some sympathy, which could be used as a recruiting tool for Islamists keen to present the government as caring more about appeasing America (and, so the equation always goes in the Middle East, Israel) than its own people. But if they’re too lenient, the fear is that the Islamists will return in droves and they will overwhelm the government.

In the city of Ma’an, about 200 kilometres south of Amman, there seems to be growing support for IS: the group’s black flag has been seen flying in the town, and walls are covered with graffiti expressing anger with the royal family and support for IS. The city has essentially been quarantined, with a large security presence watching who goes in and who leaves.

Ma’an is also significant because it represents a shift for Jordanian Salafists, who have traditionally supported al-Qaeda and its related groups. But they are increasingly being drawn towards IS. Al-Monitor journalist and expert in Salafi groups Tamer al-Samadi estimates that around 85% of the jihadist community in Jordan now supports IS. They have also been successful in winning over fighters who initially joined the al-Qaeda-affiliated Jabhat al-Nusra in Syria.

This is, in part, a reflection of the demographic changes in Jordan, with younger people drawn to the internet-savvy Islamic State.

Zarqa — long considered the centre of Jordanian jihadism and the hometown of Abu Musab al-Zarqawi, the former leader of al-Qaeda in Iraq who was killed in 2006 and is considered by many to be the spiritual leader of IS — lies adjacent to Rusaifa, two cities that are potential tinderboxes for violent extremism. These impoverished towns with young populations — in 2010, 68% of Rusaifa’s residents were under 25 — are just the most extreme examples of problems afflicting the whole country.

The conditions and circumstances that create disillusionment among the population and drive people towards terrorist groups like IS are becoming more difficult for the Jordanian government to manage. With the country’s economy slowing — investments have fallen from $3.1 billion in 2006 to $1.5 billion in the last four years — and unemployment rising (now at 22.1% in large urban centres), the government needs external assistance, which, inevitably, comes from its Western allies and, although the government denies it, Israel. This only exacerbates the anger of those within the country who see Jordan’s good relations with these “infidels” as a betrayal of other Muslims throughout the region.

Last month, Jordan closed its last land border with Syria, which not only ended exports to its neighbour but also blocked a transit route to Lebanese, Turkish and European markets.

The government is also struggling to deal with all the refugees; there are an estimated 1.4 million Syrian refugees in the country (only 630,000 are registered with the UN, and some say the number could well be higher). Then there’s Iraqis fleeing IS, registered at 30,000 but again thought to be a lot higher, those who fled the second Gulf War (more than 10% of the population) and more than 2 million Palestinian refugees. Add this to rising unemployment, and you get a growing sense of ill will towards the Syrian and Iraqi refugees. Although Jordan isn’t blighted by a Sunni-Shia divide, there has long been tension between the Jordanian and Palestinian populations. Compassion has to be a finite value in the Middle East, if one doesn’t want to be paralysed by despair.

In one respect, these complaints — about refugees, the state of the economy, the royal family — are a good sign for Jordan; it means that national security is not at the forefront of most ordinary peoples’ minds. But last week the military shot and killed a number of militants who were attempting to smuggle weapons and drugs — hashish, but also more than 6 million Captagon pills, an amphetamine militants use to allow them to fight for longer — from Syria into Jordan. And things might be about to get even tougher to manage for those posted on this border.

With the Islamic State’s decisive capture of Palmyra, the concern is that it will now focus its attention on capturing Daraa, a city just north of Jordan’s border with Syria. This provincial city has been a stronghold of rebel groups fighting against the Assad regime, but IS is now reportedly advancing towards Sweida, the capital of the province west of Daraa.

Sweida is a majority Druze city and has remained loyal to the regime throughout the civil war. But, according to The Jerusalem Post, Assad has withdrawn his troops and left Sweida largely undefended against the Islamic State. People are fleeing, fearing that an attack is imminent and frightened of the carnage IS would commit against a people it sees as apostates and regime loyalists. If IS takes the reportedly exposed Sweida and moves on to successfully defeat the rebels in Daraa, then there’ll just be desert between them and Jordan.

But before Jordan has to battle it out with the Islamic State in the war — as Ahmed might put it — to “end the Middle East”, it will face a number of seemingly less significant challenges and skirmishes. Until now, IS has flourished in failed states, but if its to fulfil its expansionist agenda to establish a caliphate on the rest of the world, there will have to come a time when it has to turn its guns on established governments with armies that will presumably stay and fight. Jordan may well be that first frontier.

As Iraq collapses, where will Syrian refugees go?

An ‘apocalyptic death cult’? What IS really wants

Interesting, thanks, look forward to next update. I wonder how Israel feels about the growing genie that their friends friends let out of the bottle. Surely it has occurred to them that their friends in the West benefit from having a sacrificial goat staked out in the region of the ‘greatest material prize in world history”.