Bernard Keane discusses the future of information security. And other media tidbits of the day.

Bernard Keane on surveillance. Some years ago, I wrote an e-book called War On The Internet and, in retrospect, it was a work of extraordinary optimism, because it suggested that history told us that eventually the corporate and government elites who felt so threatened by the internet and the possibilities for connectedness that it offered citizens would eventually accept that their capacity to control it was limited.

There’s a certain quaint naivety to that view that’s almost charming, in retrospect.

What’s happened in the last three years? Chelsea Manning, John Kiriakou and other whistleblowers have been convicted and jailed for revealing US war crimes and CIA torture.

We’ve learnt from Edward Snowden, whose first revelations emerged two years ago, of global-scale internet and phone surveillance, undermining of internet security and suborning of the world’s largest IT companies by the NSA and Five Eyes intelligence agencies.

We’ve learnt not merely that the Australian Signals Directorate spied on the Indonesian president but on Indonesian trade negotiators engaged in a trade dispute with the US, with the information handed over to US authorities to be used by industry. Although, according to the Prime Minister, Australia doesn’t engage in commercial espionage. — Click here to read the rest of Bernard Keane’s speech at the 2015 AusCERT information security conference.

Press Council smacks down the Oz. The Press Council has found that two articles published in The Australian were unfair in their criticism of the National Electrical Communications Association.

In the first article, The Australian claimed that the NECA did a “dirty deal” in its push for an association/union agreement. It reads:

“In the 2012-13 year, the association received ­secret commissions of almost $330,000 for pushing its members — business owners — into a union enterprise bargaining agreement.

“The [National Electrical Communications] association sold out its members and did a deal with the union that would see these businesses across Victoria forced into a terrible ‘pattern’ EBA.”

In the second article, the Oz makes further claims suggesting improper action taken by the NECA:

“Membership revenue has plum­meted, but the money is still ­pouring in. Where is this money coming from? I will tell you where. The business community, assisted by some employer groups who have their own snouts in the trough.

“The Victorian branch of the National Electrical and Communications Association is one such employer group. It should be sued by its members and deregistered …”

The NECA complained to the Press Council, claiming that “the articles were inaccurate and misleading in saying that the NECA ‘received secret commissions’ and had ‘forced’ or ‘pushed’ members in to a ‘union enterprise bargaining agreement’ (EBA) or a ‘pattern’ EBA”.

The Oz argued that both articles were opinion pieces, and that the statements concerning the NECA’s actions were the author’s own opinion.

The Press Council’s verdict sided with the NECA. The Press Council said that “the statement in the first article that NECA had ‘forced’ its members into pattern EBAs was not an accurate reflection of NECA’s business practice”.

The Press Council noted that the articles were opinion pieces, but continued to say that the article “lacked fairness and balance in omitting to state that the payments [received by NECA] were in fact disclosed in NECA’s accounts.”

Finally, the council concluded that “reasonable steps were not taken to provide a published response from NECA or other adequate remedial action” and for these reasons, the NECA’s complaints were upheld. —  Crikey intern Bransen Gibson

Sun King stumbles. With News Corp Australia poised to announce a change of leadership shortly (with Michael Miller, the current CEO of APN News and Media and former News exec, now in the lead over Ten executive chair Hamish McLennan), attention is naturally focused down in Australia for watchers of the affairs of the Murdoch clan. But I would be keeping a weather eye on the UK business, where there are some disturbing revenue and circulation patterns emerging that show Britons are going off the core Murdoch idea of tabloid journalism. It’s a slow rejection that could spark a Murdoch visit, and perhaps a management shake-up (would that get Rebekah Brooks back in the top gig in the UK?)

In fact, the May circulation and the 2014-15 readership figures show the Murdoch empire is rapidly becoming an also-ran, behind the resurgent Daily Mail and General Trust group (controlled by the Harmsworth family, Britain’s media royal family — peerage created in 1919).

Not only is the Mail Online the world’s biggest news website (and free, much to the chagrin of the moaning Murdochs and their media courtiers), it is now clear UK newspaper readers are increasingly preferring the Daily Mail and the Mail on Sunday over The Sun and The Sunday Sun. And to rub it in, they did it in the election month of May and its dramatic aftermath.

In its heyday, The Sun was the paper of working-class aspiration. Now the Mail embodies the next step in that process. British newspapers, even in this digital age, remain social-class badges. Maybe, and I agree this is more tentative, it also shows the virtue of having a free-to-access website. Mail Online complements its two newsprint platforms, reinforcing the strength of the brand.  By contrast, The Sun’s hard paywall turns people away to the Mail’s populist website and that draws them towards the newsprint Mail as well. Not sure of that. Just thinking out loud, really.

Anyway, the central substantive fact is beyond doubt. The Daily Mail and Mail on Sunday are on their way to being the best-selling newsprint newspaper titles in Britain. Rupert Murdoch is ceding power to Viscount Rothermere. — Glenn Dyer

Nine takes a hit. If a politician or government had dropped a big news story at 4.33pm on the Friday ahead of a long weekend holiday, Nine’s journalists would have been critical — and rightly so. But for the parent? A different story completely, as it lodged a surprise downgrade at 4.33pm with the ASX last Friday ahead of the Queens’s birthday holiday weekend. Instead of the shares copping a bashing from nervy investors, the management and board went off for a long weekend and a chat to major shareholders to keep them sweet.

But the bottom line is that, with its earnings downgrade, Nine joins free-to-air rivals Seven West Media and Ten Network, which have both been hit in 2014-15 from weak ad growth and ratings, which are falling in many cases. Seven and Ten have both also taken impairment charges this year, will Nine be forced to follow? Nine shares closed at $1.99 on Friday, below their issue price of $2.05 when the company listed in December 2013.

Nine now expects earnings before interest, tax, depreciation and amortisation to come in between $285 million and $290 million, down from $311 million the previous year. The company had previously said it expected earnings for the year to June to be “at least in line with” the previous year.

What the Nine statement tells us is that the first 2015 series of The Block and the network’s cobbled-together spoiler, Reno Rumble, have failed to drag in enough advertising, or rather the amount of advertising Nine thought they would. So it wouldn’t surprise if Nine has been forced to give free ads (called make goods in the trade) to advertisers to compensate them for the weaker than forecast ratings. if that’s the case, then the justification for inventing Reno Rumble and using it as a spoiler against Seven’s House Rules has more than backfired — it’s an own goal for CEO, David Gyngell. — Glenn Dyer

Front page of the day. At Crikey, we understand the value of incorporating “light and shade” into news coverage. But the Herald Sun has stretched juxtaposition to its limits by sandwiching this crotch shot of Sam Newman in a mankini between two truly tragic stories. 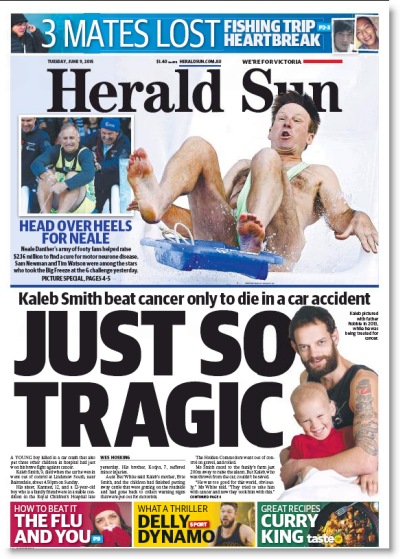 “Opinion pieces”? Isn’t that all Limited News is?

Take a look at their PCPs re “Accuracy”?

Re the UK press being class badges, I have always wondered how the people who ‘take’ the Daily EXPRESS describe themselves.
Even Mr Pooter wouldn’t wipe his cat’s bum with it.