What the Defence budget costs the average Joe

As Defence officials front estimates today to explain the value for money of Australia's military spending, accountant Steven Green looked at what it really means for the average Australian.

The average Australian works 10 days a year to pay for the defence of the country, and the government’s commitment to boost Defence spending to 2% of GDP will increase this to 14 days.

The average Australian taxpayer is 37.3 years old and earns $80,205 a year, paying $16,816 in income tax, plus a further $9918 in GST, duties and other taxes. Knowing this, how expensive are the Australian Defence Force to the average taxpayer? Let’s call him Joe.

It is expensive, roughly the cost of a luxury 10-day holiday to Bali. The defence of Australia costs Joe $2256 a year, which is 10 days of Joe’s pay. Though recognising our deficit, the taxpayer’s contribution wasn’t enough this year, and the government had to borrow a further $179 on Joe’s behalf. When the first F-35A fighter jet flies over his head, Joe will have contributed $23 to its $421 million cost. Similarly, when the first $3 billion Air Warfare Destroyer sets sail, Joe will see where $161 of his tax dollars went. 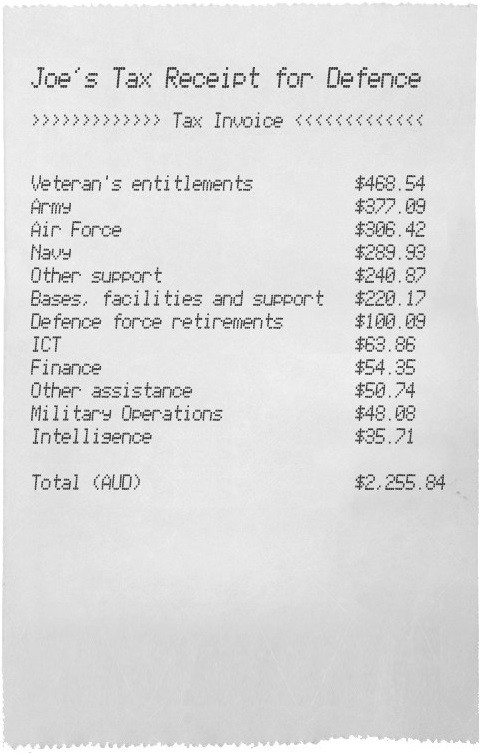 Applying this lens to last month’s budget provides much-needed context to the large numbers that get used whenever the Defence budget is discussed. The budget increase for the investment in new military equipment, from $6.3 billion in 2014-15 to $10.2 billion at the end of the forward estimates, will cost Joe $216 each year. If only Joe knew this decision, buried in the explanatory notes, cost him a degustation with matching wines at Sydney’s Momofuku Seibo, or a day’s pay. Joe is likely to be just as oblivious to the effect of the government’s commitment to increase Defence spending to 2% of GDP by 2023-24, which, when using the government’s GDP forecast, will add $17 billion to the budget in real terms, and Joe will work four days each year to fund it.

The government generally omits the cost of veteran entitlements when reporting the Defence budget, despite it being appropriated to Defence and a key consideration in an expanding military. To support the average veteran entitlement recipient for 30 years would cost close to $1.5 million in nominal dollars. Acknowledging this cost further supports the recent First Principles Review’s recommendation that uniformed personnel not perform the role of public servants.

Next year, Joe will contribute $469 to veteran entitlements, after excluding $238 in income support payments to veterans, their widows and dependents, which would ordinarily be paid by social services. This is in addition to his $8060 payment to Australia’s general welfare recipients.

Joe pays more for accountants at Defence ($54) than he does Defence Intelligence ($36). For his money Joe gets a clean set of financial statements compliant with private sector international accounting standards. Identifying the “future economic benefit” of every Defence asset as prescribed by International Financial Reporting Standards is a costly exercise. As a result, almost all other developed countries elect to use less burdensome public sector specific accounting standards. 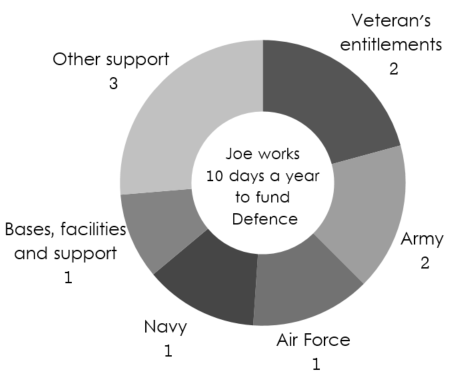 When businessmen in Martin Place see the value of a big Defence contract announced, they often ask in jest, “Can’t we just pay the Americans to defend us?” Well in fact, it turns out Joe is getting a pretty good deal on defence here in Australia. The average cost to the taxpayer of the United States defence budget is $5482 per annum. Though if Joe is looking for a better deal, he could always look next door to New Zealand ($1101 per annum). 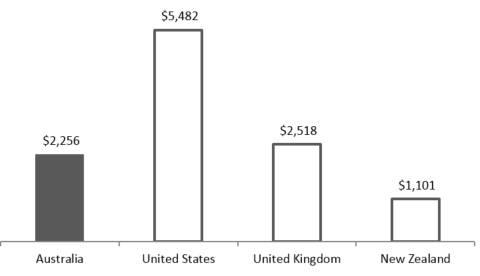 When routinely making large budget decisions it is easy for public servants, military chiefs and government to not grasp the impact to the taxpayer. Showing how many hours Joe needs to work in order to fund all new policy proposals submitted to government would be useful to those attempting to assess value for money on nine- and 10-figure policies. Just as it is a useful way for taxpayers to understand how the budget impacts them.