The Royal Commission into Institutional Responses to Child Sexual Abuse has said it will call Cardinal George Pell to front the front the commission. Freelance journalist Brihony Tulloch reports on the complicated rise of George Pell. 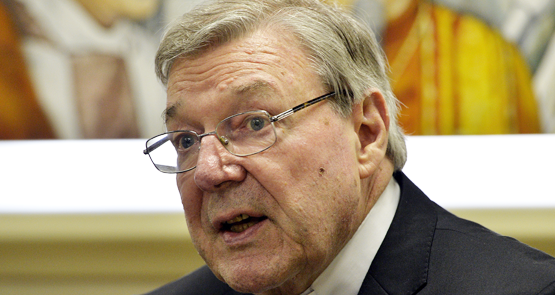 Cardinal George Pell is currently under intense media scrutiny in relation to child sexual abuse claims spanning the decades between the 1960s and 1990s, with the Royal Commission into Institutional Responses to Child Sexual Abuse saying it will call him when it resumes later this year.

It’s been alleged that Pell knew about the heinous acts being committed by priests against children during this time, and did nothing to stop it, which he vehemently denies. He’s even seeking legal advice in light of a recent critical 60 Minutes interview.

Pell has been a controversial figure for a long time, rising higher within the Catholic Church hierarchy than any Australian ever has. Let’s look at the controversies and meteoric rise of Australia’s highest-ranking Catholic.

1966: Pell becomes an ordained a priest for the Ballarat diocese in St Peter’s Basilica

Pell studied to become a priest at Corpus Christi College in Werribee and later at Propaganda Fide College in Rome. That was where he became an ordained Catholic priest for the Diocese of Ballarat by Cardinal Gregoire-Pierre Agagianian in St Peter’s Basilica.

A young student at St Alipius school in Ballarat was raped by principal and teacher Christian Brother Robert Charles Best, who is now serving 14 years and nine nine months for 27 offences relating to child sexual assault.

The boy claims that he tried to speak to Pell at the time about the abuse and Pell refused. But according to solicitor Dr Vivian Waller, who has acted as counsel for many victims of sexual assault who claim abuse by religious clergy, Pell was present when the boy told another priest about the rape.

Pell denies this, claiming that he was studying abroad at Oxford University in 1969, and couldn’t possibly have been present during the exchange.

1973: Pell is living with Gerald Ridsdale, who was later convicted of paedophilia

Pell became assistant priest at Swan Hill parish and Ballarat East. It has been recently revealed that during this time he lived with Gerald Ridsdale, a chaplain at the primary school, and who is now considered one of Australia’s most egregious child sex offenders.

Ridsdale was convicted of more than 150 offences against children, but he claims that Pell didn’t pick up on what he was doing during the 12 months that they shared the parish housings.

Emma and Katie Foster were both raped by their parish priest Father Kevin O’Donnell during the 1980s. During this time, Pell was principal of the Institute of Catholic Education.

The impact of the abuse was catastrophic. Katie took to drinking heavily, and Emma committed suicide in 2008. In 2004, the Foster family decided to bring formal charges against the Church, and were awarded $450,000 in compensation.

1982: Pell reportedly involved in the transfer of paedophile priest

Last month, the Royal Commission into Institutional Responses to Child Sexual Abuse heard claims that Pell was present at a meeting in September 1982 with three other senior clergy regarding the complaints they had received about Ridsdale’s inappropriate behaviour.

Rather than reporting him, they proceeded to move Ridsdale from Mortlake in Victoria to the Catholic Inquiry Centre in Sydney, where he would abuse another boy.

Pell denies ever knowing of Ridsdale’s offending at the time.

David Ridsdale was sexually abused by his uncle Gerald Ridsdale during the 1970s. Distraught and unsure of what to do, he called family friend George Pell in 1993 to confide in him about the abuse.

David claims that Pell, who was Auxiliary Bishop of Melbourne at the time, tried to bribe him, saying “I want to know what it will take to keep you quiet”.

Pell didn’t deny the fact that David had called him, but he was unclear about which year it happened. Pell told the the Royal Commission into Institutional Responses to Child Sexual Abuse last month that it was untrue he tried to bribe David.

This was the same year that Gerald Ridsdale was convicted of child sexual abuse. Pell was photographed supporting him throughout his trial.

While serving as Archbishop of Melbourne, Pell created the “Melbourne Response” to help deal with child sex abuse claims in the Church. Independent commissioners were appointed to investigate claims, a counselling service called Carelink was provided, as well as the opportunity to be financially compensated. However this compensation was capped at $50,000, well below the $1 million average for victims in the United States, but Pell considered this “no less generous” than any other contemporary compensation scheme in Australia. If victims went to the police, they were no longer eligible for any payment.

The system received heavy criticism at the time, and was put under review in light of claims that victims were not being treated compassionately.

After just 12 months as the new archbishop of Sydney, two altar boys accused him of sexually abusing them at a camp on Philip Island in 1961. He emphatically denies the allegations, but stood aside as archbishop until the claims are resolved.

After growing pressure for a royal commission into child abuse by the Catholic Church, Gillard announced her recommendation for a federal Royal Commission into Institutional Child Abuse, to investigate the treatment of children by both religious and non-religious institutions.

Pell was serving as archbishop of Sydney and announced his support for the commission.

2013: Pell apologises for the Church’s creation of false documents

While still acting as archbishop of Sydney, Pell was called to answer for the failings of the Catholic Church to deal with child sexual abuse.

He said it was the “fear of scandal” that led to treatment of victims during the 1970s and ’80s.

Pell was personally selected by Pope Francis to be Secretariat for the Economy, overseeing the Vatican’s annual budget and expenses. But ever since David Ridsdale’s claims that he tried to bribe him, there have been increasing calls for Pell to return to Australia and explain himself at the royal commission.

Why do you continue regurgitating this cobbled together manage of nonsense in which almost anything goes? Having the odd piece of factually correct trivial information doesn’t act as some sort of non-theistic Holy Water to bless the article as a whole. Unsubstantiated 3rd hand hearsay has never been deemed a sound basis for informed articles.
On the other hand, I guess that while regurgitating pieces to the point [as with this one] even your devoted acolytes can’t find anything to say, at least helps pad spaces?

Norman Hanscombe, it’s pretty rich to describe a long list of George Pell’s denials as a “manage of nonsense”, whatever you believe to be the meaning of the word ‘manage’. Pell regards himself as some sort of celebrity so that he saw it as perfectly appropriate that he go on TV to argue with some celebrity atheist about the existence of God – as if either of them had anything constructive to say. Yet he admits ignorance of the perversions of his room mates, blindness to the openly admitted terrorising of children in his pastoral care and candidly covers up for the benefit of the Catholic Church. Surely Norman, you aren’t concerned about the church being scandalised?

Surely the point about Pell is ,what did he NOT know and when did he cease to know it?

I am not sure he can still cross open water in physical form, so appearing before the Royal Commission might be tricky.

Given the vastness of the offending, the breadth that Cardinal Boy George operated within the church, it is inconceivable that he didn’t know more than he has let on.