The Australian Financial Review missed it and The Australian only managed to produce this piece online, but at least the Herald Sun was able to come up with a lead in print today, which attempted to seriously cover the conclusion of NAB’s record-breaking $5.5 billion capital raising.

However, the newspaper coverage once again demonstrates how Australian business journalism fundamentally under-reports or misreports the issue of how retail shareholders are treated in capital raisings.

Given there are 500,000 NAB shareholders involved, it seems strange that they don’t get any decent journalism service on the various issues arising from the share offer.

The Herald Sun headline (not available online) was “Cash call falls short”, and the opening paragraph suggested some sort of disappointment or trouble for the bank after it was “forced to launch another share offering after falling short with its push to raise $5.5 billion from a rights issue”. 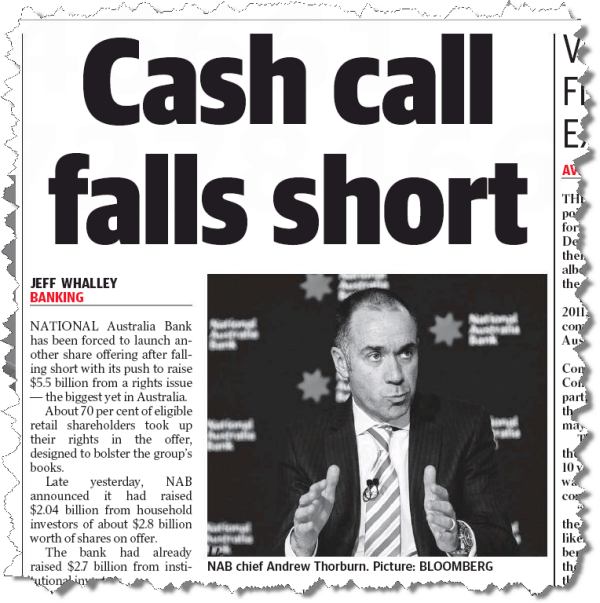 But the offer was renounceable, and we all knew that not all the 500,000 eligible NAB shareholders would take up their rights to buy two new shares at $28.50 for each 25 shares currently held.

The real story was the very strong demand from NAB’s retail base as 72% (or $2.04 billion) of the $2.8 billion retail offer was either taken up by the 265,000 applicants. Never before has a non-IPO pro-rata capital raising in Australia generated more than $2 billion in acceptances from retail investors, yet the Herald Sun is suggesting it flopped.

Thanks to the excellent structure of the offer, the 235,000 NAB shareholders who chose not to participate were either able to exit by selling their rights on market or in last night’s retail shortfall bookbuild.

Despite strong participation from retail, the shortfall bookbuild was also a record for the Australian market as institutions collectively agreed to pay $900.6 million for the 28.5 million new shares, which were left on the table by about 200,000 small shareholders.

The clearing price on these $28.50 shares was announced this morning at $31.60, meaning the non-participants will receive $3.10 for each renounced right.

Unfortunately, this was significantly below the $5.30 in compensation that non-participating institutions received from their earlier bookbuild of about $100 million worth of renounced rights.

However, the difference can be explained by the substantial fall in the broader market between the institutional and retail bookbuild shortfalls. That was just bad luck for retail.

But this is where NAB’s decision to go for a PAITREO structure (Pro-rata Accelerated Institutional Tradeable Retail Entitlement Offer) meant the result wasn’t so bad for retail investors.

Only NAB’s retail shareholders were given a two-week opportunity to sell their rights on market. Rights-trading equated to about 16% of the 98 million new shares that retail investors were collectively offered. Those who exited on-market fetched an average price of $5.35 for each right, which was just above the $5.30 paid to non-participating institutions.

All of this demonstrates how and why Slater and Gordon — advised by Macquarie and Citi — got its recent $890 million capital raising so wrong by denying their retail investors the chance to sell out on market.

There is plenty of evidence available on the inferior outcomes delivered to retail investors when companies run separate bookbuilds with no market trading.

There has now been 12 PAITREO offers since Merrill Lynch pioneered the new model with Origin Energy’s $2.3 billion rights issue in 2011.

The score board is now sitting 4-4-4 in terms of who got of the better of the deal between the two classes of shareholders.

NAB has joined Brambles, ASX and AGL’s 2014 offer in delivering a better outcome for institutions in terms of the bookbuild price.

In the case of ALS, Arrium, Bluescope and Goodman Fielder, the compensation was the same.

The facts are pretty clear from all this. The fairest way to raise new capital is through a PAITREO, and any board that opts for something different is not respecting either the property rights of all investors or the interests of their retail shareholders.

Retail shareholders are chronic non-participants in attractive capital raisings offers, especially if the stock has performed badly or if there are accidental shareholders such as from a demutualisation or a demerger.

Look no further than the old NRMA, now trading as IAG, which offered an in-the-money $15,000 share purchase plan last year that only 5% of their shareholders took up.

Knowing this, it is incumbent on boards to structure raisings that fairly compensate non-participating retail investors, otherwise we’ll just continue to see small investors getting diluted out of huge value by the big end of town.

Perhaps some retail shareholders in iag still remember the last great cap raising a few years back @ $6.63….don’t think the price has ever risen above that since.