Why you won’t find the frontier wars at the War Memorial. Should Australia’s frontier wars — which resulted in Aboriginal people being dispossessed of their land and, often, far worse than that — be acknowledged and commemorated at the Australian War Memorial? That was the question independent Senator Nick Xenophon asked of the AWM at an estimates hearing on Tuesday night, arguing that the frontier wars were taught at the Australian Defence Force Academy. To his credit, AWM chief Brendan Nelson didn’t duck the question or take it on notice. His answer is, we think, worth quoting at length.

Nelson starts with the origin of the AWM, with Charles Bean, who after WWI wanted to “build at the war’s end the finest memorial and museum to these men of the AIF and the nurses. They are the origins of the memorial. Its charter, its mission and then its act govern the memorial to tell the story of the Australian experience of war — Australians’ experience on active service. The act was amended in 1941 to include the Second World War. It was then amended again in the 1950s to include other wars and overseas active service.” Nelson then goes on to say:

“The relationship between indigenous and non-indigenous Australians is not that of the North American Indians. Our experience is not even that of New Zealand. It was a very rich and diverse relationship, from episodes of extraordinary beneficence and kindness from indigenous to non-indigenous and vice versa at one end to extreme acts of brutality, violence and massacre at the other. But, from the Australian War Memorial’s perspective, that story needs to be told in the context of the full relationship. It needs to be told at the National Museum of Australia. Its director, my counterpart Matt Trinker, has agreed that that is the case, and the National Museum of Australia will present that. In a practical sense, by the way, we are not of the view that there was such a thing as a declared war against indigenous Australians. After the British garrisons left, where the violence occurred it was conducted by police militia, some pastoral militia and mounted Aboriginal militia. Also, from our point of view, the strength of what we do at the memorial — and Senator Back referred to it in his introductory remarks — is our collection: the things that we actually have. Even if the War Memorial were of the view that it should be telling the stories of armed conflict, we do not have any collection to do it. Where it is held, it is held by state museums, British museums and the National Museum of Australia. If the Australian War Memorial were to go into telling these stories, I suspect we would have to also be telling the stories, as the Canadian War Museum does, of the armed conflict and violence between Aboriginal tribes themselves prior to the arrival of the First Fleet and all the devastating consequences that would have for Aboriginal people. Finally, the indigenous servicemen and veterans association of Australia is itself totally opposed to the presentation of this armed conflict between indigenous peoples and Europeans and pastoralists through the 19th and early 20th centuries at the Australian War Memorial.”

What do you think? You can let us know here.

Abbott comes second in poll. Politics is not a career choice for those who want to be popular, and if Prime Minister Tony Abbott needed any reminder of that, he got it yesterday with the release of The Encore Score‘s 10 most and least popular Australians. Abbott didn’t take out top place in either list, but came second in the list of people Australians aren’t so keen on, losing out on the coveted “most hated” position to former entertainer Rolf Harris, who was convicted of indecent assault last year. Clive Palmer, Joe Hockey and Pauline Hanson are the other pollies that find themselves in the least popular list, along with Kyle Sandilands and Ben Cousins. No pollies made it to the top 10 most-popular list, which is the domain of actors, entertainers and comedians.

Moving to the beat. Ms Tips loves the insight we get into the lives of our politicians from Twitter, whether it’s Philip Ruddock’s FitBit updates (he’s doing pretty well), or photos of David Leyonhjelm’s cats, it’s all in good fun. Today, Queensland Labor MP Graham Perrett shared the best of his playlist from his morning walk, and it’s quite the list, with everything from Public Enemy to Regina Spektor. Maybe Perrett should challenge DJ Albo to a deck-spinning duel?

A man’s house is his castle. A caller to 3AW this morning revealed that not a single person has applied to get his or her house back after the Victorian government compulsorily acquired them in order to build the East West Link. Ms Tips isn’t surprised by this — with the federal government still pledging money towards the project and the Victorian opposition keeping the road as policy, we wouldn’t be expecting to get our house back any time soon, either.

How does a reasonable chicken dance? Queensland Senator Matthew Canavan seems to have taken a leaf out of Agriculture Minister Barnaby Joyce’s book, holding an animal-themed press conference with more puns than you can peck at. Canavan is asking the ACCC to get in the mind of a “reasonable chicken” (not unreasonable ones) in order to work out the best way to define free-range eggs. We particularly liked this mash-up, which appeared on ABC News, although it’s not the chicken dance we’re used to being busted out at many weddings. 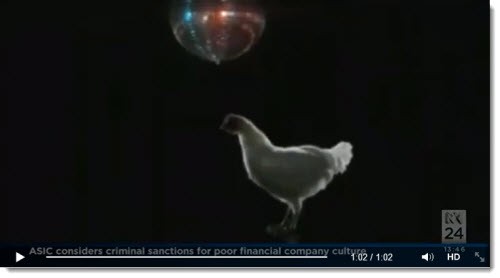 Easy for Canavan to say – a cock’s got a head start.