China has no regard for human rights. And mealy-mouthed language from Australian politicians isn't good enough. 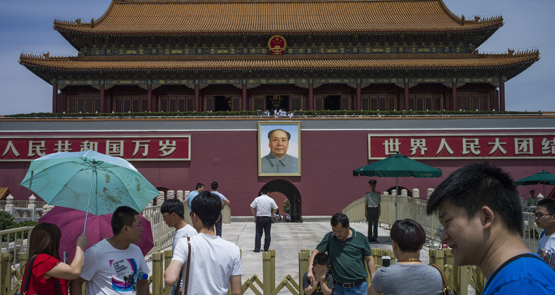 The month or so leading up to June 4, the anniversary of the 1989 Tiananmen Square massacre, is generally showtime for the always-bubbling tension between Chinese authorities and the dissidents and activists in the country, who seek more freedom for themselves and their countrymen.

In any given year, hundreds of dissidents or activists — in Beijing in particular, but also across the country — are placed under various forms of house arrest. It’s like an annual shadow play. Then, when it’s all over, both sides can go back to whatever passes for normality in Communist China: dissidents and activists treading just inside a well-worn and understood set of boundaries, occasionally testing those boundaries.

Last year, a number of very prominent activists were not particularly testing the boundaries in a series of meetings aimed at deciding what to do to commemorate the 25th anniversary of the 1989 massacre. One in particular, prominent lawyer Pu Zhiqiang, had played at the edge of the boundary for a long time. On May 4 last year, he was detained. He has not been released, and on May 15 this year he was charged with inciting ethnic hatred and also “picking quarrels and provoking trouble” — a charge that would be funny if it weren’t so serious. The two charges together hold a prospective sentence of 10 years in jail.

Supreme leader Xi Jinping’s China is rapidly emerging as the most repressive regime since Deng Xiaoping crushed student protests with tanks and AK-47s 26 years ago, according to long-time China watchers.

This year, on May 5, the Chinese government announced its new National Security Law as well as the Foreign Non-Governmental Organizations Management Law. There are widespread concerns about the new legislation and it seems that journalists and non-government organisations and now very much the targets of the Chinese government’s formidable security apparatus.

Following the Tiananmen Square massacre, a tearful Bob Hawke — then at the height of his power and popularity as Australian prime minister — made an extraordinary offer that any Chinese students in Australia at the time could settle here permanently.

It was a signal move and one that caused diplomatic tension between the  two countries. After a while, those tensions dissipated, and Hawke has made a motza out of his business relationships in China since then.

This week, we had the slightly unedifying sight of one of Hawke’s successors, Labor’s Deputy Leader Tanya Plibersek, bleating that the Abbott government needed to be careful not to use “inflammatory” language towards China, as the latter executes a plan to expand its territory in the South China Sea and so extend its influence around the region. She said Australia should try to “de-escalate” (dreadful non-word) the situation in the South China Sea. (Given it’s a situation created solely by China, the chances of that are somewhere around zero.) Her message was clear, Australia should pussyfoot around China. But why?

China has shown, in recent years, that it is keen to increase, rather than reduce, investment in Australia despite us strengthening our alliance with the US and, more latterly, Japan. It’s hard to see what Plibersek’s problem is.

Given her commentary, it’s unlikely we will hear anything from Labor today that supports or commemorates Hawke’s moves 26 years ago or that addresses the still appalling human rights situation in China.

Talk to Australian diplomats and they will tell you not to worry, that Australia now has an annual “human rights dialogue” with China where we can raise issues like Pu and other activists locked up for trying to better the treatment of their countrymen. At this “dialogue”, Australia is also permitted by China to raise the shocking treatment of Australians in Chinese detention centres and jails, where they don’t see sunlight and are allowed just one consular visit and one family visit each month.

There are now 70 Australians detained or jailed in China — a number that has almost doubled in the past five years. One Australian citizen, Peter Gardner, is awaiting sentencing for drug smuggling. He faces the death sentence. The Australian government refuses to say a word because Gardner, a dual citizen, travelled to China on a New Zealand passport. Yet the Kiwis have been similarly mute.

Restricting Australia’s human rights concerns about China to a once-a-year event is exactly how China wants it: locked away in a nice little box. It happens each year, and each year nothing changes.

An indication of just how much nothing changes in China (once the government paints a target on your back) was brought home this week with a long list released of activists from 1989 — including Nobel Peace Prize laureate Liu Xiaobo — who are still under lock and key in China right now.

When Pu was formally arrested in July last year, Julie Bishop spoke out against the move, noting that “China doesn’t respect weakness”. She is right. Yet one suspects that, despite admirably tough language at the weekend from Australia about China’s aggression in the South China Sea, the silence from Canberra today on human rights in China, on the most appropriate day of the year for them, will be deafening.