Andrew Bolt gives the Peel Hotel in Collingwood, Victoria, a big thumbs up. And other media tidbits of the day.

An endorsement for the ages. Melbourne gay institution the Peel Hotel has an endorsement from an unlikely source, after Andrew Bolt described it as an “excellent” establishment on his blog yesterday.

His comment was prompted by Peel owner Tom McFeely, who wrote to Bolt to explain his thoroughly conservative reasons for wanting to marry his long-term partner.

“In my view more and more gay people are forming committed relationships. I am witnessing a decline in patronage of those who are out for the night looking to ‘pick up’, and an increase in patronage by couples. We are also seeing more ‘wedding’ parties booking space at The Peel. As an old fashioned traditionalist I am pleased.”

McFeely, whose letter to Bolt is republished on the Herald Sun website, was a Liberal candidate in the 2010 Victorian state election, so the fact that he’s a Bolt fan isn’t surprising.

Crikey‘s extensive sources within Melbourne’s gay community, however, question whether Bolt has ever patronised The Peel, given his pronouncement of its excellence. The Peel, one of Melbourne’s oldest gay bars, is a somewhat old-fashioned place that delays entry to women and those travelling with them. Because of this, and the fact that it’s a bit of a dive, it’s not exactly the most popular establishment of Melbourne’s younger, swinging gay population. Perhaps that explains the increase in wedding parties being hosted there … — Myriam Robin

Streaming goes global. The US streaming boom continues with CBS overnight revealing its new streaming service for its Showtime cable channel, and Yahoo surprising many by buying the streaming rights to an NFL match in October. The game will be played in London on October 25 between the lowly ranked Buffalo Bills and the Jacksonville Jaguars and will be free and streamed across the world on all devices. Yahoo says it will feed the match through Yahoo, Yahoo Sports, Yahoo Screen, and Tumblr. This is a first step into a global, co-ordinated, live-streaming event and will be watched by media, sports and others (e.g. advertisers) and tech companies the world over. Even if it is not very successful, it is an experiment and is sure to be followed by other games. NFL, NBA basketball, baseball, ice hockey; all lend themselves to global streaming because of their brand and sport awareness across the world. Likewise with major European based soccer competitions, such as the FA Cup, the English Premier League, the Spanish and Italian leagues, the European and Europa Cups, and of course, the World Cup. It could also be the day marking the start of the decline of free-to-air and cable TV (especially in mass sports rights). What will be interesting to see is if, in Australia, Yahoo Seven — the joint venture with Seven West Media — streams the game here.

Meanwhile CBS has revealed its much-talked-about streaming video service for its Showtime cable channel will start with a non-exclusive deal with Apple. It will be called (you guessed it) Showtime and priced at US$10.99 a month, cheaper than HBO’s exclusive streaming service with Apple at US$14.99 a month, which started in April. CBS also has its main streaming service called CBS: All Access which transmits the network programs live to air and offers a backlog of thousands of current and vintage CBS programs across more and more of the country. — Glenn Dyer

All hail Q&A. Australia has been noted as a global leader for growth in civil society well-being due to public safety, gender equality, intergroup cohesion and strong public engagement on policy due to compulsory voting and platforms like ABC’s Q&A.

The latest snapshot and recent progress report of the Boston Consulting Group’s Sustainable Economic Development Assessment, released this week, put Australia in a rarefied group of top nations that are going forward in civil society well-being. Australians not only watch and read policy debates, they participate. Campaigns to close the gap for disadvantaged groups and end inequality get wide attention in Australia. — Harley Dennett on The Mandarin

Today in depressing journalism news. Sketch writer and best-selling novelist Tom Cox has, after four years, quit his column at The Guardian. On his blog, he says clumsy subediting ruined his pieces, and anyway, he was sick of being paid less as he got better:

“The Huffington Post has always been an essentially miserable place, with a workplace culture so brutal and toxic that it would meet with approval from committed sociopaths across the land. If things are getting worse there, they have to be really, really bad.”

Video of the day. The Weekly on indigenous incarceration … 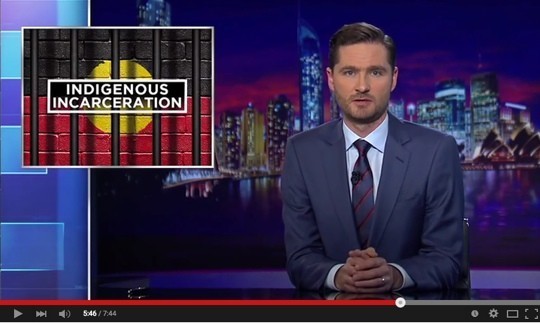 Why a link to the Mandarin when we can not view same?

Bolt’s endorsement of the Squeal Hotel is a dead giveaway that he’s never been there.