‘I’m not on the run’: Greste wants to answer his Egyptian charges

Al Jazeera journalist Peter Greste is on trial in absentia in Egypt. The problem is that by not turning up for his trial in person, he could automatically be found guilty. 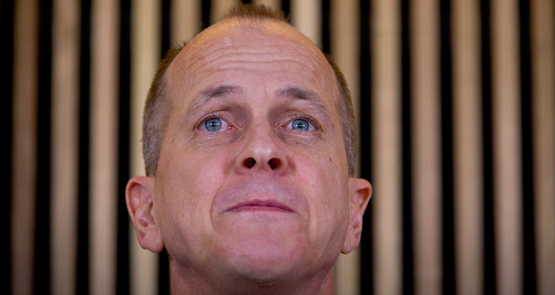 Peter Greste was hastily expelled from Egypt by presidential decree in February. His expulsion was intended to save the Egyptian government the political headache of dealing with his case, but it didn’t legally resolve the question of Greste’s charges. That means, in a few hours, Greste’s lawyer in Egypt will do all he can to ensure the Australian journalist is not found guilty of collaborating with a banned terrorist organisation and of broadcasting false news.

Under Egypt’s legal system, people who do not turn up for their trials are automatically found guilty. It’s now possible that, even should his colleagues Mohamed Fahmy and Baher Mohamed successfully argue their innocence, Greste could be found guilty.

After Egypt’s highest court ordered a retrial of the case that resulted in the Al Jazeera journalists sentenced to seven years’ jail, a retrial started on Monday. So far, Greste has not been allowed to present his case. This evening (Australian time) the defence makes its closing arguments in Cairo, and Greste is hoping the court will accept a letter from the Department of Foreign Affairs and Trade explaining why he has not been charged in Australia.

“The Egyptians have seen the lack of any Australian judicial process, so they assume nothing has happened,” Greste said. “DFAT has written to the court to say they considered my circumstances, and have judged there was no case to answer under Australian law.”

“If the courts accepts that document, there’s a chance they will strike me off the case. If that doesn’t happen, we’ll argue that because the case is so unusual, I should have the opportunity to appear via videolink.”

Videolink is not a part of the Egyptian legal system — Greste thinks he would set a precedent if the videolink is allowed. But the legal argument is that, because of Greste’s extraordinary circumstances (“I was kicked out of the country under an executive order”), a videolink might be acceptable to the Egyptian government and legal system. “I’m trying to do everything I can to make the Egyptians understand it’s not as if I’m a fugitive,” Greste said.

“I’m not on the run. We know it’s going to be difficult for the Egyptians to do it. I don’t know if they will in the end. But it’s important that they understand I’m trying to help the process, not hinder it.”

Of course, even if Greste does manage to have his testimony heard, he could still be found guilty. Greste says he and his colleagues had been very optimistic at the initial trial. Its result was a complete surprise. “There was no evidence against us, so we were very hopefully we’d be acquitted, or that we would suffer some kind of token conviction and be released under time served. We never anticipated we’d be sentenced for seven years. That completely blew us away.”

“The signs are that this particular court has handled our case with a great deal more professionalism than the last trial. That gives us some reason for hope. But we’ve also learned not to get too optimistic.”

On Monday, Fahmy, who was the Al Jazeera English Cairo bureau chief, was published in The New York Times saying Al Jazeera had put him and his bureau in danger by willfully breaking the law in Egypt.

“My anger … is not directed primarily at the prosecutor, the judiciary or the government of President Abdel Fattah el-Sisi. It is aimed at my employer, Al Jazeera,” he wrote, accusing Al Jazeera’s “noble-sounding claims” of being “nothing but a glossy whitewash”. He accuses the network of “knowingly [antagonising] the Egyptian authorities”, and of dubbing over AJE’s reports with inflammatory sentiments in Arabic when rebroadcasting them. Fahmy is suing Al Jazeera for $127 million (US$100 million).

Asked by Crikey whether he agreed with Fahmy’s criticisms of the network, Greste said although he had discussed the situation with Fahmy, he didn’t think it helped to bring up the issue now.

“The fact is we’re the ones that are on trial in Egypt,” Greste said.

“Whatever the issues that he might have with Al Jazeera, my concern is we need to deal with the charges against the three of us. The charges are very specifically against us, not against our employer. We’re the ones accused of collaborating with a banned terrorist organisation, we’re the ones accused of broadcasting false news. That’s what we really need to focus on.”

While closing arguments will take place this evening, a verdict is not expected for some months.

If nothing else, I guess this provides valuable Greste for the Crikey Rumour Mill?