Hang on a sec, Joe: GDP numbers not as terrific as you think

The Treasurer has trumpeted yesterday's GDP figures as a "terrific" sign for the Australian economy. But freelance journalist Alan Austin says he has missed some crucial comparisons. 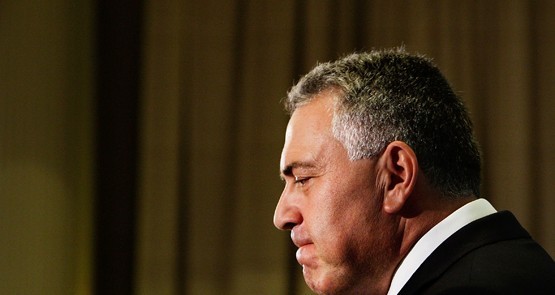 The quantum of cant and hypocrisy from Tony Abbott and Joe Hockey in response to yesterday’s GDP growth figures seems one of Australia’s fastest-growing economic variables.

While it is true, as Crikey reported yesterday, that the higher figure for the first quarter of 2015 — compared with the last three quarters — is welcome news, there seems scant basis for Hockey’s hubris.

Really? Only if just the one number is considered in isolation. Comparisons with just one quarter are fraught exercises for several reasons. Firstly, aberrations arise randomly. Second, the first quarter in the United States and elsewhere is frequently down due to winter inactivity. Third, the first quarter in Australia is boosted by summer tourism and education. And fourth, we have the much more reliable annual GDP growth figures provided each quarter along with individual quarter-on-quarter numbers. This is the number economists do (and politicians should) examine.

Looking at this, things are actually pretty grim for the PM and the Treasurer. At 2.3%, this is the equal-lowest annual-growth figure since the second quarter of 2011, when the GDP was whacked by the devastating Queensland floods.

The annual rate of 2.3% is not the best of the G7 countries, as Hockey would have the Parliament believe. The UK is travelling at 2.4% and the US at 2.7%.

Compared with the wider group of comparable economies — the 34 members of the Organisation for Economic Co-operation and Development — Australia currently ranks 19th. Australia’s 2.3% is well behind Spain (2.7%), Poland (3.6%), Hungary (3.4%) and the Czech Republic (4.2%), which have none of Australia’s immense natural advantages.

The performance looks even more dismal when evaluated against Abbott’s and Hockey’s bold promises and denigration of the opposition before the 2013 election.

“It will be my number one imperative to safeguard the economy against a significant downturn and to turbo charge economic growth and jobs,” Hockey said in June 2013.

When that was spoken, annual growth was 2.5%, the fifth highest in the OECD, behind Chile, Estonia, Israel and Turkey.

Tony Abbott was even more gung-ho in opposition: “The Coalition can deliver tax cuts without a carbon tax because we will eliminate wasteful and unnecessary government spending and because lower taxes and higher productivity will boost economic growth.”

When that was spoken, November 2012, annual growth was 3.1%, the fourth highest in the OECD, behind Mexico, Chile and Estonia.

Hockey said yesterday, while boasting of his 2.3%, ranked 19th in the OECD: “We’ve had a terrific set of numbers that came out today, and those numbers have proven that there are some clowns out there that are talking about recession and dark clouds on the horizon. They’ve been proven to be looking foolish.”

Well, let’s hope they are. In due course. We shall know more about that in three months’ time, as Australia’s winter sets in. Meanwhile, with actual delivery measured against promises, a touch more humility on Abbott’s and Hockey’s part — and civility towards their predecessors — might be in order.

Why the R-word needs reforming, refining and reimagining — right now

Joe Cigar Hockey and hubris go as hand in glove. He also has a habit of passing BS off as unsupportable fact. That of course is the traditional domain of a buffoon.

I think Joe’s preferred name to be applied to person’s such as himself is “clown”.

I think Joe was just so relieved it was not zero or negative that he had a frisson that just had to be shared.

Yet, despite the reality (those damned numbers…) look & listen to the RWNJ press & shoutjocks, it’s manna today & marmalade tomorrow.

Good stuff. This sort of primer is valuable.

Of course it is based on actual facts. That means it is meaningless to Hockey, Abbott and not a few Liberal supporters.