Fairfax journalists fear the end of church and state at the company's local papers as a position for an ad-selling journalist is applied. But the company says it was a mistake.

An ad for a “sales representative and journalist” in Henty and Wagga Wagga has raised alarm bells at Fairfax, with journalists fearful it signals an erosion of the sacrosanct journalistic division between commercial ad sales and editorial, in pursuit of cost savings. But a Fairfax spokesperson says the position was advertised in error.

Wagga Wagga, home of the The Daily Advertiser and a number of other smaller regional papers, was one of the papers to suffer heavy cuts in the first round of regional Fairfax redundancies in October last year. Fairfax regional staff were shocked to see the position advertised. A detailed position description said of the entry-level role:

“A fantastic opportunity exists for a highly motivated and passionate Sales Representative/Journalist to join our dynamic team, who will be responsible for the creation and delivery of quality news journalism content, deliver advertising revenue across a portfolio of products from both print to digital, in a permanent capacity”. 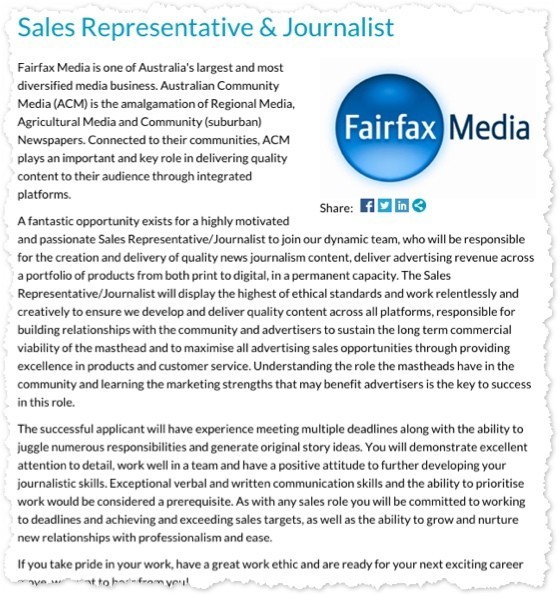 After drawing censure on social media, the position was deleted from Fairfax’s career’s site. A spokesperson told Crikey: “This position at a small weekly paper in regional NSW has been mistakenly advertised as a combined role. It should have been two part-time roles, one for sales, another for editorial. It is not our intention to have one person performing both functions.”

The issue is likely to escalate tensions in regional New South Wales, in which Fairfax is currently rolling out the latest iteration of its NewsNow digital strategy. Under the NewsNow model, journalists assume sole responsibility for subediting, photography, social media and archiving, allowing Fairfax to make redundant many of these other roles at its regional newspapers.

Tomorrow, the journalists’ union, the Media Entertainment and Arts Alliance, will represent Fairfax’s Illawarra workers at the Fair Work Commission. The Illawarra Mercury is one of only two Fairfax regional papers on the same enterprise bargaining agreement as the metropolitan papers, which include The Sydney Morning Herald, The Age and The Canberra Times. This agreement has a clause that says if positions like photography are made redundant, Fairfax management cannot then expect another position to preform the same duties. The Newcastle Herald is the only regional papers to benefit from this stronger EBA, but is not joining tomorrow’s Fair Work action, as its redundancy round is not scheduled to begin until August.