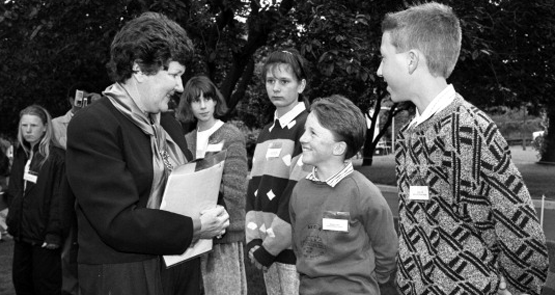 We were discussing why women get such odious treatment at the top of the political pole in Australia when Joan Kirner, Victoria’s first and only female premier, nailed it: “Women are accepted if serving but not if controlling. We might be accepted as a minister, even a deputy leader, but the leader controls, controls the government, influences the state, the country .”

A member of the unofficial “Female Firsts” political club, the first and only female premier of Victoria, Kirner was remorselessly depicted in cartoons as a housewife in a polka-dotted shift, serving, as appropriate, in the kitchen but stuffing things up for the state. Kirner was anointed leader in Victoria in 1990 at a time of almost inevitable and imminent defeat of the Labor government, yet the sense in the conservative press of her illegitimacy in power was palpable. Because Kirner’s  likability factor was high, they were not going to risk her getting traction in office.

Twenty years later, in a salute to her friend and mentor, Australia’s first female prime minister, Julia Gillard, wore a black dress with white polka dots to her first press conference in the top job.

Hillary Clinton drew a similar lesson from her 2008 presidential nominee campaign; that the country only approved of her (and female candidates in general) when she appeared to be serving others, rather than seeking power out of personal ambition. Oh, that dreadful grasping female ambition thing.

Joan served as a minister and deputy premier, took control of Victoria in recession, when it was broken by the collapse of financial institutions — the Pyramid Building Society and Tricontinental, the investment arm of the State Bank. She governed under ceaseless pressure, from, in part, a sexist media — “Mother Russia” was another dreary cliche from unions who arced up, famously blocking Swanston Street with stationary trams. She responded with strength.

She sold the State Bank to the Commonwealth, reined in spending, set up Landcare, and established Victoria’s hugely successful and much-copied major events strategy. She invited businessman Lindsay Fox and others to create the Committee for Melbourne to re-energise the capital.

But it was too late for Labor. Kirner, like first female premier Carmen Lawrence in Western Australia, was elevated to clean up, stem the losses, and she did. In the face of toxic attacks, Kirner ran a dignified and effective campaign in 1992.

The Liberals’ “Labor: the Guilty Party” advertisements blanketed the media. The premier was held personally responsible for everything rotten in Victoria, including the weather, the loss of your footy team and probably the shooting of JFK.

Jeff Kennett and the Liberals went after Kirner in a way that presaged Tony Abbott’s virulent assault on Gillard’s character. Those who, on her passing, now profess undying friendship might ponder the personal damage of political hardball. They might also reflect on the mean-spiritedness of that government denying Kirner a pension. Of all the Victorian premiers who peer from their portraits in Queens Hall, she alone, the state’s first female premier was denied a parliamentary pension. Her long and expensive illnesses were borne with her trademark stoicism but not with the assistance of a premier’s pension — and that is a disgrace.

Joan Kirner took control as premier, but it was her public service after that was transformative.

She founded Emily’s List to propel progressive women into Parliament. Always the political strategist she insisted the organisation sit outside the ALP, independent, but capable of goading the party towards the historic affirmative action rule on female preselections and policies such as changes to equal pay principles in the Fair Work Act to the inclusion of RU486 on the Pharmaceutical Benefits Scheme.

The top female Labor leaders in the land are and have been women supported by Emily’s List — from Julia Gillard and Deputy Labor Leader Tanya Plibersek to every female premier of Australia. And all Labor female MPs have had a mentor, thanks to Kirner’s foresight. It could be a call at the end of a bad day, or a note of advice and support.

“Always have something positive and clear to say about what you want to achieve and who benefits,” she wrote to me in November 1999, a few weeks after I had been sworn in as Victorian minister for education and the arts. Her advice was generous, practical, born of experience and an instinct towards the pastoral care of women who followed her into the parliaments of Australia.

There was something constant about Joan Kirner, which the public learnt to recognise. She inherited a basket case but earned bouquets. She left politics but continued to build political capital in the form of Labor women leaders and platoons of Labor women candidates around the country, policy-smart, campaign-ready. Joan was the voice of women in politics for 25 years. This week it fell silent, and we felt the void.

* Mary Delahunty is the author of Public life: Private Grief and GRAVITY: Inside the PM’s office during her last year and final days. She is a former state Labor minister and a Gold Walkley award-winning journalist

Why are the NSW Left so good at making money?

Yes, the denial of the pension to Joan Kirner was outrageous. Her 1982 classmate, the late Jim Kennan, later her Deputy Premier and successor as Leader of the Opposition was treated the same way after he retired, again just short of the vesting date. Neither of them deserved this treatment, which was unprecedented. The ctee, controlled by the Government, had routinely exercised its discretion in favour of members who retired before the vesting date but had given substantial years of service. Nothing heard from Jeff Kennett today on these vulgarities.

Thanks for that piece Mary.
I never met Joan, but I was always a fan.
She showed enormous grace under fire during her days as Premier and beyond.
BTW I’m deeply shocked to hear she didn’t get a parliamentary pension. Bloody shameful stuff.

The strike referred to by Ms Delahunty with stationary trams in Melbourne happened in January-February 1990. Mrs Kirner became Premier of Victoria 0n 10 August 1990.