The right is collapsing, capitalism is dead, FIFA are getting their just desserts, and Charles Kennedy is dead. What a week. 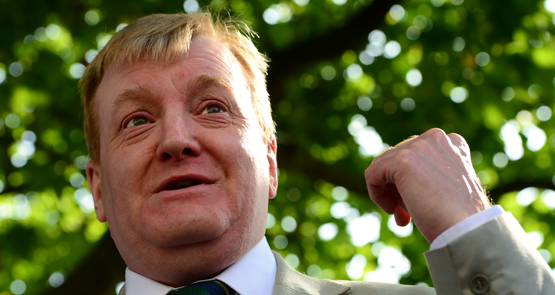 Wow, it was a strange day in the northern hemisphere.

Let’s just recap, shall we …

1. We were all greeted this morning by the news that former leader of the Lib Dems Charles Kennedy had died. The news was too late for the UK’s morning  papers, so they carried on regardless. But the news was big.

2. Kennedy, Lib Dem leader at the turn of the 21st century, had been a member of Parliament for 30 years, since the 1980s. He represented the western coast of the Scottish highlands, the largest UK constituency by far, about the size of Gellibrand.

3. He was originally elected for the SDP and became a Lib Dem when the parties merged. Always on the left of the party, he nevertheless led it when it lurched rightwards. His champion move was opposing the Iraq War, from a liberal point of view, and with deep moral clarity. In 2003, he was the voice within the establishment. But he was also an outsider with a sense of irony about his role.

4. He was also an alky. This will be brushed over because the term “alcoholic” has become overused for anyone who likes more than three beers of an evening. But no, this guy was the real deal, a spirits-demolisher as only the highlands can produce.

5. What is this demon running through the Celtic race, that genius is twinned with fatal affection for the fermented grain and grape?? It is the thing itself. The Scots gave us the Anglo-American enlightenment (Hume, Ferguson, Boswell, and the first Marxist, Adam Smith), and the Irish gave us the culture. For each, booze was the antidote to too much thinking. It gave Charles Kennedy the wings to make the Lib Dems a funky modern party, winning 60+ seats in a rigged house.

6. Kennedy resigned the leadership, acknowledged the alcoholism (about a quarter of what Churchill ran the war on), and disappeared. The man was after my own heart. Only met him once, in a Westminster pub, but he was a demon for the vodka, and I recognised a fellow traveller when he persuaded the bartender to leave the bottle. What was in him that needed that? An insufficiency of the world.

7. Knew all this by afternoon, but while I was on the train, Sepp Blatter quit. Wow. That’s a deal. Wow. Does it matter? Yes, it fucking does. It’s only football, but sport is a value-formation thing, more than ever these days, in which nothing seems real. Sport …

8. Capitalism appears to be over. I mean really over. There is nothing left. This weekend about five people said this to me, or something like it, and I was the sixth. Suddenly, in the wake of the Cameron victory, as the Greece thing plays out, as every Labo(u)r party in the world scrambles to make some meaning out of their pathetic inheritance.

9. Bad news for a lot of people. The right first, dumb as dog shit, always, coming apart in real time, unwilling to knife Tony Abbott (September or October surely; Abbott is the Thanksgiving turkey), living in stasis, believing, really, in nothing.

10. But also for a certain section of what used to be known as the left. Grant-dependent, wired into the state, they have long since lost the desire to transform the frame, preferring to live within it.

11. That’s the Charles Kennedy thing, I think: not to mythologise the man but he made the stands when they were crucial. God knows what will be found in the days to come, but weird shit is going to start to happen. Remember: there is no more money. Debt, globalisation blah blah, the system has mortgaged the future for present prosperity.

12. Sepp Blatter. Well, it’s a paradox, innit? Who could deny that these bastards deserve it? But who could not be disconcerted by the sight of FBI arresting people in Switzerland?

13. Wow, that’s all I got. OK there you go. Happy trails, tomorrow in Istanbul. Nick Clegg killed Charles Kennedy long ago, we all know it. The fact we know it, and it means nothing is a measure of where we’re at.

Vale Charles Kennedy. You did your best.

Looking forward to your adventures in Istanbul Guy.
(For pity’s sake take care. It might get a bit hairy for anyone even *vaguely* described as “media”.)
Nice words and thoughts on Kennedy and you’re right about Blatter. Such good news. I nearly spilled my latte when I read that this am.
World’s gone mad.

“who could not be disconcerted by the sight of FBI arresting people in Switzerland?”

It seems that if your organisation has an office in the US then you are subject to US law no matter that you have never been there.

How good is that?

3. Opposing the gulf war in 2003 was an inspired call. Creane opposed it as well but lacked the spunk to stand up and tell everyone in favour of it that they were fools. As Abbott would have had he been in a similar position.

5. We also have the Scots to thank for James Watt, inventor of the steam engine and father of the industrial revolution.

8. Capitalism is not over. Sorry but evidence of its demise is exaggerated. Private ownership of property and business ownership is going nowhere. OK, it is going towards small business but what’s wrong with that? Public ownership is a gonner. Look at China.

9. Abbott is not going anywhere. The Libs will go down with him if they go down.

Libs are going nowhere. Just observe the huge following of rabid RWNJs on the interweb attacking anyone who looks to the left. They haven’t felt enough pain yet, and it doesn’t matter if the guy next to you is hurting.