The Killing Season reviewed, plus other media tidbits of the day ...

Integral to the series’ success is Ferguson’s selection and use of archival footage. She’s largely got Rudd to thank for that; he was a politician who lived in and demanded the spotlight more than any other in recent memory. From radio interviews to footage of Rudd comforting bushfire victims, to Rudd on Rove Live, there are thousands of hours of Rudd footage available. Although the 24-hour news cycle can often rob us of the time necessary for intelligent, considered reflection, it also leaves us with a treasure trove of material to pore over when we’re ready to examine recent history.

While Ferguson’s skills as an interviewer are as strong as they’ve ever been, she doesn’t have to just rely on recounts to recreate pivotal moments. There’s somehow always some footage that can be used to demonstrate the point being made, even though the public image of the Rudd government was expertly crafted and didn’t necessarily match what was happening behind the scenes.

There are some brilliantly astute moments where she juxtaposes what the politicians are saying today with what they said several years ago (in one section she follows up a long discussion about the internal turmoil of the first Rudd government with Rudd and Gillard saying there’s never been major conflict between them). Or she uncovers a piece of footage that demonstrates an unusual reaction that can now be explained with the benefit of hindsight.

The breadth of material available to Ferguson is unprecedented, but there aren’t many who could spin it into dramatic gold. There’s a strength in that combination which puts The Killing Season into a class all of its own. — Read Ben Neutze’s full review of The Killing Season on Daily Review.

The state of print, around the world. Australia and Oceania newspapers remain the black hole of the global newspaper business for yet another year, according to the authoritative World Press Trends report from the the World Association of Newspapers and News Publishers (WAN-IFRA). The association released a summary of its annual survey of the global newspaper business to its 67th talkfest in Washington overnight.

Papers in Australia and Oceania (mostly New Zealand) again led the way (for a second year) in reporting the largest annual falls in circulation and the largest drops over the past five years — both increased from the rate of decline reported in 2013.

For all papers, the World Press Trends report again makes gloomy reading, despite an attempt at an upbeat assessment of changing revenue trends. Strong growth in sales in Indian newspapers is the only bright spot in print and is helping make the world scene look rosier than it is. The report shows that print circulation increased rose 6.4% across the world last year globally in 2014 from a year earlier and shows a five year growth of +16.5%. ”This is the largely the result of circulation increases in India and elsewhere in Asia; the newspaper business in India is still the healthiest print newspaper industry in the world. Updated Indian figures have significantly affected the global picture and they partly come from a growing number of publications in India,” the report said.

The internet and mobile services continue to drain ad revenues away from print and the report concludes with the frank admission: “Newspaper digital advertising revenues will not replace high yield print revenues.” The rise of paywalls is having a positive impact, the report also revealed. That said, globally, more than 93% of all newspaper revenues still come from print, with digital advertising a small but growing contributor: up 8.5% in 2014 and nearly 60% over five years.

“The basic assumption of the news business model — the subsidy that advertisers have long provided to news content — is gone,” said Larry Kilman, Secretary General of WAN-IFRA, who presented the survey.”We can freely say that audiences have become publishers’ biggest source of revenue.”

That said, globally, more than 93% of all newspaper revenues still come from print, with digital advertising a small but growing contributor: up 8.5% in 2014 and nearly 60% over five years. That 93% figure was unchanged from last year’s Press Trends report from the Association for 2013.

And the report’s authors were wise enough to point out the big problem with newspapers was depending on growth in digital ad revenues (and paywalls) to save them:

“But the main benefactors of digital ad spending continue to be social media and technology companies. Google takes the biggest share, with 38 per cent (US$19.3 billion) of digital ad revenue. Facebook took nearly 10 per cent in 2014, and is the biggest recipient of total digital display and mobile display advertising revenue. Television continues to maintain the largest share of global advertising revenues, with just under 40 per cent, followed by desktop and mobile internet with more than 24 per cent, newspapers with 15 per cent, magazines with 7.3 per cent, outdoor and radio with around 7 per cent, and cinema with half a per cent.”

Front page of the day. FIFA’s Sepp Blatter has finally stepped down … 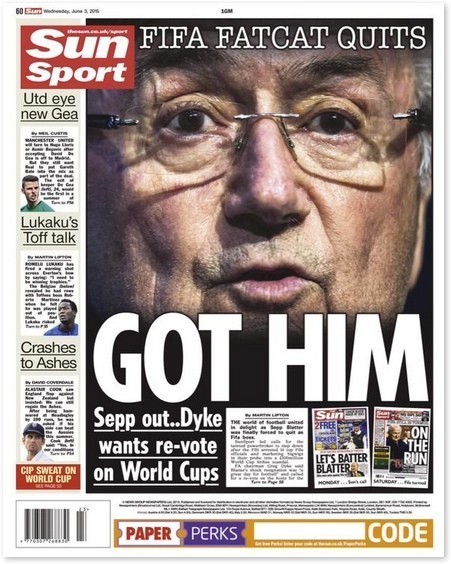 Abbott’s not bad with the spotlight thing either, specialty fluoros, but he only lasts in bites.