Keane: Australian neocons on the march back to Iraq

Australia's neocons are calling for Australian troops to return to fighting in Iraq - ignoring how the war on Iraq they ardently supported gave us Islamic State and a feeble Iraq. 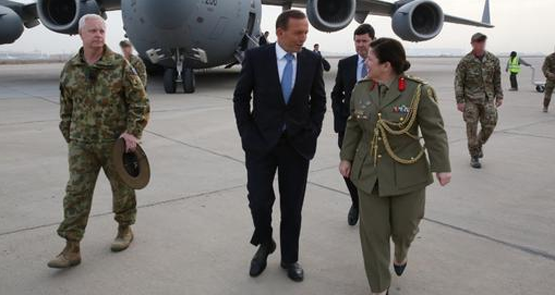 Like their American counterparts, it seems Australia’s necons not merely have learnt nothing from the Iraq war debacle, but have no shame about it.

In recent days, two senior Coalition-aligned defence commentators, Peter Jennings and Jim Molan, have ramped up their rhetoric about the need for Australian troops to be deployed fighting Islamic State. Today, the government left open the possibility of considering an Iraqi request for more Australian troops, while saying no request had been made.

Jennings is a long-time Liberal defence adviser both in opposition and government, and he now runs the taxpayer-funded military think tank the Australian Strategic Policy Institute. Molan served as Chief of Operations in Iraq in 2004 and these days is a Liberal Party adviser and candidate, although even Molan left then-defence minister David Johnston’s office after three weeks.

Both remain, even now, ardent supporters of the war in Iraq, which led to the killing of hundreds of thousands of Iraqis, cost trillions of dollars and created a failed state unable to defend itself against the offshoot of a militant group that grew directly out of the war. Writing about the decision to invade Iraq in 2013, Jennings maintains the correct decision was made at the time based on “a very substantial flow of reporting to government” and the only mistake was a failure to “think through the military requirements of the post-invasion phase”. “Australia didn’t have a realistic option to cut itself away from alliance loyalty to the US in 2003,” Jennings insists.

“Victory is eternally just a few more corpses away, it’s always just around the corner of mangled bodies.”

In 2013, Molan, who at least could claim first-hand experience of the conflict, argued that Iraqis were better off then than under Saddam Hussein, despite the massive death toll, life expectancy in the country still being two years lower than it was under the dictator and the reign of terror conducted against Sunnis by the regime of Nouri al-Maliki, which included systematic use of rape in prisons. He insisted that the attack on Iraq was not launched on the basis of a lie about weapons of mass destruction, even though it had been confirmed that the Bush administration was lying as long ago as 2006 (and as recently as a fortnight ago). He also believes that Australia should have engaged in the Iraq conflict with far more troops and resources than the Howard government committed.

The record of both men on Iraq appears to be ignored by the media in its coverage of their views.

Now, both Jennings and Molan want Australia troops back fighting in Iraq. For several days, Jennings has been calling for Australian troops to accompany their Iraqi trainees into battle. Yesterday in The Australian (available at the ASPI site), Jennings, who chairs the defence white paper expert panel, went further. “It’s time also to get over the experience of the 2003 invasion,” he declared. Air strikes should be freed up so that concerns about civilian casualties don’t restrict operations, Jennings says. “Difficult as it is to accept civilian casualties, restricting attacks on Islamic State leaders has only prolonged the conflict leading to many deaths.” And, he argues, we should do what we did so successfully in Oruzgan in Afghanistan and accompany Iraqi troops into battle. That will give “local units the confidence and grit to take the fight to the enemy”.

That’s the Oruzgan that is returning to Taliban control as we speak.

Molan, who last year declared the war against IS “remarkably successful”, couched it in terms of feeling sympathy for the Iraqis. “These poor guys are not going to be ready to fight IS,” he told Fairfax, which raises the question of why Australia wasted its time and money training so many of them under the Howard government. They need “the command backbone of Australians and Americans and Brits”. He supports loosening the rules of engagement for bombing, too.

Molan’s and Jennings’ “can’t make an omelette without breaking some eggs” attitude to civilian casualties, of course, will only create more support for Islamic State and stimulate more recruitment from the communities bombed by the west, just as US drone strikes in Afghanistan, Pakistan and Yemen have for years been creating new generations of terrorists. And it will stimulate more radicalisation of Western Muslims — more than anything else, attacks on Muslim communities overseas are what drives radicalisation, making us less safe from terrorism in our own countries.

And bear in mind that Molan, as allied Chief of Operations, directed the allied assault on Fallujah in 2004, a brutal battle during which white phosphorous munitions were used and, perhaps, depleted uranium rounds. The battle left a deeply toxic legacy of cancer, birth defects and infant mortality that has continued ever since.

If you want to know what prompts people to take up arms against Western forces and their allies, or even to turn to terrorism, look no further than children killed by our bombs, even years afterward by the poisons we’ve left behind.

In December, Jennings thought Western air strikes combined with Sunni tribes and the Iraqi army could handle IS. Now he says 10,000 Western “advisers” and bombing co-ordinators, and some less discriminate bombing, could do the job. But it’s a high-risk strategy, Jennings admits, and it might not work. What then? He doesn’t say, but presumably the answer would be still more troops and more bombing.

That’s always the way for neocons: victory is eternally just a few more corpses away, it’s always just around the corner of mangled bodies. There’s always a need for Western forces to kill more Muslims, terrorist and civilian — regrettably, of course, but failing to do only leads to more deaths, so it’s the more humane option, really.

And thus the War on Terror goes ever on.

Retracing our steps on the march into Iraq

The revelation in a US DIA document that ISIS is the deliberate (not accidental) creation of the Pentagon should be the final proof that the Neocons will never cease in their quest to escalate conflict.

Is it any wonder that the US keeps “accidentally” delivering weapons into the hands of ISIS, and that US fighter pilots are quoted expressing frustration that they are often not allowed to fire on ISIS targets?

Australia should exit this transparent debacle as our “good intentions” are contrary to US objectives in the Middle East.

There are billions to be made from war and promotions to be had. What is not to like.

It’s all in The March of Folly, by the great historian Barbara Tuchman, which examines a number of historical case studies from Alexander the Great to Stalingrad and Vietnam, and concludes that human psychology makes it almost impossible for stakeholders in doomed military adventures to take rational and fact-based advice on timely retreat and/or negotiation.

We the Australian sheeples must not deny the neocons to continue on the paths of successful military failures in Iraq and Afghanistan. After all there is lots of money to be made from war, and now we also have an ever increasing local security industry to justify.