The marriage equality amendment moved by Opposition Leader Bill Shorten and the continuing debate over the latest counter terrorism measures from the government, particularly as they relate to citizenship, were still dominating political discussion early in the last seven days. Predictions of a collapse in business investment and a property bubble in Sydney and Melbourne started to swing the pendulum back to the economy this week as the RBA held interest rates steady, but Treasurer Joe Hockey still slipped out of the top five.

The main upward movers were the so-called “cabinet rebels” including Attorney-General George Brandis and Agriculture Minister Barnaby Joyce who reportedly blocked moves to allow the Immigration Minister Peter Dutton to strip sole Australian citizens of their citizenship. The backbench wasn’t happy, with 40 of them signing a letter supporting tougher action against Australians believed to have fought with terrorist organisations.

A clean-out of the Queensland racing industry following revelations of live-baiting in greyhound racing pushed Premier Annastacia Palaszczuk into the top 10, while rising tensions over China’s claims in the South China Sea pushed Defence Minister Kevin Andrews higher as well. 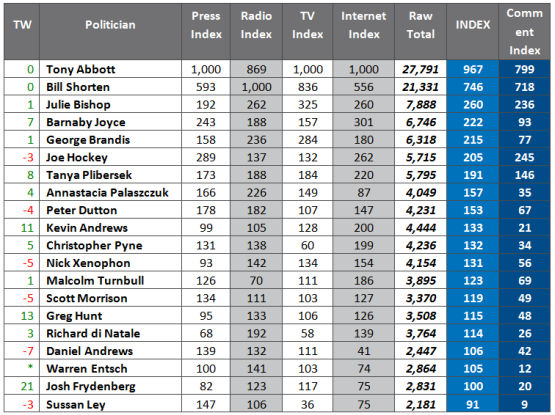 Same-sex marriage also got a fair, if not dominant, run on talkback this week, with Bill Shorten well ahead and Deputy Opposition Leader and main Labor proponent of the issue Tanya Plibersek making a rare appearance in this list.

In a bizarre move fitting the Byzantine nature of football politics, FIFA President Sepp Blatter resigned his post only four days after easily being re-elected, amid rumblings of European boycotts and a continuing FBI investigation into corruption at the top levels of an organisation that’s questionable governance long pre-dates even Blatter’s 17 year reign.