In The Killing Season, Rudd and Gillard fight to define the legacy of a tumultuous period in Australia's political history. 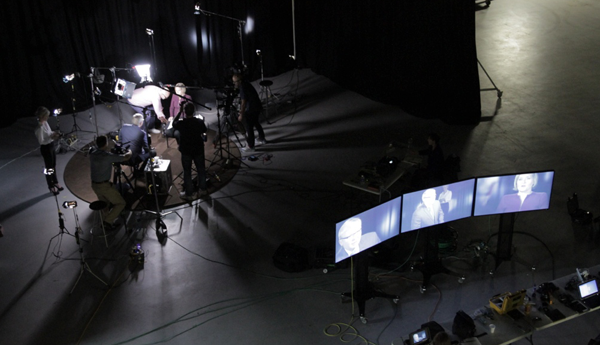 The opening sequence of The Killing Season is rendered in black and white. An ominous piano melody pulses in the background. A crow squawks in the frame. If this was a detective drama, you’d expect to see a body soon. It’s an odd opening for a political documentary. But the ABC’s new three-part documentary on the Rudd-Gillard years is nothing if not a bitter tale of betrayal and assassination.

That’s evident in the name. The ABC’s previous documentaries on governments were called Labor in Power and The Howard Years. The Killing Season is, well, far more evocative, but host Sarah Ferguson says the name felt natural to her and her producers, given the defining events of the period.

“[Former trade minister] Craig Emerson claims he coined the phrase,” she told Crikey. “It refers to the last week of parliament before parliament rises, which is often the moment for leadership changes. Because in the end, the politics of the leadership in the Labor party came to dominate that period, it seemed to us to capture the mood at the time, and the key political dynamic.”

Some in the Labor party would rather their two terms in government were defined by triumph over the global financial crisis, or by the roll-out of the National Disability Insurance Scheme. Crikey asked Ferguson whether any Labor MPs were upset by the name. Sure, she concedes, there was some disappointment.

“One of them just hung his head and said, ‘you don’t mean [to use that name for] the whole series do you?'” But she says the production team didn’t spend too long considering the name — it fit easily. “What this period of time represents, and what it’s clear in the telling of it, is that it’s a natural drama. It suits a dramatic title — one that would go with a TV drama series.”

The Killing Season‘s first episode will perhaps be the least dramatic, but it is nonetheless intense viewing, heavy with tension before the storm. Airing Tuesday next week, episode one covers Rudd’s victory from opposition and most of his first prime ministership. Leadership tension is implied and alluded to, but not yet fully fleshed out. Rudd’s axing is the subject of the entirety of the second episode, while the third will deal with Gillard’s prime ministership and Rudd’s return to power.

From 2007 to the early parts of 2010, much was going Rudd’s way. Former Treasury head Ken Henry says Rudd was far more prescient on the threat posed by the global financial crisis than Henry himself was. Former US Treasury head Hank Paulson is no less complimentary, saying Rudd’s role in co-ordinating the global response to the crisis was pivotal. At home, Rudd was dubbed Kevin 747 for his jet-setting ways. The Killing Season presents a robust defence of Rudd’s priorities during this period.

Rudd’s personal warmth is also attested to by one of his former cabinet ministers, Jenny Macklin. She describes his dealing with the families who lost loved ones and homes in the Black Saturday bushfires, which killed 174 people in 2009. He was nothing but compassionate, she says, and took a personal interest in the plight of the families, far after the spotlight had faded. In the documentary, Ferguson asks how this compassion and understanding fits with Rudd’s reputation as a careless, highly demanding driver of his staff. Macklin shrugs and says, “people are complex”.

Also examined in depth is the Godwin Grech affair, which left the opposition leader at the time, Malcolm Turnbull, looking battered and bruised after a catastrophic misjudgement.

An examination of his government during this time should be Rudd’s time to shine. But his triumphs are overshadowed somewhat by his bitter denouncements of allegations thrown in by Julia Gillard. She accuses him of physically bullying her while in opposition, of being difficult to deal with, and of refusing to bring things to wider discussion in cabinet. Rudd disputes the specifics of all her allegations. It makes for difficult viewing. In these parts of the interviews, Rudd is clearly not enjoying himself.

Ferguson had two separate, long interviews with both prime ministers. Her intention, she says, was to fade into the background, and give them time and space to talk. But given the damaging accounts made by Gillard towards Rudd, Ferguson had to, at times, step forcefully into the frame. Putting allegation after allegation to Rudd in particular, she says, wasn’t a pleasant experience.

“You have a very strong instinct as an interviewer for how long you can do that. No human being isn’t tortured by that. It’s relentless. That is not at all enjoyable. And there’s a point where it’s not fair either,” she said, adding that she was conscious of avoiding a situation where Rudd was constantly denying what Gillard said about him. “But inevitably, there are patches to cover. And Kevin Rudd’s point was — ‘why am I the one in the witness box?'”

“It was extraordinarily intense.”

The intensity of the series isn’t helped by the fact that the events described are so recent. Rudd deposed Gillard as prime minister two years ago. The country and the Labor Party, Ferguson says, has “just moved on”.  “It’s rich television, and it’s still very raw,” she said. “The sense of loss and disappointment form Labor people about what they could have achieved and didn’t — the opportunity they squandered — is profound.”

In The Killing Season, Rudd and Gillard fight to define the legacy of the period. “It’s a contentious narrative for them and everybody else involved.” Ferguson says she knows people will watch the series with strong prejudices. “My hope is they don’t leave with those prejudices intact.”

Gillard ‘hostile’, Rudd chucked a tanty: behind the scenes of <em>The Killing Season</em> 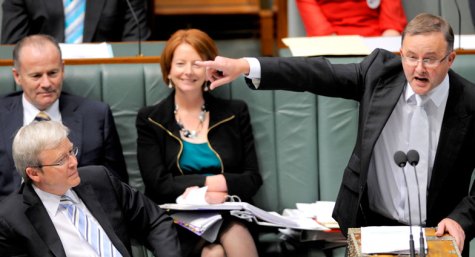 Hmmm. Good television perhaps, but fortuitously it also keeps Labor Party disunity front and centre in the electorate’s collective consciousness: something which I’m sure delights the ABC’s current LNP masters.

Not that they’d ever interfere with the ABC’s artistic independence, of course …

Can’t wait for the version which will eventually be done on the LNP. it will take some time yet…but patience is a virtue.

Hopefully it will be superb Television. Although it will bring focus to Labor’s disunity, it might help Party members to reconsider their choice of Bill Shorten as leader. The ALP
should be redesigning their ethos, not playing “Follow my leader” with the Liberal Party.

Venise – It wasn’t the ‘(Labor) Party members’ who chose Bill Shorten, it was the members of the Labor Parliamentary party. They each had a vote multiple times the value of ordinary members, who (from memory) voted overwhelmingly for Albo.
Having said that, we have Shorten as leader, elected under the current leadership rules. Rather than dwell on divisive leadership speculation again, I know a lot of ordinary Labor party members who think we should just get on with the job of returning to government.
The major priority is removing this noxious LNP government before it is too late and they have permanently damaged the country and its citizens.
Upon reflection, that may already have happened!