Fully half of Abbott's cabinet made statements about terrorism in May, and all that rhetoric is having a very real (and very scary) effect on the Muslim community, write Voices Against Bigotry founders Susie Latham and Linda Briskman. 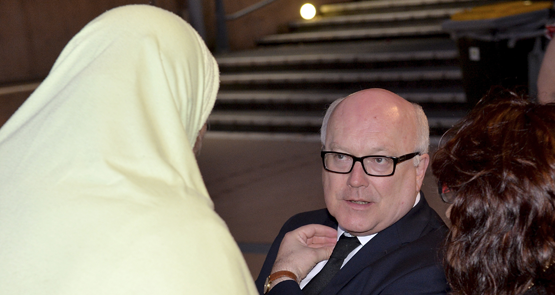 In the month of May anti-Muslim fervour increased its hold in Australia through the opportunism of War on Terror rhetoric.

In a move reminiscent of John Howard’s masterful use of the 2001 Tampa incident to encourage prejudice and revive his political fortunes, the Coalition appears to have belatedly taken up Scott Morrison’s 2011 suggestion that it should exploit community concerns about Muslims with gusto. In May, at least nine of Tony Abbott’s 19 cabinet members made statements about terrorism or announced initiatives to tackle it.

Attorney-General George Brandis told the Today show that terrorism was a growing threat and foreshadowed a series of announcements aimed at keeping Australians safe. Morrison’s contribution was to assert that asylum seekers, “50,000 people who turned up on Labor’s watch”, were a potential threat to national security.

The Australian, during the same week most of these statements were made, ran “an unflinching series of articles examining Muslim Australia,” expanding on Morrison’s comments. It called asylum seekers “illegal boat arrivals”, stating that many of them were Muslim and that Afghan asylum seekers had been arrested in anti-terror raids.

Abbott, in a joint conference with current Immigration Minister Peter Dutton and a key player in Howard’s demonisation of asylum seekers, Philip Ruddock, reminded Australians that there were people “in our midst” who wanted to harm us. He declared: “We need to bring the same drive, focus and clarity of purpose to countering terrorism that resulted in stopping the boats under Operation Sovereign Borders.”

A press release from Abbott and Dutton explained that dual Australian citizens who “fight with or support” groups such as Islamic State “whether in Australia or on foreign soil” could lose their Australian citizenship at the discretion of the Immigration Minister. Ruddock has been recruited to lead a national discussion on “further possible measures” to punish these offenders.

Just in case all that wasn’t enough to terrify the pants off the Australian public, Abbott elevated Justice Minister Michael Keenan to Assistant Minister on Counter-Terrorism and appointed former diplomat, Greg Moriarty, as adviser on terror to the Department of Prime Minister and Cabinet. The first issue Joe Hockey mentioned in his budget speech was terrorism. Foreign Minister Julie Bishop linked people-smuggling to terrorism, Kevin Andrews used his Defence portfolio to announce training of Iraqi troops to counter the terror threat “reaching out to Australians” and Education Minister Christopher Pyne announced that education officials would work to stop schoolchildren from being radicalised. Liberal Senator Cory Bernardi initiated an inquiry into halal certification, because funds could be going to support, yes, terror.

This unprecedented and clearly orchestrated fear campaign is a windfall for fringe groups that have been campaigning against Muslims for years. It will help legitimise the anti-Muslim political party associated with the extremist Q Society, the Australian Liberty Alliance (ALA), which will launch in October this year. It will be a boost for ALA’s policy platform, which includes banning permanent residency for Muslims from 57 countries and imposing severe restrictions on mosques and Islamic schools, not to mention restricting multiculturalism more broadly. It will help normalise anti-Muslim rallies and the growing attacks on Muslims, particularly women, doing nothing but going about their daily lives.

Labor’s response to this fear-mongering has been pathetic. As with the Howard-era demonisation of asylum seekers, the strongest opposition seems to be coming from within the Liberal Party itself, with some cabinet ministers arguing against measures devised to strip citizenship. Bill Shorten’s response was to issue a press release congratulating the new terror adviser on his appointment. “Labor will continue to be constructive, bipartisan and considered in our approach to national security. Nothing matters more to Labor than keeping Australians safe and our country united.”

United. The only word that gave the slightest possible acknowledgement of a push to divide Muslim and non-Muslim Australians. A word that more politicians should say more often, and mean it, instead of catch phrases like Abbott’s “Team Australia”, which promote division while ostensibly signifying unity. “Unity” is not going to be led by politicians, because in this climate, there’s too much to gain politically from demonisation. Such demonisation reached a crescendo in the last month, but the upsurge will no doubt continue unabated. That’s why ordinary Australians need to take the lead and organise to challenge Islamophobia. Muslims are always told to denounce extremists in their ranks. It’s time for decent non-Muslim Australians to do the same, by countering the anti-Muslim extremism that has taken hold politically.

*Susie Latham is a PhD student at Curtin University. Linda Briskman is Professor of Human Rights at Swinburne University of Technology. Both are founding members of voicesagainstbigotry.org

*Update: The Australian Liberty Alliance has contacted Crikey and disputes these three points:

3.” … normalise anti-Muslim rallies and the growing attacks on Muslims, particularly women, doing nothing but going about their daily lives.”

The Australian Liberty Alliance has said: “The proposal of a 10-year moratorium on resident visa categories from applicants from OIC-member states does not mention any specific faith group. The explicit qualification for the proposed moratorium is membership of the applicant’s state in the OIC [Organisation of Islamic Cooperation] — not the religion of the applicant. Non-Muslims live in OIC countries, Muslims live in non-OIC member states.  The imputation in the article complained is that we propose to explicitly discriminate against Muslims. This is not true. Likewise our policy proposal speaks of ‘applicants’, i.e. persons applying for a visa. Whereas “…banning permanent residency for Muslims…” wrongly implies  to your readers that Muslims holding a permanent resident visa would be banned under our policy proposal. This is not true.”

The LNP is just hanging out for a terrorist attack by Islamists against Australians, preferably on Australian soil – it’s about the only thing that will guarantee them success at the next election. The more bodies the better. Another Bali bombing would be a Godsend to them right now.

There appears to be no humanity left in the Labor Party.
Once they were great, I am glad my Grandfather (a lifelong Labor man who took great joy in visiting the Tree of Knowledge) is not here to see what a revolting racist rump (associate with/ agree with racists you are a racist) they have become.

When I hear about arrests of 18-year-olds in “terrorism raids” in Australia I always think of the US policies of entrapment (http://america.aljazeera.com/articles/2015/4/23/law-enforcement-entrapment-terrorists.html: “Critics also allege that the practice of using sting operations in potential terrorism cases often results in targeting mentally deficient and emotionally vulnerable individuals.”). Is something similar being done in Australia? If not, could it be done and hyped to boost the government’s re-election chances?

As inferred in this article the LNP is only getting away with all this “war” talk becuse the opposition says nary a word in reply, let alone criticism.
The LNP rhetoric was shown up with the recent raids against the “terrorist” student in Melbourne (which, coincidently, has fallen off the media radar). When it was revealed that he was a white lad of catholic parents in the better half of town suddenly the critical analysis by the government went quiet.
Not your ‘typical’ terrorist as far as LNP typecasting is concerned.
A word to the Muslim community, won’t be too long till the next election and politicians of all persuasions will be courting your votes. I hope you don’t have short memories at the polling booth.

Great article, but with one omission. you forgot to mention that the word “terrorism” in combination with the word “muslim” has the same impact on the majority of Australians as a full frontal lobotomy.
I will give you three examples. First of all the idiotic response to the Sydney Siege.
Mass invasion of privacy via meta data collection is madness. It will only drive the lunatics extremists onto VPNs, or encourage them to use encryption making them so much harder to trace. The first response to the Martin place incident should have been an enquiry asking why the 17 calls made to the terrorism hotline about Monis in the week leading up to his siege were not taken seriously. Maybe the AFP should have been given a dressing down for their stunning incompetence in missing the warning signs rather than being given another bucket load of cash to protect us.
The citizenship nonsense just palms our criminals onto another country. Good luck getting any cooperation or information sharing if this happens. And what happens when other nations retaliate in the same way?
Finally on a local level, has anyone seen the ridiculous security on the Sydney Harbour Bridge. 50 security guards working 24/7 and god knows how many people monitoring the hundreds of cameras all over the bridge. It’s got to cost at least $25 mil per annum.
Then again I suppose it’s all worth it to protect us from the muslims. Don’t expect Bill Shorten to ever question the insanity. He’ll gladly play along with Abbott’s “dumb on terror” response so he can never be seen as “soft on security”.