Rundle: why Ireland is showing us up in same-sex marriage

Australian politics is so broken we can't even pass something that 70% of the population support. 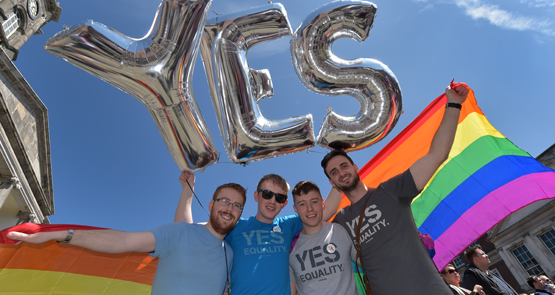 Good lord, there has to be some sort of perverse pride, so to speak, in our ability to utterly, utterly stuff up the politics of same-sex marriage, while a country like Ireland can sail through it in a way that enhances and mobilises democracy and debate. The latter is a country borne of a war in which two republicans could form three factions — two of them ganging up to kill the third — and kept in censorship and repression for decades by the dead hand of the Catholic Church, which decriminalised homosexuality only in 1993, and permits only a fairly limited form of divorce (and none whatsoever until 1995).

We are a society that for much of our history has been a byword for liberal modernisation in any number of areas — female suffrage, a living wage, the standardised ballot paper*, the environmental impact statement, and much more — and yet we have turned this straightforward issue into the equivalent of a spring break Cancun foam party. How is it possible that a political system can be so dysfunctional that a simple “yes” or “no” choice can become impossible to pose?

The question is the answer, of course. Ireland has spent a long time doing politics that are deadly serious and finding a way to come together as a nation after a decision has been made. It has a conscious history of politics that move you from one fundamental situation to another, most recently in dealing with the collapse of its economy, and acceptance or rejection of the conventions imposed by the European Union.

We, on the other hand, have a politics in which great deal of economic management has been taken out of our hands, social policy (via the states) has been separated from macroeconomic policy (federal), the right-wing mainstream press mounts a series of hysterical culture wars, and the left-liberal press is filled with a contentless identity and image politics. Politics and debate has become so ossified that the Senate inquiry and the royal commission — on child abuse, on family violence, on good god, the price of iron ore — has become the default mode of arguing it out, a quasi-judicial process replacing political contestation. Every cause becomes something other than it is, with political positioning attached to it.

The problem — and it’s a much wider one than simply same-sex marriage — is that we have institutions instead of politics. Our two major parties are quasi-state apparatuses, embedded in the system. Labor’s union-based Catholic right simply inherits the full institutionality of the old arbitration system, so we have the utter absurdity of the leader of the shop assistants’ union acting as if he had a bloc vote to veto anything post-1527. On the right, the tiny conservative bloc representing only the smallest fraction of the population are promoted well beyond their remit, to give the impression that the country is anchored by some church-going silent majority.

Having established a political process whereby every political issue is drained of content and judged purely for what it tells us about positioning, alliances, etc, it becomes impossible to get back to real politics.

What’s most alarming is that same-sex marriage is just about the simplest of these sorts of issues to manage. You’re either for it or agin it, it demands nothing, and much of what is being built upon it by both sides is a fantasy. The shift it represents is a major one, but the paradox of the issue is, once it’s been established as a plausible option, the issue is halfway won. Opponents have never been able to nail the issue — that marriage’s role as an anchor of social meaning arises from turning natural fertility into a cultural institution — because that has already been swept away by social change, such as the loosening of gender roles, no-fault divorce and the like. Once that is no longer felt to be self-evident in a culture, then marriage equality has almost already won. For a while the right tried to portray it as the end of civilisation, while some on the left tried to present it as the start of a new period of radicalisation. It has been neither, since it can be said to have conservative (stable institutions), liberal (extension of contract) and radical roots. People can support it and Manus Island, and many do. In Ireland, support for it won’t flow to a major revision of the country’s cruel and paradoxical anti-abortion laws.

So where does that leave us, when we can’t even do the politics that others regard as training wheels, move stuff along that 70% of the population support? Not in a good place, especially for tougher challenges, such as a wholesale reconstruction of the economy and development in an era when the easy money is starting to run out. Our manifold institutional inability creates a vacuum, and into it rushes … what one footballer did in front of one crowd once, one SBS TV show, and so on. Cui bono? Not the Libs, plagued by their new conservative faction, increasingly seeing themselves as a party apart. Labor, if it doesn’t stuff it up further down the line, which it most likely will. In which case benefit will go to the Greens, if they can play it right — after all, the entire political spectrum is now enacting a policy they have had on the books for close to a decade. From the emerald isle to the green continent, a marriage made in heaven, which is a nightclub.

*no, the “Australian ballot” isn’t the secret ballot. It’s the government-issued ballot — as opposed to earlier systems where parties provided their own ballot papers to their supporters.

Edmund Burke, the Irish-born British MP insisted the ‘only thing necessary for the triumph of evil is for good men to do nothing’.

He also enunciated the parliamentary principle that members are not the delegates of the electorate but the representatives. However, rigid party discipline makes members delegates of the party machine. All members of parliament should exercise their parliamentary vote in what they see as the best interest of the country but, in the Australian parliament, their vote is often subservient to the best interests of the party machine.

That is why we hold our MPs in such low esteem.

That seems the way this issue is heading too.

I couldn’t believe my ears: http://blogs.abc.net.au/queensland/2015/06/same-sex-marriage-opponent-finds-workplace-vandalised.html?site=brisbane&program=612_morning That guy needs some hugs.

Sarah Henderson’s appalling performance this morning ABC News 24 is an example of the pathetic party politicking. Attacking Labor for introducing a bill that nearly none of the LNP witnessed in the House; saying that it’s all a stunt because the Opposition Leader is in trouble because of the fabulous Budget the Government introduced (apparently she doesn’t read opinion polls), the lick-spittle defending and praising of her imbecile of a leader. And the un-asked and therefore un-answered question, if, as she claims she surveyed her electorate and they told her that she should vote yes on marriage equality, what would she do if they told her to vote no? Does she not support marriage equality herself or does she support it in spite of what the people might have said or what her zombie like party might tell her to say?
God save us from party politics, politicians and spin that make up both sides of this most egregious Parliament ever.

ohhhh, I like me some of that. Where in Australia is this? (No, the ABC nor Fairfax is left leaning. Green-Left is, RedFlag is too, but they have no impact.)