Media briefs: pick the ABC head … patron of the arts … ‘call me Caitlyn’ …

The ABC is on the hunt for a few new top brass. Plus other media tidbits of the day.

Want to choose the next Mark Scott? Two positions have opened up on the ABC board this year. The Communications Department is a seeking to replace Cheryl Bart and Steven Skala, whose terms end this month and in November this year respectively. To save money, the government is seeking to fill the two vacancies at the same time.

Whoever the new board members are, they’ll have to pass through the “independent” ABC and SBS board nominations panel, which will provide the top three candidates to the minister. The ABC and SBS boards spent a while waiting for new board directors last year, as the government delayed appointing new members to the nominations panel, set up under the previous government to ensure ABC and SBS appointments were non-political. Half the panel members appointed to search for such non-political candidates were appointed last year — they were Australian columnist Janet Albrechtsen and former Liberal Party deputy leader Neil Brown. Whoever passes muster through the nominations panel and the government will have the influential task of helping pick the new ABC managing director — Mark Scott’s second five-year term ends in June 2016.

It’s worth noting the department has chosen a new recruitment agency to vet candidates, after concerns were raised about the (lack of) vetting of SBS chair Nihal Gupta. Watermark Search International is receiving applications until June 19. A department spokesperson confirmed to Crikey it was the first time Watermark had been chosen to vet ABC and SBS candidates, although the agency has done other work for the department before. — Myriam Robin

Bad luck, shock jocks. It hasn’t been the best of ratings periods for the newly merged radio operations of Fairfax Media and Macquarie, according to the third metro radio ratings survey results released this morning. In fact, what stood out from the survey was the poor performances by the flagship AM talk stations of the new company in Sydney — 2GB and 3AW in Melbourne, and especially by shock jocks Alan Jones and Neil Mitchell.

Dominating the national figures was the plunge in Neil Mitchell’s morning audience in Melbourne on 3AW, with the beneficiary being Jon Faine, at ABC local radio’s 774, Mitchell’s bitter rival in mornings. A quarter of Mitchell’s audience fled 3AW as his share tumbled 4.1% to just 12.7% (from 16.7%). Faine’s share jumped from 12.4% to 15.0% and he now leads Melbourne radio in the mornings — talk and FM music included. Overall, 3AW’s share fall to 14.2% from 15.9%, a nasty fall of 1.7%. ABC 774 remains second with its overall share rising 1.3% to 11.8%, thanks mostly to the big share change in mornings.

In Sydney 2GB’s overall share was down for another survey period with a drop of 0.9% to 12.5% — it’s still first in the market with FM station, Kiis second with 9.4% (thanks to Kyle Sandilands and Jackie O in breakfast, even though their share eased to 10.2% from 10.4%). Ray Hadley also lost share (down 0.4% to 14.4%), and fellow 2GB host Chris Smith lost 0.7%. Losses were also taken in drive and evenings in what was a weak survey for 2GB and Fairfax.

A patron of the arts. Music title Tone Deaf has given a bit of thought to what the closure of mX will mean for local music:

“Avid mX readers will know that the paper was a strong supporter of local entertainment, particularly music, and shared gig listings and updates on all the live music happening in Melbourne, Sydney, and Brisbane each week, in addition to profiling local bands and artists.

“We were so sad to learn the news of mX, what a massive hole in the market they’ll leave,” On The Map PR Director Emily Cheung said in a statement to Tone Deaf. “mX have always been huge supporters of local up and coming talent.”

“[mX] supported a stack of our indie bands, offering heaps of coverage for our artists, which would noticeably add to our gig sales. Not to mention, it’s often a thrill for indie acts to have their own unique photoshoot and see themselves in a major paper. And it isn’t just indie music they support, it’s the arts, food and drink, and everything local. Saying goodbye to mX will be an enormous loss for the whole community.”

Despite its ever-trumpeted focus on print, News Corp shut down the free commuter paper last week, citing commuter interest in receiving their news and entertainment via mobile phones while in transit. It doesn’t appear mX staff were given much advance notice of their paper’s impending closure — the papers in Melbourne, Sydney and Brisbane didn’t inform their readers about mX’s demise until Friday’s edition, more than 24 hours after News Corp as a whole was informed through an email from Julian Clarke. mX staff were informed minutes earlier — too late, it seems, to have redone Thursday’s edition. — Myriam Robin

Some 62,000 against ad averaging. At Parliament House this morning, Nick Xenophon was this morning handed several hundred pages containing 62,000 names of people who’d signed a petition opposed to more prime-time advertising airing on SBS. Xenophon has last week indicated his opposition to the bill — he could prove one of several crucial votes in the Senate, after Labor and the Greens also indicated their opposition to the bill. Other crossbenchers, like Bob Day and David Leyonhjelm, have indicated their strong support.

Last week, the Senate committee the bill had been referred to recommended the Senate pass the bill. The committee had a majority of Coalition members — Labor and the Greens filed the dissenting report, and Xenophon filed his own report in dissent. In the main report, the committee noted that failure to pass the bill would require SBS to make cuts in programming to make up the loss of revenue, the multicultural broadcaster has said, after the government cut its funding last year. The committee also played down fears of what the extra advertising would do to SBS’ charter obligations, accepting SBS’ arguments that it was well able to handle the tension.

Update: An earlier version of this brief said Xenophon’s position on the bill was unknown. Actually, he indicated his position in his dissenting report last week.

‘Call me Caitlyn’. For a family so much in the spotlight, the final transition of Keeping Up With The Kardashian’s Bruce Jenner’s transformation to Caitlyn Jenner was a carefully guarded secret. When Jenner was finally ready to go public, Vanity Fair carefully guarded its exclusive. Mashable reports:

“For Vanity Fair, Jenner and her family, it marks the result of months of negotiations and work, as well as beefed up security to keep the story from leaking. The magazine hired security for the shoot and forced people to give up their cell phones to prevent anything from leaking. A spokesperson for VF told Mashable that the magazine had been in talks with Caitlyn Jenner since January and did not give her any compensation for the exclusive.

The magazine was concerned about leaks and took security measures “every step of the way,” including on the photo shoot, in the VF editorial office and at the printing plant for the upcoming issue. The story and pictures were done on a single computer that was never connected to the Internet, with the assets put on a thumb drive every night and then deleted from the computer. The story was even hand-delivered to the printer.” 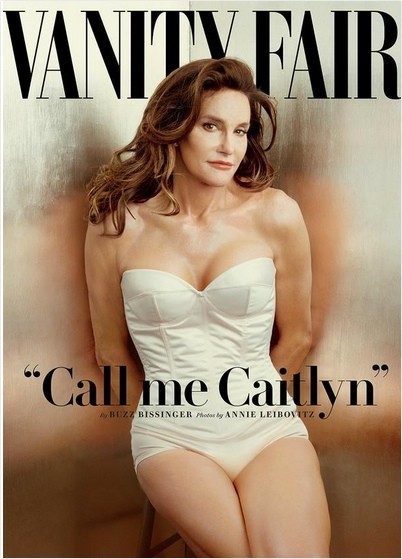