Essential: two to one in favour of same-sex marriage (but no vote-shifter)

Today's Essential Report shows Tony Abbott recovering in the eyes of voters back to the levels of December last year, when they merely disliked him. But there's still no budget bounce.

Australians support same-sex marriage by a margin of about two to one, today’s Essential Report finds, but 40% of voters say it makes no difference to how they’d vote.

However, it makes no difference to 40% of voters what the position of a candidate or party is on the issue.

Tony Abbott has improved in the eyes of voters since February, according to Essential’s periodic leader attribute question. In the areas out of touch, erratic and a capable leader, Abbott has improved noticeably since February, though only back to his level in December. So, in December, 66% of voters thought Abbott out of touch; that rose to 72% in February but is now back to 65%. Fifty-two per cent thought Abbott erratic in December, 60% in February and 54% this week. Thirty per cent thought him trustworthy in December; 27% thought it in February, 31% think it now.

Bill Shorten, however, has drifted slightly lower overall — flat on arrogant (39%) and trustworthy (33%); lower on capable leader (43%), down on understanding the problems facing Australia (49%). However, he retains a lead over Abbott in nearly every attribute: he betters the Prime Minister by between 20 and 30 points on narrow-minded, intolerant, out of touch, erratic and aggressive, and more than 10 points on intelligent, understands the problems facing Australia and superficial. 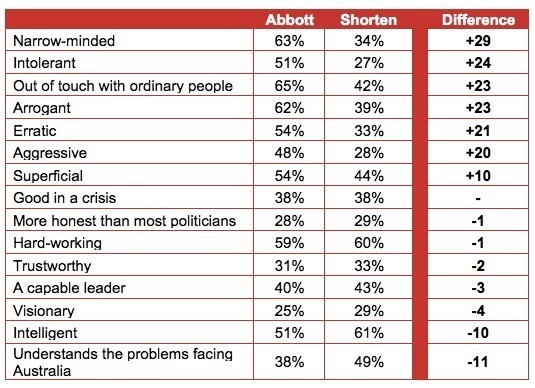 On voting intention, the Coalition remains on 41% and Labor has picked up a point to 40%; the Greens remain on 10% for an unchanged two-party preferred outcome of 52%-48% to Labor.

Three weeks after the budget, we’re thus able to conclude that there’s been no budget bounce for the government in voting intention, but that Tony Abbott has recovered in the estimation of voters — back to where he was in December 2014, which leaves him poorly regarded. Nearly two-thirds of voters believe the Prime Minister is out of touch; 62% believe he is arrogant, while 38% think he understands the problems of Australia. If Coalition strategists think embracing populism and abandoning economic reform was worth it for a 4% 2PP gap and voter dislike, then good luck to them.